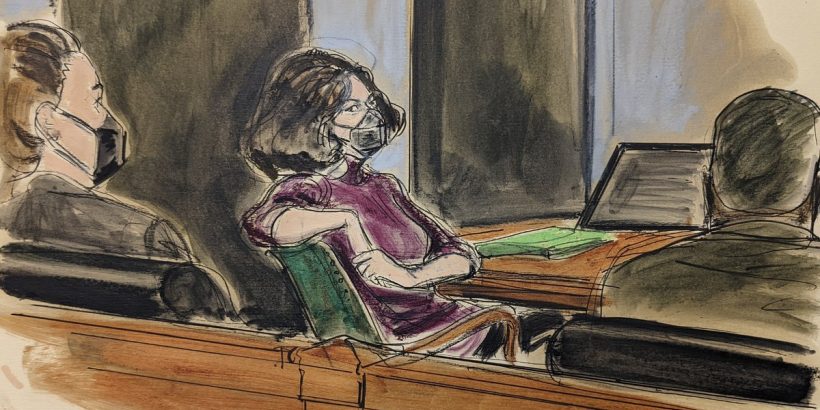 NEW YORK—Juror No. 50, who’s at the center of a possible mistrial in the Ghislaine Maxwell sex-trafficking case, appeared in federal court on March 8 where he plead the Fifth Amendment—the Constitutional right to refuse to answer questions in order to avoid incriminating himself.

The Honorable Alison J. Nathan, the judge who presided over the case in December, granted him immunity from prosecution with the exception of perjury.

Soon after the jury’s Dec. 29 guilty verdict on five of six counts of sex trafficking of a minor, Juror No. 50 stated publicly he was a victim of childhood sexual abuse and had made this known to his fellow jurors during deliberations.

At the center of the issue is the questionnaire potential jurors filled out prior to selection.

Juror No. 50 did not accurately answer questions relating to his childhood, sexual abuse at the hands of a stepbrother and his friend, prompting Maxwell’s defense to push for a new trial.

Nathan read the pertinent questions with his responses, which were written on Nov.4, 2021, the first day he reported for jury duty.

Juror No. 50 selected “no” to the first question that referred to sexual abuse, asking if he, a friend, or a family member had ever been a victim of it.

‘I was Super Distracted’

“Is ′no′ an accurate answer to that question?” Nathan asked him.

“No, it is not,” he replied and said the accurate answer is “yes.”

Juror No. 50 repeatedly cited the reasons for his incorrect answers.

One was he was sidetracked while filling out the questionnaire.

“At this point, I was super distracted,” he said and described sitting at the table at the spot where others were piling their completed paperwork and asking questions.

“I felt rushed only because of all the commotion going on in front of me,” he said.

A second was with the “sheer volume” of potential jurors, he didn’t anticipate being chosen.

Showed Remorse for Lack of Focus

The third reason was he didn’t consider himself a victim, so he breezed by the questions pertaining to victimhood.

Some of the questions referring to sexual abuse had boxes to check, that included “self” and “family and friends.”

Juror No. 50 stated multiple times, that in his haste, he never noticed the “self” boxes.

He showed remorse for his lack of focus calling it “one of the biggest mistakes I ever made in my life.” He said he did not intentionally give an incorrect answer.

“I skimmed. I didn’t read everything,” he said and described the questionnaire as “a pretty thick packet.”

Juror No. 50 also said several times that had he answered the questions accurately, he would still have been a fair and impartial juror and would have still have had the ability to render a fair and just verdict based on the evidence submitted at trial.

It was during a post-trial interview with a reporter when Juror No. 50 learned about the importance of his inaccurate answers.

“Did I just mess something up entirely?” he asked himself.

Juror No. 50 lawyered up in January with Todd A. Spodek, of Spodek Law Group in Manhattan.

Pleading the Fifth came as no surprise, as Spodek sent a letter to Nathan on March 1, alerting the court to his client’s decision to do so.

Juror No. 50 and Nathan looked directly at each other when speaking and he often replied with “yes, your honor,” and “no, your honor.”

Maxwell, who was present in the courtroom, was tried on trafficking minors for the sexual abuse of her employer Jeffrey Epstein.

Nathan gave both sets of attorneys the deadline of March 15 to file briefs regarding what they propose next.