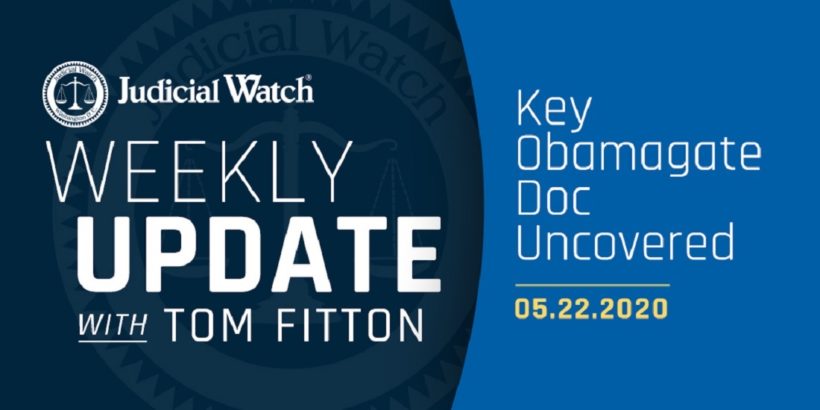 In a major development, Judicial Watch forced the declassification and release of an FBI memo or “electronic communication” (EC) that officially launched the counterintelligence investigation, termed “Crossfire Hurricane,” of President Trump’s 2016 presidential campaign.

We obtained the document that disgraced FBI official Peter Strzok wrote in our FOIA suit against the FBI and DOJ for: “The Electronic Communication that initiated the counterintelligence investigation of President Trump’s 2016 presidential campaign.” (Judicial Watch v. U.S. Department of Justice (No. 1:19-cv-02743)).

The redacted document details seemingly third hand information that the Russian government “had been seeking prominent members of the Donald Trump campaign in which to engage to prepare for potential post-election relations should Trump be elected U.S. President.” The document also alleges Trump campaign adviser George Papadopoulos claimed to an unnamed party that “they (the Russians) could assist the Trump campaign with the anonymous release of information during the campaign that would be damaging to Hillary Clinton.”

The document notes, “It was unclear whether he [Papadopoulos] or the Russians were referring to material acquired publicly of [sic] through other means. It was unclear how Mr. Trump’s team reacted to the offer. We note the Trump team’s reaction could, in the end, have little bearing of what Russia decides to do, with or without Mr. Trump’s cooperation.”

The document is dated July 31, 2016. Here is the text of the “electronic communication”:

This document contains information that is restricted to case participants

(U/ /) Legat [Redacted] information from [Redacted] Deputy Chief of Mission

Synopsis:
(U/ /) Legat [Redacted] received information from the [Redacted] Deputy Chief of Mission related to the hacking of the Democratic National Committee’s website/server.

Details:
(S/ /[Redacted] On Wednesday, July 27, 2016, Legal Attaché (Legat) [Redacted] was summoned to the Office of the Deputy Chief of Mission (DCM) for the [Redacted] who will be leaving [Redacted] post Saturday July 30, 2016 and set to soon thereafter retire from government service, advised [Redacted] was called by [Redacted] about an urgent matter requiring an in person meeting with the U.S. Ambassador. [Note: [Redacted]. The [Redacted] was scheduled to be away from post until mid-August, therefore [Redacted] attended the meeting.

(S/ [Redacted]) [Redacted] advised that [Redacted] government had been seeking prominent members of the Donald Trump campaign in which to engage to prepare for potential post-election relations should Trump be elected U.S. President. One of the people identified was George Papadopolous (although public media sources provide a spelling of Papadopoulos), who was believed to be one of Donald Trump’s foreign policy advisers. Mr. Papdopoulos was located in [Redacted] so the [Redacted] met with him on several occasions, with [Redacted] attending at least one of the meetings.

(S/ [Redacted]) [Redacted] recalled [Redacted] of the meetings between Mr. Papdopolous and [Redacted] concerning statements Mr. Papadopolous made about suggestions from the Russians that they (the Russians) could assist the Trump campaign with the anonymous release of information during the campaign that would be damaging to Hillary Clinton. [Redacted] provided a copy of the reporting that was provided to [Redacted] from [Redacted] to Legal [Redacted]. The text is exactly as follows:

(S/ [Redacted]) 5. Mr. Papadopolous [Redacted] also suggested the Trump team had received some kind of suggestion from Russia that it could assist this process with the anonymous release of information during the campaign that would be damaging to Mrs. Clinton (and President Obama). It was unclear whether he or the Russians were referring to material acquired publicly of through other means. It was also unclear how Mr. Trump’s team reacted to the offer. We note the Trump team’s reaction could, in the end, have little bearing of what Russia decides to do, with or without Mr. Trump’s cooperation.
(End Text)

(S/ / ) Based on the information provided by Legat [Redacted] this investigation is being opened to determine whether individual(s) associated with the Trump campaign are witting of and/or coordinating activities with the Government of Russia.

And so the document ends.

No wonder the DOJ and FBI resisted the public release of this infamous “electronic communication” that “opened” Crossfire Hurricane – it shows there was no serious basis for the Obama administration to launch an unprecedented spy operation on the Trump campaign. We now have more proof that Crossfire Hurricane was a scam, based on absurd gossip and innuendo. This document is Exhibit A to Obamagate, the worst corruption scandal in American history. This document shows how Attorney General Barr and U.S. Attorney Durham are right to question the predicate of this spy operation.

Included with each of our July, 2019 FOIA requests to the FBI and DOJ, which led to the production of this Electronic Communication document, was an April 2018 letter from the House Permanent Select Committee on Intelligence to the DOJ concerning a congressional subpoena for the same record.

We had previously received a production of 144 pages of emails between Strzok and former FBI attorney Lisa Page in which the Electronic Communication was discussed.

On July 31, 2016, Strzok sent an email under the subject line “Opening EC” to Jonathan Moffa, a deputy assistant director in the bureau’s Counterintelligence Division, Lisa Page and an unidentified FBI Office of General Counsel official.

Strzok: Hey just realized I need a succinct statement for the Opening EC. To open bidding I propose: [redacted]. Comments, please.
Moffa: I would recommend: [redacted].
Page: I like Jon’s additions and subtraction.
Strzok: Thanks. So: [redacted].