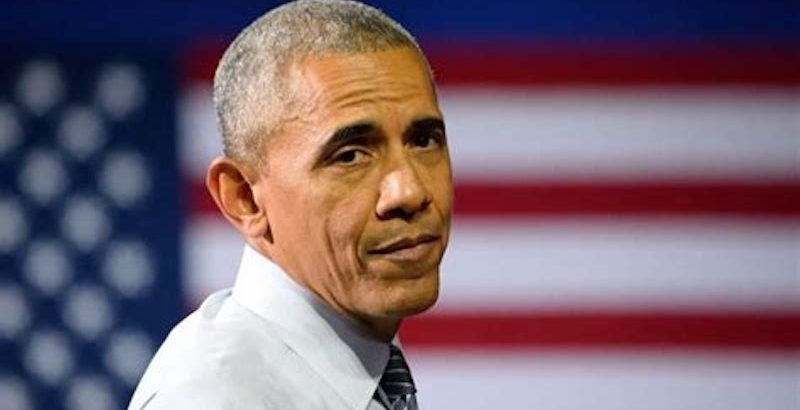 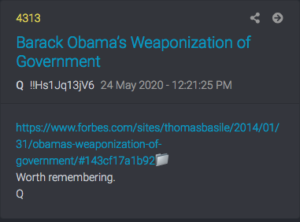 Former President Obama to this day, has many fans. People all around the globe supporting a more progressive approach to life loved what he stood for, as President of the US. Hollywood loves Obama, Millennials love Obama, and many Americans loved him for his prudent speech presentations, his eco-friendly agenda and his cool-cat persona.
Obama has often patted himself on the back saying, “I didn’t have scandals, which seems like it shouldn’t be something you brag about.” Those who weren’t so smitten with Obama saw right through his façade.
Written 6 plus years ago, this article is worth some scrutiny. It is a very well-written account of why Obama began losing credibility with the American people during his run as president.
Q post 4313 linked this today saying, “Worth remembering.” Did Obama actually weaponize our government and if so, what did it look like?
The GOP, formerly called the ‘Toothless Tiger,’ appears to have cut some teeth. Is the GOP finally ready to flush out this corruption and help take back our country? Is America worth fighting for? We must take a hard look at Obama’s corruption. It’s worth remembering.
Opinion ~ JoLynn Live (C-VINE Contributor)

When you analyze the public response to the State of the Union and the latest polling data, it’s clear that the President has lost a tremendous amount of credibility with the American public.  I scarcely think he cares at this point.  A tired, graying Barack Obama stood before Congress this week as a political figure, party leader, and progressive activist to make sure the Members understood one thing – he doesn’t need them.  In fact, he hasn’t needed them in quite some time.  After all, in his mind, it’s his government.  True, the speech wasn’t as “in your face” as conservative pundits predicted. To have done so would have been even less Presidential than we are used to from this White House.

Everyone in the House Chamber knew something that the American people have yet to fully grasp and Republicans have yet to demonstrate an ability to combat – that their government has grown so large, so complex, so involved in virtually every aspect of their lives, that it is now being used as a weapon to by a small segment of the ruling political class.

The weaponization of government is happening and it’s time Americans took notice.  For all the folks – primarily on the left – who screamed and yelled that the Patriot Act was shredding the Constitution, far more intrusive tactics that have nothing to do with the NSA or Homeland Security are being deployed right under our noses during this Administration.  Those tactics reduce every Americans’ personal and economic freedom.

There is a dangerous arrogance of power among the President and senior-level Democrats that should concern every American.

Last week a senior United States Senator gave a speech stating that the IRS should be used to target and punish groups that disagree with the Democratic Party’s political agenda.  Sen. Chuck Schumer stated, “…there are many things that can be done administratively by the IRS and other government agencies — we must redouble those efforts immediately.”  Schumer was also one of a number of Democrat Senators who signed a 2012 letter to the IRS demanding they be more aggressive against conservative organizations.  Sure, it was a story in primarily conservative media for a couple of days but no coordinated action between Republican elected officials and the conservative grassroots against Chuck Schumer is being contemplated. The Senate should be censuring him for suggesting that the IRS be used as a political weapon against conservative organizations.  Americans, however, should be calling for his head.

Last year, Lois Lerner, the IRS’ former director of Tax Exempt Organizations, publicly acknowledged the political, predatory and punitive actions of the agency that led to the harassment and intimidation of conservative groups.   Anyone who thinks that these IRS bureaucrats were acting solely in response to the Senators’ letter or of their own volition is kidding themselves.  This strategy was deployed by a cunning White House and the community-organizer-in-chief who still understands Saul Alinksy’s rule number 10 – “The major premise for tactics is the development of operations that will maintain a constant pressure upon the opposition.”

The IRS scandal is well-known and the misuse of the agency by the Democrat Party machine is still apparently going on.  However, the IRS is just one of dozens of other agencies under the control of this White House, many of which go unnoticed by the public and are virtually ignored by elected officials.

There are the new revelations about the Administration intimidating banks to prevent them from doing business with a number of legitimate businesses.  The until recently covert Operation Choke Point administered through the Departments of Justice and Treasury is already having an impact on the financial industry and other legitimate businesses the Administration is targeting.  According to the Wall Street Journal, J.P. Morgan, has been forced to cut ties with thousands of customers in the last year.  Sources indicate that out of fear of government scrutiny, the bank is ending relationships with customers even if there isn’t any sign that the customer has done anything wrong.  Other major banks have stopped offering certain popular, legal products or services because of government pressure.

Documents inadvertently leaked by the Department of the Treasury from a briefing on Operation Choke Point clearly show that the Administration is looking to significantly impact legal businesses because it believes the public needs to be protected from industries and customers deemed more likely to engage in criminal activity.  According to the Administration, those industries interestingly include ammunition sales, gun sales, home-based charities, gambling, pharmaceutical sales, short-term loans, raffles, Amway and Mary Kay-style sales businesses, and credit repair services.

The Administration is refusing to answer any Congressional inquiries about Operation Choke Point.

Then there’s the Consumer Financial Protection Bureau, once headed by Elizabeth Warren, also now a key cog in the Obama Administration’s effort to regulate industries and personal decision-making.   The CPFB is rapidly becoming, next to the Justice Department, the Administration’s agency of choice for extending the reach of government into our daily lives and stretching the limits of the law.  Unfortunately for Americans, this little-known agency is housed as part of the Federal Reserve so it exists outside of the direct pervue of Congress.  How convenient for the President.

As the Washington Examiner’s Richard Pollack recently reported, “they assume all businesses are predatory,” which allegedly gives them the ability to collect up to 96 separate data points from more than 1 billion credit cards.  That’s right – your government is now keeping tabs on how you spend your money.

Congress has asked CFPB questions about the consumer “snooping” program and has been given little in response.  The head of CFPB Richard Cordray did however inform Members of Congress that Americans cannot opt out or prevent this personal data collection.  That leaves us with the question – “Who’s going to protect us from the CFPB?”

So under the guise of consumer protection and fraud prevention, the Administration is using a range of Executive Branch agencies working together and separately to determine which products, services, payment methods, and other previously legitimate activities necessitate steep regulation and public defaming.  This will lead to not only an unconscionable interference with the free market but also a restriction of personal choice for every American.

When Obama wanted to go around federal immigration law, he instructed the Justice Department to ignore the portions of the law he didn’t like.  The same was done with welfare laws and drug laws.  Now he’s looking to unilaterally raise the minimum wage for federal workers.

Last week he indicated that no one should have to wait more than 30 minutes to vote.  Sounds like the kind of ambiguous language that could lend itself to loosening voting requirements or at least another innocuously-named government agency to “investigate” voter behavior.  Then there’s the Bank On USA program and its network of non-profit lenders which could soon be the vehicle for taxpayer funding of high-risk loans.  This list goes on and on.

While the runaway DOJ usually gets the headlines for abuses of power like Operation Fast and Furious, or suggesting to school principals that their disciplinary actions will be scrutinized for potentially racist overtones, the EPA is still playing partisan politics at the expense of both the environment and economy.

In just the last two weeks more EPA emails showed the coordinated effort between Administration policy-makers and environmental groups over the stalling of the Keystone XL Pipeline.  The Agency’s most recent ridiculous regulatory announcement actually banned the production and sale of 80 percent of the country’s wood-burning stoves.

Obama’s Executive Order on Climate Change last November, couched in terms of “storm readiness” could enable the government to withhold money to communities unless they meet new Federal environmental standards.  It could also be used to effectuate massive changes to land use regulations, while enabling the Administration to leverage its Climate Change data to influence a range of policies and private activities.

The Republican response, you might ask?  Well, it’s just more playing to the camera and half-hearted investigations while the White House pulls the strings of an Executive Branch that is almost entirely an island unto itself.  Republicans need to open their eyes to the broader range of tactics being used by the Executive Branch to stretch the limits of the law, attack the free market and pervert the Constitution.  Conservatives and Republicans continue to hack at each other while the Administration’s program rolls along in the executive bureaucracy – much of it without fanfare.

Our system of government is based on checks and balances.  Ever since the beginning of the 20th Century, the Executive has, to one degree or another, been the dominant branch of government in large part due to the explosion of the Federal bureaucracy.  Hundreds of agencies, departments, programs, task forces, and commissions are an arsenal that in the wrong hands can be used against the very freedom the government is supposed to uphold, protect and defend.  Rest assured, it’s in the wrong hands.  It’s time the toothless tiger called the GOP crafted a full-throat-ed strategy to investigate, expose and counter Barack Obama’s weaponization of government.