Huge rats are seen running all over rotting garbage creating a breeding ground for typhus-carrying fleas. Mountains of filthy-smelling trash are left for months on end with no cleanup crews in sight. Despite promises from the mayor, the city continues to ignore the growing heaps of garbage and ever-increasing health hazard.

Is this what Liberal politicians do to our beautiful cities?

By Joel Grover and Amy Corral

After reporting LA’s most notorious trash pile to the city’s 311 services hotline, the I-Team was told it could take up to 90 days before it’s cleaned up. An expert says there’s no time to waste

Rat-infested piles of rotting garbage left uncollected by the city of Los Angeles, even after promises to clean it up, are fueling concerns about a new epidemic after last year’s record number of flea-borne typhus cases.

Even the city’s most notorious trash pile, located between downtown LA’s busy Fashion and Produce districts, continues to be a magnet for rats after it was cleaned up months ago. The rodents can carry typhus-infected fleas, which can spread the disease to humans through bacteria rubbed into the eyes or cuts and scrapes on the skin, resulting in severe flu-like symptoms.

The NBC4 I-Team first told Mayor Eric Garcetti’s office about the piles of filth in the 700 block of Ceres Avenue in October. At the time, he promised to make sure trash doesn’t pile up like that.

The garbage was cleaned after the interview, but conditions have worsened over the next seven months. 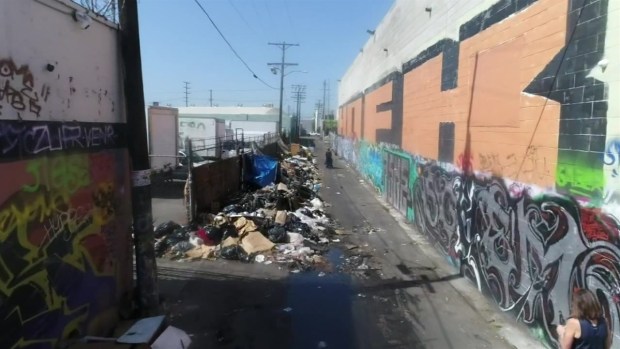 Photo taken from drone video shows a sprawling trash pile about a block long between downtown Los Angeles’ Fashion and Produce districts. The heap of waste was cleaned up last year, but has returned months later, offering an attractive source of food for rats.

“I can’t walk down the street without thinking that a flea could jump on me,” said Estela Lopez, who represents business owners in the area.

After reporting the pile of waste to the city’s 311 services hotline, the I-Team was told it could take up to 90 days before it’s cleaned.

An out-of-control rat population can even lead to the spread of dangerous strains of salmonella and bubonic plague, he noted.

Other large U.S. cities, like New York and Washington DC, have teams devoted to aggressive rat control. In the nation’s capital, they’re experimenting with bait stations laced with a rat contraceptive. 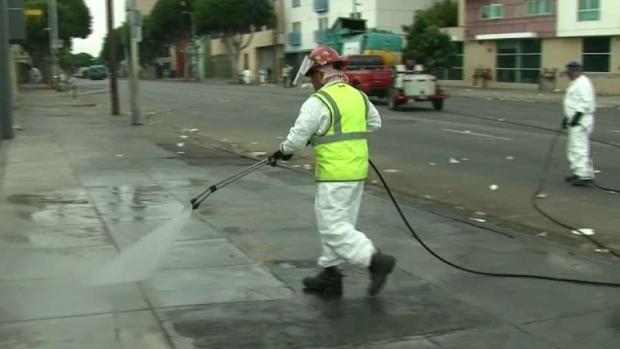 But in Los Angeles, the I-Team learned there is no plan or program to control the growing rat population that feasts at trash piles like the one on Ceres Avenue.

“It’s something that we’ll look into,” said Pepe Garica, of Los Angeles’ bureau of sanitation.

Between 2013 and 2017, county residents reported a yearly average of nearly 60 cases. That’s twice as many the number reported in the previous five years.

Symptoms of flea-borne typhus, which can start within two weeks after infection, include high fever, headache, chills, and body aches. Rashes can appear on the chest, back, arms and legs. Fatalities occur in less than 1 percent of cases.

The I-Team asked the Department of Public Health what became of the shelter animals carrying fleas that tested positive for typhus. We are still waiting to hear back.