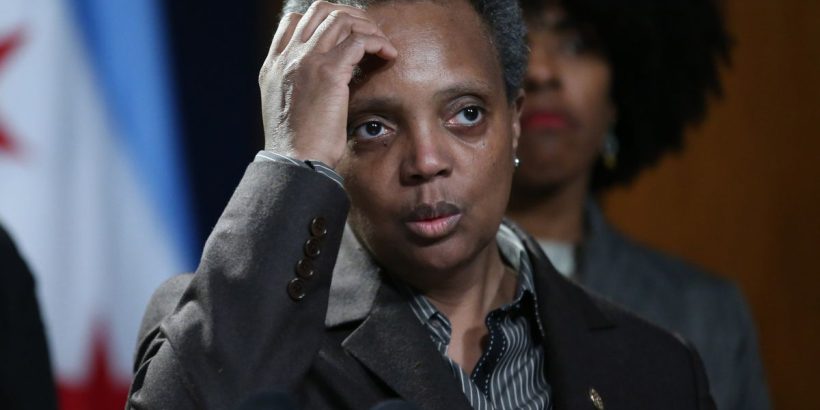 “To my friends in the LGBTQ+ community—the Supreme Court is coming for us next. This moment has to be a call to arms,” the Democrat mayor posted. It’s not clear why she linked the “LGBTQ+ community” with the Supreme Court’s likely decision to overturn Roe v. Wade, which concerns whether women have the constitutional right to obtain abortions.

She added in another Twitter post: “We will not surrender our rights without a fight—a fight to victory.”

“I think everybody who saw that draft opinion has gone through a range of different emotions,” Lightfoot told the left-wing outlet. “But we can’t just be angry. We’ve got to be intentional, we’ve got to be dedicated.”

She added: “And that’s why I’m calling upon fellow elected officials across the country, and particularly my fellow mayors to join me in making a pledge that we made today, which is a justice for all pledge. And fundamentally, it reaffirms Chicago as a welcoming city, a city that doesn’t discriminate, and a city that’s going to stand with women.”

But her Twitter comments came in the backdrop of left-wing protesters going to the homes of several Supreme Court justices over the weekend and an alleged Molotov cocktail attack on a pro-life group in Madison, Wisconsin, while a vandal wrote pro-abortion rhetoric on the walls of the office. The White House condemned the attack in a statement released Monday. Virginia Gov. Glenn Youngkin, meanwhile, announced he would enhance security around the homes of the Supreme Court justices who live in his state.

“Lori Lightfoot just issued a ‘call to arms’ to her fellow radicals directly on Twitter,” wrote Rep. Lauren Boebert (R-Colo.). “While people are being slain in her streets on a daily basis, all she can worry about is endangering more lives with her reckless words. Shame on her. She should resign.”

Others called on Twitter to remove Lightfoot from the platform, claiming her post was an incitement to violence.

After the draft opinion was leaked to Politico, Chief Justice John Roberts confirmed that the opinion, written by Justice Samuel Alito, was authentic. However, Roberts said the draft doesn’t represent the current or final opinion of the Supreme Court, while he added that an investigation is now underway.

The Epoch Times has contacted Lightfoot’s office for comment.