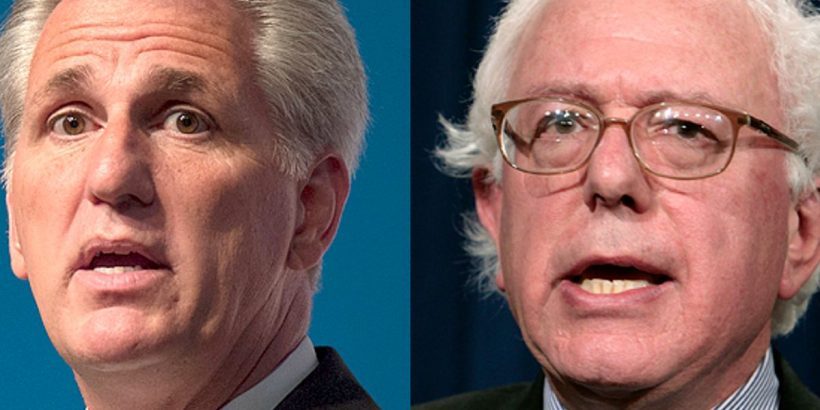 McCarthy tweeted a critical meme on April 29, the day that marked Biden’s 100th day in office, accusing the president of a “tax-and-spend agenda that makes Bernie Sanders look like a conservative.”

Biden on Wednesday unveiled his newest spending proposal, the $1.8 trillion American Families Plan, a vast expansion of the federal social safety net in the areas of education, and health, and child care. Together with the $1.9 trillion American Rescue Plan that passed with zero Republican votes, and the proposed $2.3 trillion American Jobs Plan, this brings Biden’s early-term spending to a dizzying $6 trillion, drawing sharply critical reactions from Republicans, and even some muted criticism from Democrats.

In a statement, McCarthy accused Biden of “bait-and-switch” for promising bipartisanship governing “as a socialist.”

“President Biden abandoned his promise to govern with bipartisanship on day one and has committed to implementing a far-left, socialist agenda,” McCarthy said in the statement. “This bait-and-switch hasn’t gone unnoticed by the American public, with 60 percent recently reporting that they want Biden to stick to his promise of working with Republicans to get things done,” McCarthy added, referring to a recent ABC-Washington Post poll that found 60 percent of Americans said Biden should try to get Republican buy-in on his proposals by making major changes to them.

“Last night, President Biden talked about unity and togetherness. But he delivered a multi-trillion-dollar shopping list that was not even intended to earn bipartisan buy-in. A lengthy liberal daydream that would force American families’ lives into Washington Democrats’ mold,” McConnell wrote in a tweet.

McCarthy elaborated on the notion that Biden’s policies made him look more progressive than Sanders, telling Fox News in an interview Wednesday that he raised the issue with Sanders directly after the president’s speech in Congress.

“I asked the senator, ‘Did you ever think you would be more conservative than the president?’” McCarthy told host Sean Hannity.

Asked how Sanders reacted, McCarthy replied, “He looked at me and laughed. But he understood what I was saying to him.”

Biden on Thursday spoke at a drive-in rally in Georgia, seeking to build public support for $4 trillion in new spending on infrastructure and social programs, calling for corporations and wealthy Americans to pick up the tab via tax hikes.

Biden is scheduled to travel to Pennsylvania and Virginia in the days ahead to promote his spending and tax plans.