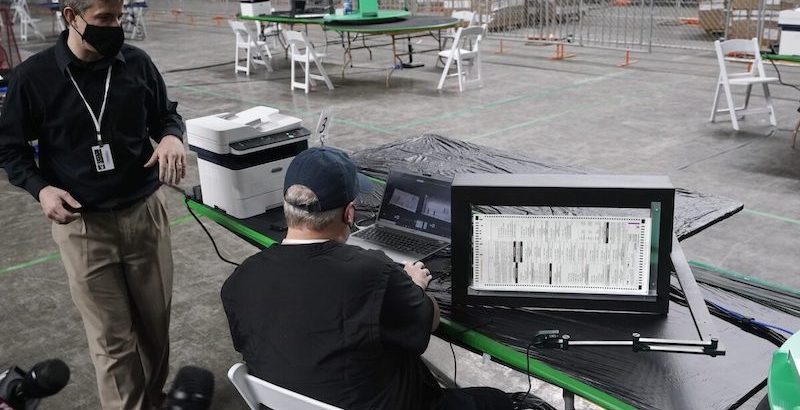 Distractions are put in place by the enemy, so keeping an eye on the audits is critical. This is where they don’t want us to look.

When we read about wildfires? Watch the audit!

The Capitol Murder? Watch the audit!

Aliens from Mars? Watch the audit!

See the diversions? See the connection? Watch the audit!

Maricopa County Election Audit on Pace to Be Done by Deadline: Official

The 2020 election audit taking place in Arizona’s largest county is on pace to be done by next month’s deadline, an official said on April 28.

“The count is picking up significantly every day and with the additional shifts that we’re planning to put on, and other improvements in the process, we’re on a pace to get the job done in the time we have here at the coliseum,” former Arizona Secretary of State Ken Bennett, the state Senate’s liaison for the Maricopa County audit, told reporters.

Bennett was speaking outside the Arizona Veterans Memorial Coliseum in Phoenix, where contracted workers and volunteers are reviewing 2.1 million ballots cast in the 2020 election. The audit also includes a review of 385 tabulators and other machines used last year.

Bennett wasn’t able to provide an update on how many ballots have been audited; as of April 28, the number was just shy of 100,000.

The Senate has reserved the arena for the audit until May 14.

“We’re doing things that will get us to a number of ballots per day that will allow us to be done with the counting by May 14,” Bennett, a Republican, told reporters.

The audit started on April 23. A judge on April 28 rejected an attempt by Democrats to halt the process.

Democrats assert that Cyber Ninjas and the three other firms that the state Senate hired to carry out the audit aren’t properly trained and haven’t installed proper security procedures.

Lawyers for the Senate had told the judge that delaying the audit would result in slowing the state Legislature’s weighing of election reform bills, because the audit results will directly inform the legislation.

Bennett and other officials involved in the process have argued that ballots and machines are being secured well, by armed guards, and that voter privacy is being protected.

The liaison said he was “very pleased” with Martin’s ruling.

Republicans, including state Senate President Karen Fann, say the audit is meant to restore public confidence in elections, noting that polls suggest about one in two voters in the state aren’t confident in the 2020 results, which saw Democrat Joe Biden, who went on to become president, win the state over former President Donald Trump.

Democrats, including Arizona Secretary of State Katie Hobbs, say the audit will change nothing and will actually undermine confidence in the elections.