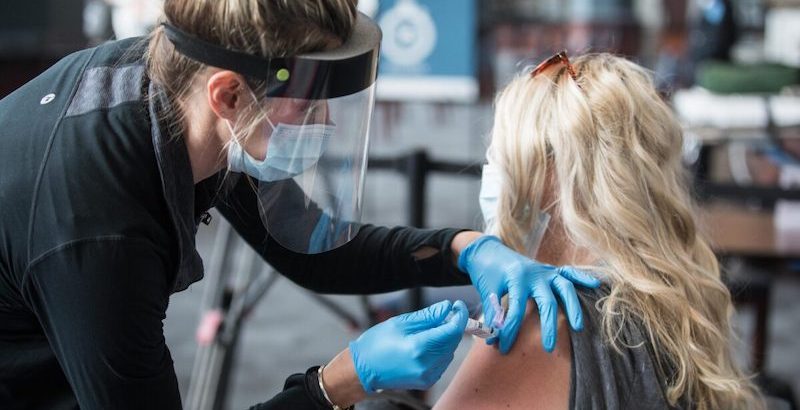 Anyone who has experienced a miscarriage understands the grief which accompanies it. When I had my first miscarriage, even after seven successful births, I was devastated.

The range of pity I received from acquaintences, friends, extended family and immediate family was vast. “I’m so sorry, … how are YOU doing?” to “Maybe it’s God’s way of telling you it’s time to quit!”

I knew I did nothing to cause my miscarriage and in spite of my grief, I chose to move on while I healed.

When we place our faith in others, expect them to be truthful, hope they have our best interest in mind, the outcome can be devastating when it is realized our good faith in them is not returned.

Many women have placed their faith in the CDC believing science will protect them. We now have learned that the COVID-19 vaccine has possibly been linked to miscarriages, still-births, palsy and other alarming health concerns. Is science no longer protecting pregnant and lactating women?

Does the CDC suggest pregnant and lactating women get the COVID vaccine without consulting their physician? According to their handbook, a select group of these women are not encouraged to do so.

To some, the COVID vaccine seems more risky than taking an Advil, yet the warning label on the latter recommends consulting their physician prior to use. Are patients being informed of possible health risks prior to vaccination?

Science proves 99.5% and higher heal from COVID. Is a vaccination really necessary?

Patients have the right to know what the vaccine ingredients are, and also if there is a risk of an Iatrogenic Reaction due to ingredients within the vaccine, or their additional medications reacting to it.

To date, there are not enough peer-reviews to guarantee a baby’s safety. Is getting a vaccine during pregnancy worth the risk? It’s one thing to miscarry just because. It’s another to miscarry due to lack of knowledge.

Thirty-four cases of pregnant women experiencing spontaneous miscarriages or stillbirths after receiving a COVID-19 vaccine have been submitted to the Vaccine Adverse Event Reporting System (VAERS).

VAERS is a passive reporting system that allows people to submit a report of an adverse event after vaccination and is run by the Food and Drug Administration (FDA) and the Centers for Disease Control and Prevention (CDC). Research funded by the CDC has shown that fewer than 1 percent of reactions from vaccinations are being reported on VAERS.

Reports made to VAERS do not necessarily mean that a vaccine may have caused the event or reaction. Miscarriages are labeled as spontaneous abortions or abortions in the reporting system.

Many cases of spontaneous miscarriages occurred in the first trimester, or the first 12 weeks of the pregnancy, with 25 occurrences after being immunized with a Pfizer-BioNTech vaccine. While the four cases of stillborns occurred in either the second (weeks 13-27) or third trimester (weeks 28-40).

According to Verywell Health, an online resource on health-related issues: “Research suggests that between 10% and 20% of women with a medically confirmed pregnancy will end in miscarriage. Eighty percent of these will occur during the first trimester.”

In one case, a physician in Tennessee, at five weeks pregnant, suffered a miscarriage 13 days after being immunized with a Pfizer vaccine. The 31-year-old woman had no known allergies or medical history.

While a 33-year-old Indiana nurse in her third week of pregnancy had a miscarriage five days after receiving her second Pfizer vaccine. She also reported that the adverse event caused a birth defect.

And a 32-year-old woman in Virginia who was eight weeks pregnant reported having a miscarriage five days after being injected with the first dose of a Moderna vaccine in January. She had consulted with two obstetrics and gynecologists (OB-GYN) prior to receiving the vaccine on Jan. 14. She experienced abdominal cramping and vaginal bleeding two days later and had a miscarriage on Jan. 19. She had only been taking prenatal vitamins.

In Michigan, a 35-year-old woman who was 28 weeks and five days pregnant said that the baby’s movements decreased two days after her first Pfizer vaccine in December 2020. The woman delivered a stillborn baby weighing two pounds and seven ounces at 29 weeks. She was being closely monitored for an umbilical cord abnormality called velamentous cord insertion.

Both Pfizer and Moderna did not respond to a request by The Epoch Times for comment.

In addition, the FDA did not reply to The Epoch Times’ inquiry on whether the regulatory agency will be looking into the VAERS report. An FDA spokesperson told The Epoch Times in an email that their subject matter experts working with vaccines are “quite busy” at the moment.

Dr. Shelley Cole, MD, an OB-GYN and a member of America’s Frontline Doctors, says it’s concerning that a vaccine still in an experimental phase is being recommended to pregnant and lactating women and that science is no longer protecting them.

“As an obstetrician-gynecologist, it is a concern,” Cole told The Epoch Times. “We’re [now] throwing science and the scientific medicine method out the window and jeopardizing pregnancies and future pregnancies.”

“It concerns me that the CDC says that there are no studies,
but it’s okay to get it and you don’t even need to discuss it with your doctor,” Cole added. “I mean this is the opposite of everything that the scientific models and methods, and standard of care has been for a century.”

In its guidance on “Vaccination Considerations for People who are Pregnant or Breastfeeding,” the CDC says that pregnant or lactating women who are “part of a group recommended to receive COVID-19 vaccine, such as healthcare personnel, may choose to be vaccinated” and that they are not required to discuss with their doctor “prior to vaccination” even though there is limited evidence “available on the safety of COVID-19 vaccines” in this group.

There is also no safety data on the “effects of mRNA vaccines on the breastfed infant or on mild production/excretion,” yet the vaccine is “not thought to be a risk to the breastfeeding infant.”

The World Health Organization (WHO), in a news release on Jan. 8, said it does not recommend the Pfizer COVID-19 vaccine for pregnant women unless they are at high risk of exposure, such as a health care practitioner.

“Pregnant women are at higher risk of severe COVID-19 than non-pregnant women, and COVID-19 has been associated with an increased risk of pre-term birth,” the WHO said. “However, due to insufficient data, WHO does not recommend the vaccination of pregnant women at this time.”

The WHO initially put out the same recommendation for the Moderna vaccine on Jan. 26, but revised it three days later, saying “we don’t have any specific reason to believe there will be specific risks that would outweigh the benefits of vaccination for pregnant women,” thus pregnant women in the health care environment or “who have comorbidities which add to their risk of severe disease” may receive the vaccine.

Pregnant or lactating women were excluded from both the Pfizer and Moderna COVID-19 vaccine trials, but Pfizer is currently conducting a phase 2/3 trial on 4,000 healthy, pregnant women who will be given the shots during the second and third trimester.

Governmental health agencies and health care personnel who recommend the vaccines claim that pregnant women “have an increased risk of severe illness, including illness that results in ICU admission, mechanical ventilation, and death compared with non-pregnant women of reproductive age.”

Dr. Denise Jamieson, MD, MPH, chair of the Department of Gynecology and Obstetrics at Emory University School of Medicine, recommends pregnant women get the vaccine regardless of what trimester they are in and recognizes that safety data is lacking.

“If you’re a health care worker in a healthcare setting, you’re at risk every day,” Jamieson told JAMA Network on Feb. 8. “So I would advise to get vaccinated soon and not delay regardless of the trimester.”

“I think one of the other things that’s really important is just because we think the benefits outweigh the risks, that doesn’t let us off the hook in terms of describing the risks,” Jamieson added. “And I think that’s one thing that I’m concerned about is that, you know, 15,000 women have been vaccinated, pregnant persons have been vaccinated, and yet we really have stunningly little safety information and that’s not okay.”

The current CDC guideline for COVID-19 positive patients is to isolate at home and monitor symptoms while staying hydrated and taking “over-the-counter medicines, such as acetaminophen.” Medical treatments are only available for hospitalized patients.

Cole—while certified in OB-GYN, now focusing only on gynecology—has treated over 550 patients with COVID-19, and says she understands the fear pregnant women may have of contracting a severe illness from COVID-19.

But she disagrees with the CDC, saying people have the option of being treated early with hydroxychloroquine instead of waiting until the disease progresses requiring hospitalization. She also recommends taking 1000 milligrams of vitamin C twice a day and “2000 to 5000, international units a day” of vitamin D to help strengthen the immune system.

Individuals should discuss with their physician before taking the supplements.

“So it is scary, it is scary, but the vast majority of women that are pregnant are under the age of 40, the death rate is extremely low,” Cole said. “And people do not have to go to the hospital if they’re treated early, or if they use early prevention.”

Hydroxychloroquine is an FDA-approved medication in use for 65 years to treat lupus, rheumatoid arthritis, and malaria. It is prescribed to various groups of people including pregnant or lactating women, children, and immune-compromised individuals. 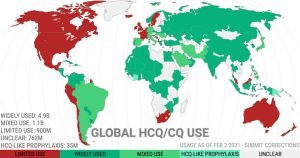 The politicization of the drug continues to overshadow studies that show hydroxychloroquine is safe and effective in treating COVID-19.

According to c19study.com that tracks clinical trials on hydroxychloroquine around the world, all 27 hydroxychloroquine studies on early treatment reported a “positive effect and an estimated reduction of 65 percent in the effect measured (death, hospitalization, etc.)” However, the drug is “not effective when used very late with high doses over a long period.”

The FDA says hydroxychloroquine is not approved for the treatment of COVID-19.

Vaccine manufacturers that were granted an emergency authorization from the FDA are given immunity from liability for any adverse event that may be experienced after receiving a COVID-19 vaccine. Individuals injured from the vaccine must file a claim within one year and prove their injury under the Countermeasure Injury Compensation Program, established as a result of the Public Readiness and Emergency Preparedness Act (pdf) in 2005.