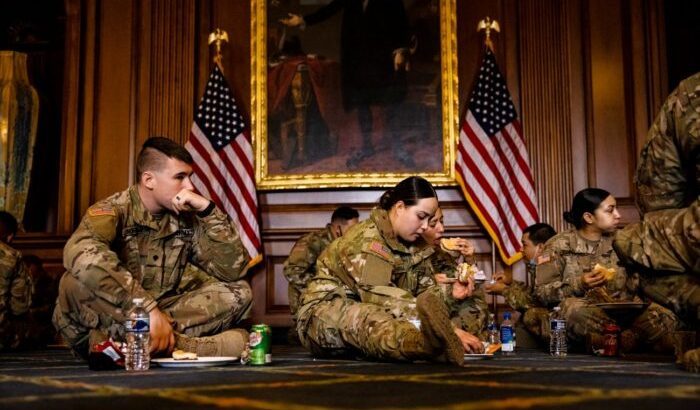 BY THE DAILY CALLER NEWS FOUNDATION

Members of the National Guard allegedly found metal shavings in over 70 meals and some were made sick by undercooked meat on Sunday, an ABC affiliate reported Monday.

A Michigan National Guard staff sergeant whose identity is being withheld said this is a common problem for service members stationed at the U.S. Capitol building following the Jan. 6 riot, 7 Action News reported.

“Yesterday, for instance, there were 74 different meals found with raw beef in them,” the sergeant said, 7 Action News reported. The sergeant also said “soldiers had found metal shavings in their food.”

While the quality of provided meals has been a problem, the sergeant reportedly said that service members frequently don’t get enough to eat, according to 7 Action News.

“You were getting maybe a Danish and some sort of juice,” the sergeant said, 7 Action News reported. “And then we had certain days where it was clearly a dinner role and Sunny D.”

“They said alright, we’re going to make sure we spot check them. And we’re also going to start having them add temperatures to it,” the sergeant said. “At 140, you cook that chicken, undercook it to 140, and now you’re telling… you’re telling us that it’s… a 30-minute drive. This is what they say on the little placard that’s (inaudible) good for four hours. No, it’s not. It wasn’t good from the start and now it’s had hours to become even more dangerous.”

Over a dozen service members were in the hospital after consuming undercooked food and falling ill, 7 Action News reported. After several complaints about the quality of the food provided, Democratic Michigan Gov. Gretchen Whitmer reached out to the acting secretary of the army.

The National Guard described the meals as concerning and unacceptable in a statement provided to 7 Action News. The meals were provided as part of a contract with the Washington, D.C. National Guard to provide food for Michigan’s 1,000 service members.

The National Guard is expected to stay at the U.S. Capitol until March 12, Secretary of Defense Lloyd Austin said, The Hill reported. Austin did not rule out any potential threats and said the guard will remain stationed to protect lawmakers.