In the article below, several North Carolina school systems are coming around to the idea that they are in charge of, not the parents, what their child identifies as gender speaking.

A second district developed a plan to pair children with adults in schools to support minors as they change their “genders.”

New Hannover County schools are allowing teachers to hide circumstances where children change their gender at school, according to documents obtained by Education First Alliance.

The district, which includes Wilmington and Carolina Beach, developed a “gender support plan” back in 2020 which asks teachers to establish a “shared understanding” about how to support a child’s “authentic gender” at school.

On a scale of 1-10, teachers rank how supportive they think the parents of a child who wants to change their gender are. Then a plan is asked for dealing with unsupportive parents during the “gender change” process. In addition, the form asks teachers to identify an adult at the school who would provide support to the gender-bending student.

At the unveiling of the new plan, the New Hanover Title IX coordinator Jarelle Lewis said that he “borrowed” it from the University of North Carolina at Wilmington and then adapted and modified the model for K-12 students. Later Lewis explained that schools have a duty to balance parents’ rights against students’ requests.

Earlier this year we reported that Orange County schools have a similar code of silence clause in their “gender support plan,” which asks teachers:

These “gender support” plans are popping up across the state, likely because students are being groomed into changing their gender in all K-12 schools through social-emotional learning (SEL) requirements. North Carolina’s SEL provider, CASEL, defines the program this way:

SEL is the process through which all young people and adults acquire and apply the knowledge, skills, and attitudes to develop healthy identities, manage emotions and achieve personal and collective goals, feel and show empathy for others, establish and maintain supportive relationships, and make responsible and caring decisions.

Senate bill 476, then policy SHLT-003 from the State School Board, requires SEL lessons to be taught in all 12 academic subjects in North Carolina schools. SEL lessons often contain transgender propaganda, like this kindergarten exercise given in Moore County: 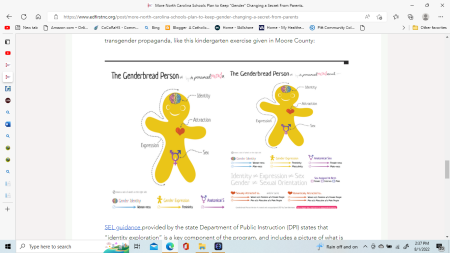 SEL guidance provided by the state Department of Public Instruction (DPI) states that “identity exploration” is a key component of the program and includes a picture of what is clearly a boy dressed up in a girls’ blouse.

According to North Carolina’s constitution, the forming of a child’s identity is the responsibility of parents – not the government.
News stories researched and posted by our team of volunteer citizen journalists.