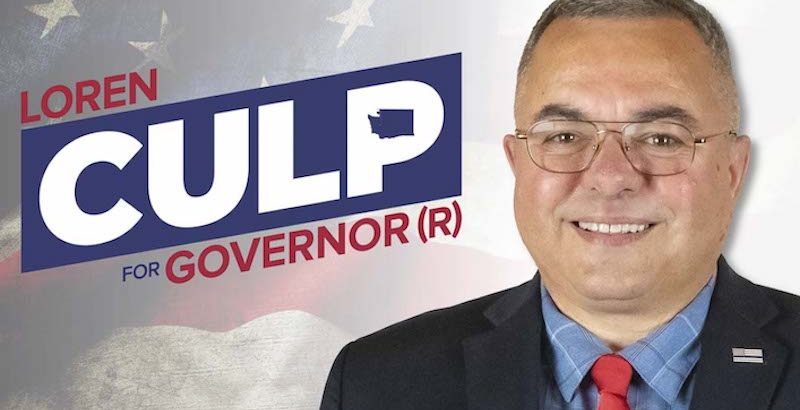 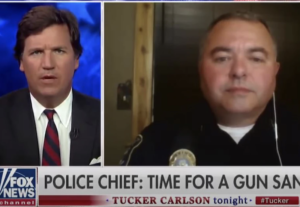 WASHINGTON STATE: Former Republic, WA, police chief, Loren Culp, made headline news in 2018, for his refusal to charge Washington State citizens with arrest if their firearms were stolen, then involved in a crime. He believed this violated the rights of citizens based on the U.S. Constitution.

When his Facebook post went viral regarding his stance against the Initiative 1639 gun control laws, he soon found himself on the Tucker Carlson show.

He was one of a very few law enforcement officers in Washington State to publicly take a stand along side of the citizens, and soon became a hero to the millions of law-abiding residents of Washington State who support the 2nd Amendment of the Constitution.

When he eventually threw his hat in the ring, Loren Culp began rallying across Washington State every day, even campaigning numerous cities in a single day!  The outpouring of support grew as Culp traveled from city to city listening to Patriots’ concerns of an economic collapse and draconian measures put in place by the current governor.

In 2011, Washington State became the second state in the country to exclusively commit to mail-in voting. Oregon was the first state, which enacted its law in 2000.

In spite of his efforts, the results of the 2020 election revealed Loren Culp lagged too many votes behind Governor Jay Inslee, Washington’s governor since 2012.  The governorship for Washington State, once again, was handed to Inslee.

Attorneys, Sidney Powell, Lin Wood and Rudy Guiliani along with countless others, say they have uncovered severe voter and election irregularities in the 2020 Presidential election. Upon further investigation, it is said videos, documentation and testimony of voter fraud occured through mail-in ballots and through election software.

Because Washington State is a mail-in only state, it made sense to seek an audit of the votes to be certain every vote cast was indeed tabulated properly. It is for this reason, Loren Culp has not conceeded his bid for governor in the 2020 election and has filed suit against nine county auditors.

In the lawsuit, the Culp campaign claims the voter registration address list shows “many discrepancies and anomalies which destroyed the integrity of the vote in Washington.”

Loren Culp’s broadcast; Loren Live: VMG has given residents of Washington State hope and deep appreciation for his fight for election integrity. The voice of Loren is indeed the voice of the people. In accordance with the U.S. Constitution, citizens have every right to verify the election and that is exactly what Loren Culp plans to do.

Loren Culp is a fighter and has always stood for what is right. With election integrity, every vote matters. Ballots do not reflect voter integrity, but signature verification does.

“…If there was one illegal vote cast, then it cancels out one legal person’s vote.
That might be your vote that gets canceled out. When you have hundreds of thousands of illegal votes, that changes history…and we can’t allow it.”  ~Loren Culp

Regardless of the party; Democrat, Republican, Independent, etc., every voter wants the truth and they want their vote to count. If there is nothing to hide, why not audit this election? Wouldn’t that put everyone’s mind at ease?

Spokane County Election’s Auditor, Vicki Dalton, said that due to lack of information regarding irregularities, no investigation could follow. However, Loren and his attorneys found the stats and the data on public state and county websites. “Anybody could look it up,” says Culp.

Now that the information has been officially filed with the court, it has become public knowledge.

While Jay Inslee (D) received 2,294,243 votes, Loren Culp (R) received 1,749,066 votes, a difference of 545,177 votes. If irregularies happened in the magnitude Loren Culp is suggesting, and if he has not conceded, it could mean the election for Washington State could be overturned possibly giving the seat to Culp.

Election fraud is nothing new, but in the past it happened on such a miniscule scale, it was not visible to the public. This is why the MSM and social media platforms are refuting election fraud and censoring posts discussing it. They have gone so far as to challenge ‘deplorables’ to prove it. So, guess what?

Between November 3, 2020 and January 6, 2021, President Trump has accepted their challenge and is showing the American people and the world how vast the 2020 election fraud really was. Mail-in ballots, printing of ballots, a lack of signature verification, using the Dominion Voting System all can be proven to have embraced election and/or voter fraud. This system is rigged and the people are waking up to the truth!

Washington State used the Dominion Voting System. Therefore an audit needs to take place as well as challenge those in charge of the election. If Inslee won, then so be it, but if enough votes are found to be fraudulent that can overturn the election, the governorship rightly belongs to Loren Culp.

“There will be things coming to light in a big way, very soon,” says Culp.

Loren Culp is the author of the book, ‘American Cop,’ and former Police Chief of Republic, Washington.