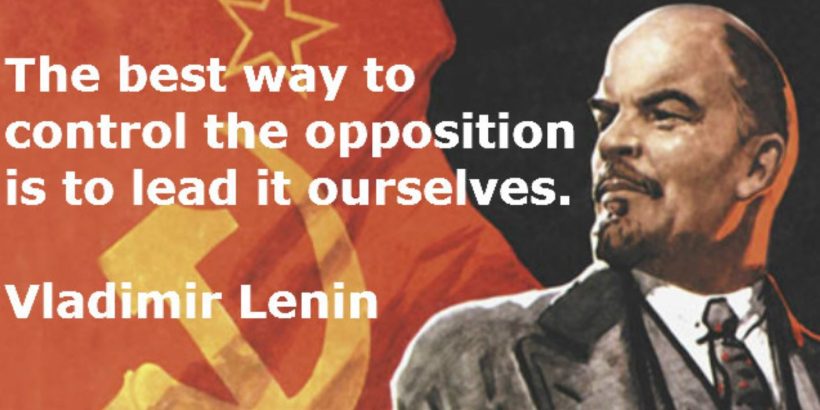 Sometimes, once you finally see and UNDERSTAND something that previously eluded you… you then can’t un-see it. Your vision is cleared and can automatically discern when it is seen again.

A controlled opposition is a protest movement that is actually being led by government agents.

Nearly all governments in history have employed this technique to trick and subdue their adversaries.

Notably, it was Vladimir Lenin who said; “The best way to control the opposition, is to lead it ourselves.”

Controlled Opposition: a strategy in which an individual, organization, or movement is covertly controlled or influenced by a 3rd party and the controlled entity’s true purpose is something other than its publicly stated purpose.

The controlled entity serves a role of mass deception, surveillance and/or political/social manipulation.

In most cases the controlled party is portrayed as being in opposition to the interests of the controlling party.

💢Preempt or neutralize true but negative information by having it be disclosed or championed in a skewed/stigmatized manner by a person or group.
💢The truth can be peppered with disinformation
💢or the truth of the message can be neutralized by association due to the extreme, radical, or unpalatable positions held by the controlled entity (person or group) who is disclosing the information or is “championing” a position.
💢The stigmatized or adulterated truth in turn steers people away from truthful information which would normally cause criticism or a serious backlash against the controlling party.
💢 Stigmatized truth also greatly inhibits independent research into sensitive areas,(usually involving criminal acts by the controlling entity)
💢Serves to manipulate social dynamics in a manner in which it becomes taboo to publicly discuss sensitive (albeit critically important) subjects.

In other words… we are the victims of a massive psy-op. But of course most of you knew that.

Let me give just three observations of controlled opposition IMHO I personally noticed….

1) MSM was the first to release the information about the arrest of Jeffrey Epstein and all the other drama following. (Trying to control the narrative).

2) MSM reported on the proverbial “leaked” name of the top Saudi Official responsible for 9/11 that AG Barr placed under seal. MSM only gave a name who was a low member on the totem pole. (If you listen to the attorney for the victims and family members Jim Kreindler… he tells us there are 11 of them). That name certainly wasn’t a top Saudi Official.

3) GTMO ~~~ Sensationalized Fake News Stories Reporting American Citizens being Detained, Tried, and Executed on GTMO. (Don’t get me started how this goes against our U.S. Constitution… and is NOT the purpose of GTMO.). Purpose? Hint… it has been over 20 years since the Sept. 11, 2001 Terror Attacks and KSM et al 9/11 proceedings are still in PRE-TRIAL.

Can you think of others?

Here is a bonus hint… FOX NEWS. They save them as a patriot favorite for when they REALLY need to control the narrative. Do you remember when that happened?

Is the “Controlled Opposition” running out of options?

This is when we all need to be hyper-alert of our surroundings. They have other games in their bag of tricks. Remember they are MASTERS of FUBAR… and the target is your mind.