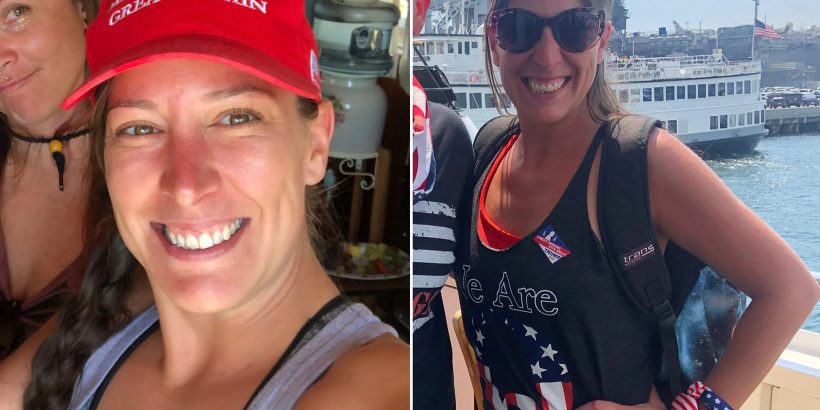 Ashli Babbitt, who was fatally shot by a police officer at the U.S. Capitol on Jan. 6, 2021, desperately tried to prevent rioters from vandalizing the doors leading to the Speaker’s Lobby at the Capitol that day, even stepping between one troublemaker and officers guarding the doors, a video footage analysis shows.

Frame-by-frame video evidence analyzed by The Epoch Times paints a vastly different picture of Babbitt’s actions than that portrayed in media accounts over the past year. News media regularly painted Babbitt as “violent,” a “rioter,” or an “insurrectionist” who was angrily trying to breach the Speaker’s Lobby.

Video clips appear to show she tried to prevent the attack, not join it.

Video footage shot by John Sullivan, also known as Jayden X, shows that Babbitt tried to stop the violence against the Speaker’s Lobby at least four times before she climbed into a broken window and was fatally shot by U.S. Capitol Police Lt. Michael Byrd. At one point, she was so distressed at the violence, she jumped up and down in frustration.

“The reality of it is, Ashli wasn’t a violent person. She was a good person, but they’ve demonized her to become this domestic terrorist that she never has been,” Tayler Hansen, an independent journalist who was feet away from Babbitt when she was shot, told The Epoch Times.

“She served her country for 14 years. That’s just insane to me that they can actually get away with pushing this narrative,” Hansen said. “They’ve done that by suppressing first-hand witnesses like me.”

Hansen said he was walking behind Babbitt in a hallway on the second floor of the Capitol at about 2:40 p.m. She turned right down the Speaker’s Lobby hallway. Hansen followed.

“We didn’t know anything about the building we were in. She turned the corner and I just followed her,” Hansen said. “A big group of people followed us after I followed her. People just kind of emerged on the door. By that time, she was stuck in the corner.

“She was literally trapped there,” Hansen said.

Babbitt, who served in the U.S. Air Force as a military police officer, was chatting with three officers from the the U.S. Capitol Police and the Metropolitan Police Department of the District of Columbia (MPDC).

“About five minutes prior to her getting shot and killed, all of those officers, Officer Yetter and the other officers in the hall, the MPD cops, they were all joking with her and laughing with her,” Hansen said. “They were having conversations and joking and laughing. Then not even five minutes later, Michael Byrd comes and executes her.”

Babbitt confronted rioter Zachary Alam, leaning in between him and one of the police officers guarding the doors. Alam turned away from Babbitt and punched a window to the side of the officer’s head. Babbitt winces just before Alam strikes the window with his right hand. He later uses a helmet to smash the tempered glass.

An audio analysis of video footage taken in the hallway reveals that Babbitt shouted, “Stop! No! Don’t! Wait!” according to her husband, Aaron Babbitt.

“After repeatedly forcing myself to watch the murder of my wife, I have come to my own conclusion that Ashli came to a point of realization that she was in very bad situation and the police weren’t acting appropriately to what she was witnessing,” Aaron Babbitt told The Epoch Times.

“I know my wife very well. She’s not destructive,” Babbitt said. “She was not there to hurt anybody.”

As the three police officers moved away from the Speaker’s Lobby doors, a U.S. Capitol Police Containment Emergency Response Team (CERT) was coming up the stairs, responding to an erroneous police radio report of shots fired.

Standing adjacent to the departing officers, Babbitt peers around them at the men smashing the glass. Her expression is one of shock. She yells at the two rioters.

In Fear for Her Life

Babbitt feared for her life, her husband said, so she climbed into the broken window to escape. Byrd shot her before she got more than partway into the window frame.

“The only way we’d ever know why Ashli felt the window was the only way out is if she had been detained by one of the countless police officers that abandoned their post in front of those doors,” Babbitt said. “That did not happen. She was murdered and robbed of the chance to tell her side of the story.”

Hansen and Sullivan said they didn’t hear any warnings from inside the Speaker’s Lobby before the shot was fired. The protesters were extremely loud. There were conflicting accounts from police officers on both sides of the barricaded door as to whether warning instructions were given before Byrd fired on Babbitt.

Sullivan was the first to notice Byrd’s service pistol aimed at the window. He and Hansen both shouted warnings.

“I began yelling: ‘Hey, there’s a gun! He’s got a gun!” Hansen said. “But nobody could hear us. I could barely hear John Sullivan and I was right next to him, because people were screaming and windows were breaking.”

“Since there was a gun, I got on the ground because I didn’t know what was going on,” Hansen said. “I figured I’m going to get as low as possible in case there’s any ricochets or any misfires or anything like that. I had my Kevlar vest on, which I always wear when I report.

“We tried to warn people and they couldn’t hear us—and we were screaming.”

Alam broke out the side window to the right of the double doors because he intended to use it to breach the Speaker’s Lobby, Hansen said. The only reason he didn’t climb through before Babbitt, Hansen said, was because his glasses got knocked down on his face and he stopped to readjust them.

“He was about to go through that window,” Hansen said. “It was his idea. He was the one shattering it.”

Babbitt said the situation shows how two people can look at the same video and reach completely different conclusions.

“It all comes down to which mental angle a person views it from. If they hate Ashli because they believe the lies, that’s all they see: her being part of a mob,” Aaron Babbitt said. “Us who love her, know her, know every action and emotion she was displaying—she realized a minute before her death she was not in a friendly situation and something very wrong was occurring.”

US Cleared Byrd Without Interviewing Him

The U.S. Department of Justice cleared Byrd of criminal culpability in the shooting death without ever questioning him or taking a statement that explains his actions that day, according to investigative records and the Babbitt family attorney.

Byrd shot Babbitt at 2:44 p.m. as she tried to climb through the broken window. She wasn’t armed.

Byrd met with investigators from the Internal Affairs Division of the MPDC five hours after the shooting. The MPDC investigates officer shootings involving U.S. Capitol Police.

“He did not give a statement to the Internal Affairs Division of the Metropolitan Police Department, which was charged with conducting the investigation after the shooting, and which the U.S. Attorney relied upon to reach his decision not to charge,” Terry Roberts, a Washington D.C. attorney who represents the Babbitt family, told The Epoch Times.

“The lead investigator brought Byrd in to question him and Byrd declined,” Roberts said. “He wanted a lawyer present. That means the investigator’s not going to talk to him at that point. It could mean that later, the investigator could approach Byrd and say, ‘Let’s get your lawyer down here and let’s ask you questions.’ That never happened.”

A U.S. Capitol Police sergeant who was posted at the double doors to the Speaker’s Lobby just before the shooting told an internal affairs investigator he left his post out of fear for his safety. He moved aside “due to the rioters surging towards them” and then “made a decision to leave the area and began to move towards the east stairwell,” a Metropolitan Police Department report stated.

“If we didn’t have that stairwell down there, I thought they were going to kill us,” the sergeant said. If the stairwell had not offered them an escape route, “we would have been forced” to use deadly force, he said.

A member of the CERT who arrived in the area as Babbitt was shot “reported that he did not recall hearing any type of verbal commands being given prior to Ms. Babbitt being shot, nor did he see who shot Ms. Babbitt,” a February 2021 internal affairs report stated.

A U.S. Capitol Police sergeant who entered the Speaker’s Lobby just before the shooting said he saw Byrd and an officer “had taken up positions and had their guns out,” an internal affairs report stated.

Shortly after the glass panel to the side of the double doors leading into the Speaker’s Lobby was smashed out, Babbitt was seen attempting to climb through the opening where the pane of glass had been.

“There was a lot of screaming and Sergeant [redacted] heard someone yelling, ‘Get back! Get back!’ the report stated. The sergeant was posted “furthest away from this barricaded door.”

The sergeant wasn’t aware whose weapon discharged until he spoke with Byrd, who stated, “I was the one who took the shot,” the report stated.

According to a transcript of the interview, the sergeant said he noticed Byrd make a backward motion after firing. “He stepped back and I don’t know if that was from him taking the shot and realizing that he shot somebody and he was like, ‘Oh my God. You know, I actually did what I did.’”

A U.S. Capitol Police officer who was also in the Speaker’s Lobby said he heard Byrd and others tell the crowd, ‘Stay back,’ before Babbitt came through the window. “He then observed Ms. McEntee (Babbitt) climbing through the window and the shot was fired, she fell back,” an internal affairs report stated.

Byrd met with an internal affairs agent from the MPDC at 7:38 p.m. on Jan. 6, 2021. After providing the agent with information on his duty assignment in the House Chamber that day and his last qualification on a firing range, Byrd was given a Garrity warning advising him of his rights.

“Lieutenant Byrd declined to provide a statement until he can consult an attorney,” the agent wrote in his report.

On April 14, 2021, Acting U.S. Attorney Channing Phillips notified the MPDC that no charges would be brought against Byrd.

“We have declined criminal prosecution of the above officer as a result of this incident,” Phillips wrote in a three-sentence memo to Assistant Chief Wilfredo Manlapaz. No explanation was provided.

Roberts said the shooting wasn’t justified. He is preparing a lawsuit.