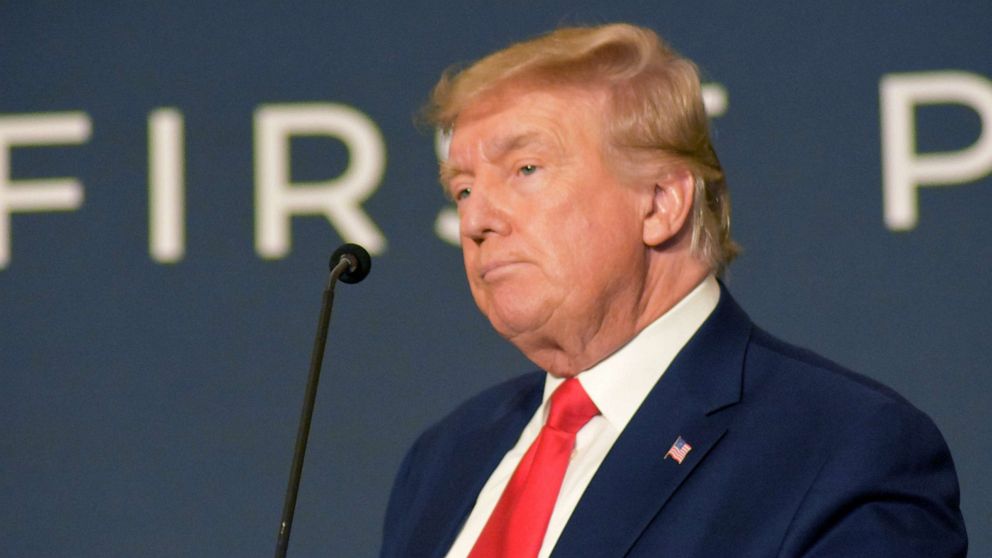 Gas lighters in the media and in Washington D.C. continue to tell the few who still listen to their words that former President Donald Trump is irrelevant.

In a Sunday news/snooze fest interview he told ABC’s This Week, “I am hearing a lot of anecdotal stuff, around the edges, of people who’ve been hardcore with Trump who now just can’t stand him.”

I suspect he is hearing his “anecdotal stuff” from his January 6 co-NeverTrumper Rep. Liz Cheney or other former conservatives in Washington, D.C., grasping for relevance, such as Bill Kristol, Max Boot, Jennifer Rubin, or George Will.

Outside of D.C., the GOP elites have the same attitude.

As reported by the Trump- and Republican-hating New Yorker, Georgia Gov. Brian Kemp also believes Trump to be irrelevant: “Every speech that the governor of Georgia gives is intended as a little shove, to push the former president a little more emphatically into the past.”

A photo appears in the article of Kemp and former New Jersey Gov. Chris Christie, which says it all.

Remember how failed presidential candidate Christie was photographed sunbathing his svelte physique on a Jersey Shore beach that he closed to the hoi polloi, but not to his family?

And he thinks Trump is irrelevant, calling for a “smaller Trump presence”?

A good measure of Trump’s continued political relevancy is the value of his endorsements. Last week’s primary elections, Trump endorsed candidates made a clean sweep in Arizona, despite efforts and delays aimed at denying the GOP gubernatorial primary victory to Kari Lake.

Candidates backed by former President Donald J. Trump are now 172-10 in statewide and federal races in 2022 after a perfect night in Kansas, Michigan, and Missouri. His candidates are undefeated so far in Arizona – but results are still pending in the gubernatorial race – while he also has two candidates in Washington whose races are still awaiting results.

Subsequently, Arizona became a clean sweep. Washington state is still too close to call. What irony it is that virtually every country in the world, far more populous than Washington or Arizona, can hold an election and know the results hours after the polls close, whereas these states need days or weeks to count (or manufacture) votes. No wonder only half of Americans believe our elections are fair.

Don’t forget J.D. Vance and Dr. Oz, both jumping in the polls and winning their U.S. Senate primaries after receiving a coveted Trump endorsement.

Aside from endorsement success, Trump is currently the most popular politician in America.

According to the latest polling from Harvard Caps Harris Poll, despite seven years and billions of corporate dollars spent to destroy him, despite two fake impeachments and this Kangaroo January 6th Committee, Trump’s favorable rating is higher than any other politician in America—including politicians the fake media have spent billions of dollars propping up—like Rep. Alexandria Ocasio-Cortez (D-Fascist).

CNN, in a rare moment of journalistic honesty and integrity, reported: “Donald Trump has become more popular since the January 6 Capitol attack.” How could this be? CNN notes,

A majority of Americans (55%) now believe that Trump was either not or only partially responsible for the rioters who overtook the Capitol, according to a recent NBC News poll. That’s up from 47% in January 2021.

Today, Trump’s polling position with Americans overall is one of his best, and he remains the front-runner for the 2024 Republican nomination.

In raw numbers, Trump’s been ahead in more polls against Biden over the past few months than he was for the entirety of 2020.

Trump also handily won last weekend’s CPAC straw poll, beating his closest rival, Florida’s governor, Ron DeSantis, by almost a three to one margin with the rest of the GOP contenders at this point in the very low single digits.

Everything the left has thrown at Trump since his 2015 escalator ride at Trump Tower has either not stuck or backfired, bigly. Two nonsensical impeachment efforts, failing to remove Trump from office, are prime examples. So is the January 6 insurrection fiction, whose sole purpose is to indict and prevent Trump from running for president in 2024.

If Trump is an irrelevant buffoon as his opponents on both sides of the political aisle claim, why are they so worried about him?

I don’t see similar worry from the GOP over “holy spirit” Trump-slayer Michael Avenatti, being pardoned by Biden and released from his long prison sentence to run against Trump. Yet Democrats are obviously worried about and afraid of Trump running again.

Democrats are so worried that in their spite for Donald Trump, they now love the Cheney family, specifically Dick and Liz. Once upon a time, Dick Cheney was Darth Vader. Now the left is gushing over the Cheney’s as they did jailbird Michael Avenatti.

Liz is the supposed leading voice of reason and fairness on the January 6 committee, hoping to see Trump behind bars. Father Dick, who famously led the “Saddam has WMDs” fable, getting America into a needless and expensive war in Iraq, now calls Donald Trump “a coward.”

Cheney went on, “In our nation’s 246-year history, there has never been an individual who is a greater threat to our republic than Donald Trump.” Trump is an ex-president. He holds no political office and is as relevant as Barack Obama, George W. Bush, or Bill Clinton in running the nation.

As to the “coward” label, Cheney managed to avoid serving in the Viet Nam war, telling the Washington Post, “I had other priorities in the ‘60s than military service.” Irony knows no bounds with the Cheney family.

Suddenly, “the enemy of my enemy is my friend” Dick Cheney is the darling of Morning Joe and his gaggle of Trump haters. On a recent MSNBC panel, their dour faces speak volumes about the state of the Democrat party and prospects in November 2022 and 2024.

If no one likes Trump and he is such a reprobate, why are they so worried and why do his endorsed candidates keep winning? As usual the media is gas lighting the nation, but the voters are no longer falling for it.

Trump’s “Great Red Wave” strategy is working. The America First-MAGA coalition is large and motivated, enough of an electoral tsunami to overwhelm the ruling class elites of both parties, the uniparty that views Trump and his supporters as an existential threat to their wealth and power. Perhaps this is “The Storm” that Trump once cryptically referred to. Fasten your seatbelts for a wild ride.

Brian C Joondeph, MD, is a physician and writer.