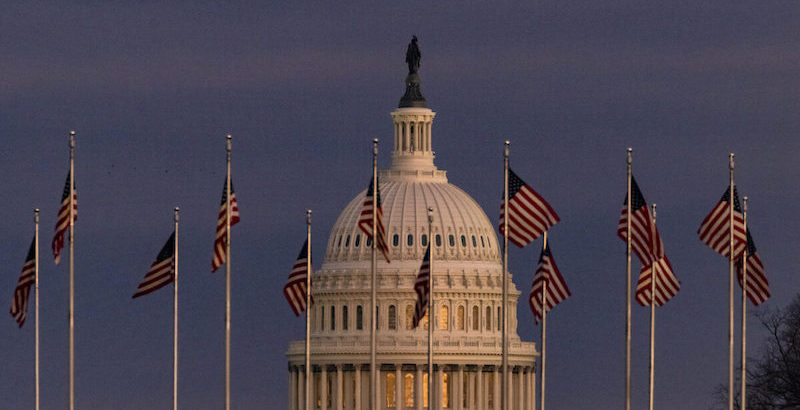 According to the U.S. Constitution, House and Senate lawmakers  can legally challenge the votes of the Electoral College. This can take place on January 6, 2021.

One member of each chamber must object in order for a hearing to take place. If this occurs, a two-hour session is then called to listen to the objection for that state.

The Trump Campaign Team says with certainty they have mounting evidence of voter and election fraud from the 2020 election.  Many Patriots want to see the evidence so they can make up their own minds.

On January 6th, if presented, Congress will have no choice but to look at and discuss the irregularities. We-The-People will be holding their feet to the fire in support of a fair and lawful election.

President Donald Trump’s campaign adviser said the team is aiming to present evidence during a potential congressional debate on Jan. 6 if lawmakers in the House and Senate object to states’ Electoral College votes.

As of Wednesday, it appears that at least one member of the Senate, Sen. Josh Hawley (R-Mo.), and a number of House lawmakers will object to the electoral votes during the Joint Session of Congress. Hawley announced he would object to the electoral vote, pointing to previous Democratic efforts to do so during the 2004 and 2016 presidential elections. After the objection, an hours-long debate will occur.

Miller said that evidence could be presented in Congress, which would differ from what the Trump campaign presented in courts over the past several weeks.

“We will have a chance in front of the American people, next week to present these cases, all these evidences of fraud,” Miller told Newsmax, pointing to a lawsuit filed by Rep. Louie Gohmert (R-Texas) against Vice President Mike Pence earlier this week to prevent him from confirming Joe Biden’s electoral victory. Miller told the outlet that the 1887 Electoral Count Act allows the vice president, who is the president of the Senate, to preside over the Joint Session of Congress.

Then, Miller told Newsmax that he hopes at least one senator and representative join together to object to the Electoral College vote, allowing for two hours of debate.

Should that happen, Miller said President Donald Trump’s team is seeking to present alleged evidence of voter fraud or irregularities in the Nov. 3 election, including law changes regarding mail-in ballots in Wisconsin, “suitcases of ballots” in Georgia being wheeled out late at night on Nov. 3 in Atlanta’s State Farm Center, and being blocked in Arizona and Michigan from inspecting voting systems, alleging that ballots were counted several times.

“These are the specific types of evidence we want to present to the American people on the national stage and not allow local politicians to sweep it under the rug,” Miller said.

Weeks ago, Trump’s team led by Rudy Giuliani presented a surveillance video from the State Farm Center that showed suitcase-like boxes being wheeled from under a table. It came after election officials allegedly told other workers and poll observers that counting was done for the night.

The Georgia GOP said they received conflicting and incorrect answers and statements from Fulton County officials about what happened on Election Night, and officials later acknowledged that vote-counting went on until the early-morning hours. State election officials, in response to the video, said nothing unusual occurred with the ballot boxes and vote-tabulation process in Fulton County.

Elaborating on Wisconsin, he said, “Article II of the Constitution makes it very clear, the state legislatures, and state legislatures alone, set up the voting systems for each state, the codes and the way they are conducted.” He said, “And what we have here is we have over 20,000 ballots that were cast without actually having an application on file, the mail ballots. Wisconsin’s very clear, very specific you got to have an application on file.”