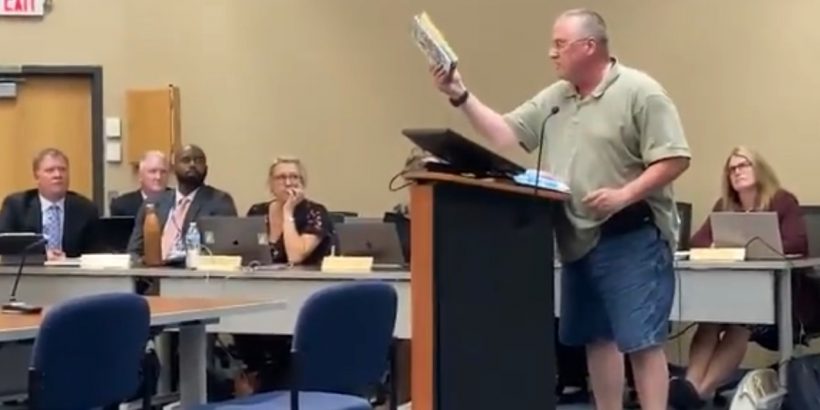 Our American education has been derailed.  How do we get it back on track?

There’s a new boldness in town, as concerned and fed-up parents are confronting local school board officials over “Critical Race Theory”, forced mask wearing, and other anti-American sentiment displayed by these same officials.

Holding nothing back, parents in Rochester, Minnesota, verbally pummeled their local school board with a rare boldness – a refreshing change, as “Minnesota Nice” took on a new definition of “Truth and Freedom over Niceties”.

Banging gavels didn’t deter these parents as they dropped truth bombs from the podium. It appears even The Lord’s Prayer was too intimidating for this school board. With a flip of a finger, microphones were silenced, as they turned a collective deaf ear to the recited prayer of the centuries.

Parent involvement is spreading like wildfire to other local school communities, as parents hold school officials’ feet to the fire, demanding accountability, and with full intention of returning their local schools to solid American principles and standards of education.

Now is the time. It’s the only way back.

Be sure to click on the video links below ↓ – they are priceless!

A group of parents, students, and community members attended the school board meeting for Rochester Public Schools on July 13 to raise concerns over the mandatory mask policy and critical race theory.

The meeting drew over 50 people and was standing-room only. A handful of people brought signs to the meeting as well. Before the formal meeting during the public comment time allotment, a number of community members addressed the school board.

“I look across our community, across this room, and I see a tremendous polarization,” said one attendee, Wes Lund, according to the Rochester Post Bulletin. He added that “students and teachers, parents and community members are afraid to voice their true opinions in our schools for fear of docked grades, threats to job security, and retaliation against their students and businesses.”

“A singular, social, political narrative is being pushed and anyone who dares to question it or speak against it is being attacked and demonized,” added Lund, who was carrying a handful of Dr. Seuss books.

When Board Chair Jean Marvin welcomed everyone to the meeting, an audience member asked if they could start with the pledge.

Another concerned parent spoke out against mandatory masking, but was interrupted by Marvin, apparently because the parent came forward after the public comment portion had ended.

The school board was scheduled to discuss new CDC guidance that requires unvaccinated children to continue wearing masks.

The group began to recite the Lord’s Prayer at the meeting after the public comment time allotment concluded, which Rochester Public Schools muted on its livestream.

“We benefited from hearing those concerns,” Superintendent Kent Pekel said in an interview after the meeting, claiming that the school district does not teach critical race theory.

Just last month, a Minnesota non-profit said it plans to sue Rochester Public Schools for deciding that “Black Lives Matter” and other phrases were considered “government speech,” meaning the district does not have to create space for dissenting opinions.

The wave of community members speaking up at school board meetings has also extended to school districts in Sartell, Otsego, Elk River, and Apple Valley-Rosemount-Eagan.