Zakir, then known as Abdullah Ghulam Rasoul, was captured on the battlefield and sent to the American detention camp at Guantánamo Bay until December 2007, when he was deported to Afghanistan.

The Released Prisoners of Guantanamo Bay, Promptly Returned to Terrorism. But There are Still Those Who Advocate for the Release of the Remaining 39…

As Recently as July 19, 2021 ~ Julia Conley Reported the following about GTMO:

“Bringing an end to two decades of unjust and abusive military detention of Muslim men at Guantánamo is a human rights obligation and a national security necessity,” said the ACLU. 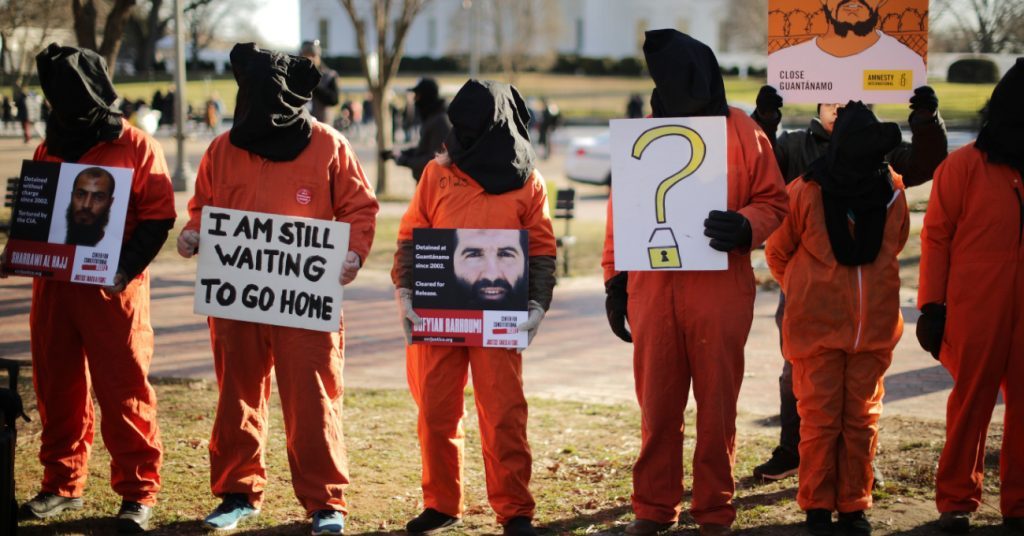 Demonstrators wearing orange jumpsuits and hoods over their heads, rally to demand closure of the detention camp at the U.S. Naval Station in Guantanamo Bay, Cuba, outside the White House on January 11, 2019. ‬ (Photo by Chip Somodevilla/Getty Images)
You may read the entire report here:
https://www.commondreams.org/news/2021/07/19/39-men-still-remain-after-prisoner-released-biden-urged-close-gitmo-completely
The hard lesson learned here is that over 700 GTMO Prisoners were released under the Obama Administration and now many of those released are back at the terrorist activity.
Obama worked very hard to close Guantanamo Bay, but did not succeed.  Former President Trump mandated GTMO was to stay open and also opened up the Pre-trials to the public in 2019. The Biden Administration has since again taken up the mantle to close GTMO for humanitarian reasons. Continue reading the following New York Post report where things stand as of today….
~~~ Linda Forsythe

Twenty years after the 9/11 attacks, U.S. intelligence documents reveal 229 “rehabbed” former Gitmo detainees have returned to terrorism and killing Americans — and an alarming 66% of them have not been recaptured and are still at large.

Meanwhile, President Biden is quietly freeing more of these terrorist suspects from the Guantanamo Bay prison, all to fulfill his old boss’ pledge to permanently close the facility in Cuba.

Shortly after taking office, Biden reversed President Trump’s executive order to keep Gitmo open and is lining up inmates to transfer out of the prison with the goal of emptying it and shuttering it — even though the remaining prisoners have long been classified by military intelligence as the worst of the worst and too dangerous to release.

Last month, the president freed his first prisoner — accused terrorist Abdul Latif Nasser — leaving the number of remaining detainees at 39. Ten others have been cleared for release, including some of Osama bin Laden’s bodyguards and 9/11 mastermind Khalid Sheikh Mohammed’s safehouse operator, according to Gitmo parole board documents.

Still other detainees have appealed to the Biden administration through their pro-bono defense lawyers to ensure their release, despite the risk of them returning to militant activities. The suspected 20th hijacker, Mohammad al-Qahtani, and a dozen other inmates are slated for parole hearings this year, documents reveal.

Biden is clearing out the cells despite being fully briefed by his intelligence agencies that one in three released detainees have gone back to fighting against America — and some have actually managed to kill more Americans.

“Based on trends identified during the past 17 years, we assess that some detainees currently at GTMO will seek to reengage in terrorist or insurgent activities after they are transferred,” a recent US intelligence report warned.

According to the December 2020 declassified report by the Office of National Intelligence, a total of 229 of the 729 detainees released from Gitmo have reengaged in terrorist activities, including conducting and planning attacks and recruiting and funding terrorists. That’s a recidivism rate of 31%. (The share would be even higher if US intelligence included engagement in anti-US statements or propaganda in its definition of “terrorist activities.”)

Some of the repeat offenders have since died or been recaptured, but 151 — or 66% —  are still at large, the document reveals.

And some have American blood on their hands. At least 12 released detainees have launched attacks on US forces in Afghanistan and killed about a half-dozen American soldiers and civilians. The exact figure remains classified.

In fact, most of the former detainees found reengaging in terrorist activities are Afghans, which raises security alarms given the Taliban’s sacking of the US-backed government in Kabul and the flood of largely unvetted Afghan refugees being resettled in US cities. More than 200 Afghan prisoners have been repatriated from Gitmo.

One notorious Gitmo recidivist, Abdullah Gulam Rasoul, became the Taliban’s operations commander in southern Afghanistan soon after his 2007 release from the prison. He was blamed for masterminding a surge in roadside attacks against American troops and organizing assaults on US aircraft in Afghanistan.

The Taliban has relied on former detainees to fill other key leadership roles as well, including the “Taliban Five” who were released by President Obama in 2014 over Pentagon objections and are now top dogs in the revamped enemy group. As the Post first reported Monday, at least one of the freed Taliban commanders engaged in talks with Biden diplomats to secure the precipitous withdrawal of US troops from Afghanistan. In addition, Mullah Zakir was sent from Gitmo to Afghanistan in 2007, where he became one of the Taliban’s top military chiefs.

Counterterrorism experts warn that now that the Taliban has seized control of Afghanistan in the wake of Biden’s widely criticized pullout of US forces, more Gitmo alumni could take up with the Taliban and other terrorist groups in the country.

One of the Taliban honchos who last Sunday captured the presidential palace in Kabul with armed fighters boasted in a victory speech that he spent several years at Gitmo. The former detainee, Gholam Ruhani, was captured by US forces after 9/11 and incarcerated at the detention center in Cuba. He was transferred back to Afghanistan six years later, pleading he needed to return home to help his sick father run their family shop.

Such pitiful stories are common in detainee pleadings before the Gitmo parole board, which has tended to sympathize with the tales, especially during the Obama administration. At least five different inmates released during the Obama years told the same sob story to the review board about wishing only to see their “ailing mother” before she passed away. Their attorneys have successfully argued that their formerly violent clients had been rehabilitated through “baking” and “yoga classes.”

Both Biden and Obama have justified paroling these America-hating jihadists by preconditioning their release on assurances from the Muslim countries taking custody of them that they will continue to rehab them. But reform efforts often fall short.

The report added, “Former GTMO detainees routinely communicate with each other, families of other former detainees, and members of terrorist organizations.”

Republicans and counterterrorism experts say the high Gitmo recidivism rate is further evidence that Biden’s plans for closing the prison are dangerously misguided. Clearing out the prison would require resettling many of the terrorist suspects overseas in countries that have a poor track record of rehabilitating them and controlling them to ensure they don’t return to violent jihad. And many of the remaining prisoners are from Yemen, which is too unstable to take custody of them. So those dangerous detainees would have to be moved to US prisons, which don’t have the same level of security as Gitmo.

Then there are the 14 high-value detainees such as suspected 9/11 architect Khalid Sheikh Mohammed who are held at Camp 7, a classified facility at Gitmo. He and four other men are on trial for organizing the 9/11 attacks. If they were transferred here from the military prison, they’d have to be tried in US criminal courts and afforded all the accompanying rights given US citizens, potentially turning their trials into circuses.