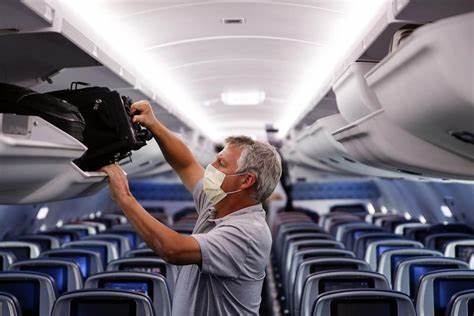 Former Food and Drug Administration (FDA) chief and current Pfizer board member Dr. Scott Gottlieb is predicting that the federal mask mandate for airlines and other public transportation will be lifted in April if there is no surge in COVID-19 cases.

Gottlieb, who led the FDA between 2017 and 2019, said he believes the Biden administration’s mask mandate for mass transit will be allowed to expire on April 18.

“My view was that they should lift that requirement on airlines,” he said.

The mandate should be lifted if the BA.2 Omicron subvariant of COVID-19 isn’t surging across the United States, he continued. COVID-19 is caused by the CCP (Chinese Communist Party) virus.

But should infections rise in April, it’s likely that the mandate won’t be lifted, the Trump-era FDA chief said.

“If we’re actually seeing a wave of infection—we’re unclear how large it’s going to be—I think it’s very hard to lift it in that kind of a backdrop, so you’d probably extend it a month,” Gottlieb said.

Major airline CEOs recently called on President Joe Biden to drop the mask mandate for airports and planes, according to an open letter that was issued earlier in March.

“Now is the time for the Administration to sunset federal transportation travel restrictions,” the letter reads.

It was signed by chief executives from American Airlines, Delta Air Lines, United Airlines, and several others.

“It is critical to recognize that the burden of enforcing both the mask and predeparture testing requirements has fallen on our employees for two years now,” the letter continues. “This is not a function they are trained to perform and subjects them to daily challenges by frustrated customers. This in turn takes a toll on their own well-being.”

In adding more pressure on the White House, nine flight attendants recently filed a lawsuit against the Centers for Disease Control and Prevention and the Department of Health and Human Services in a bid to block the mask mandate.

The nine plaintiffs—who work for Allegiant Air, American Airlines, Delta Air Lines, Frontier Airlines, Southwest Airlines, and United Airlines—wrote that the mandates cause “chaos in the sky” and made note of “thousands of reports” sent to the Federal Aviation Administration for “‘unruly’ passenger behavior” over about the past year.