VIDEO:  Provided for your viewing convenience by C-Vine Network News 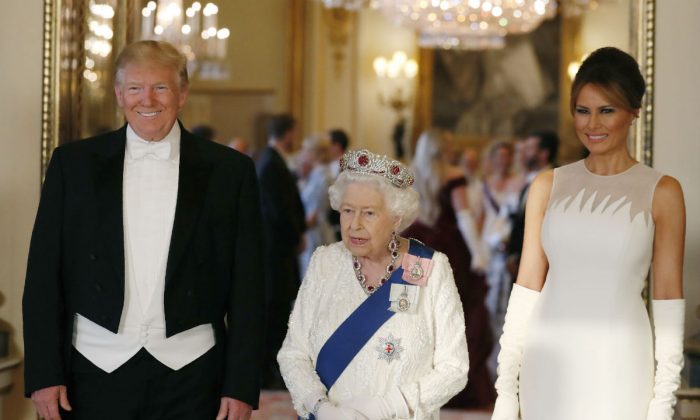 Queen Elizabeth II (C),U.S. President Donald Trump (L) and First Lady Melania Trump (R) attend a State Banquet at Buckingham Palace on June 3, 2019 in London, England. President Trump’s three-day state visit will include lunch with the Queen, and a State Banquet at Buckingham Palace, as well as business meetings with the Prime Minister and the Duke of York, before travelling to Portsmouth to mark the 75th anniversary of the D-Day landings. (Jeff Gilbert – WPA Pool/Getty Images)

President Donald Trump exchanged formal toasts with Queen Elizabeth II during an elaborate State Banquet at Buckingham Palace on June 3, ending the first day of his state visit to the UK.

Trump is spending three days in the UK during his week-long European trip, which is both ceremonial and official. The centerpiece of the president’s visit will be two days to mark the 75th anniversary of D-Day on June 6, likely the last significant commemoration most veterans of the 1944 battle will see.

Apart from visiting the queen and attending D-Day commemoration ceremonies on both sides of the English Channel, he will also make his first presidential visit to Ireland.

With around 170 guests, the state banquet began with Queen Elizabeth’s remarks, where she said, “visits by American presidents always remind us of the close and longstanding friendship between the United Kingdom and the United States.”

“I am so glad that we have another opportunity to demonstrate the immense importance that both our countries attach to our relationship,” she said.

“Tonight, we celebrate an alliance that has helped to ensure the safety and prosperity of both our peoples for decades, and which I believe will endure for many years to come.”

Returning the toast, President Trump also highlighted the close friendship between the UK and the United States, and reaffirmed their alliance.

“This evening, we thank God for the brave sons of the United Kingdom and the United States who defeated the Nazis and the Nazi regime, and liberated millions from tyranny,” Trump said.

“The bond between our nations was forever sealed in that ‘Great Crusade.’ As we honor our shared victory and heritage, we affirm the common values that will unite us long into the future: freedom, sovereignty, self-determination, the rule of law, and reverence for the rights given to us by Almighty God,” he added.

The dinner was held in honor of Trump and First Lady Melania Trump. Along with the queen, members of the royal family, the British government, Trump’s four children, and members of the Trump administration were also in attendance on Monday evening.

Earlier in the day, Trump and the first lady were warmly welcomed by the British monarch and Prince Charles after arriving in the UK. The Trumps then had a private lunch with the queen, where they were afforded the opportunity to view the royal collection.

The Trumps then paid their respects at the grave of an unknown British warrior who is buried at Westminster Abbey, before having afternoon tea with Prince Charles and his wife, Camilla, the Duchess of Cambridge.

Before the state dinner, Trump gave an update on Twitter:

“London part of trip is going really well. The Queen and the entire Royal family have been fantastic. The relationship with the United Kingdom is very strong. Tremendous crowds of well wishers and people that love our Country. Haven’t seen any protests yet, but I’m sure the Fake News will be working hard to find them. Great love all around. Also, big Trade Deal is possible once U.K. gets rid of the shackles. Already starting to talk!”

The second day of Trump’s trip will focus on politics, including a breakfast with business leaders, talks with outgoing Prime Minister Theresa May at 10 Downing Street, a news conference, and a dinner at the U.S. ambassador’s residence.