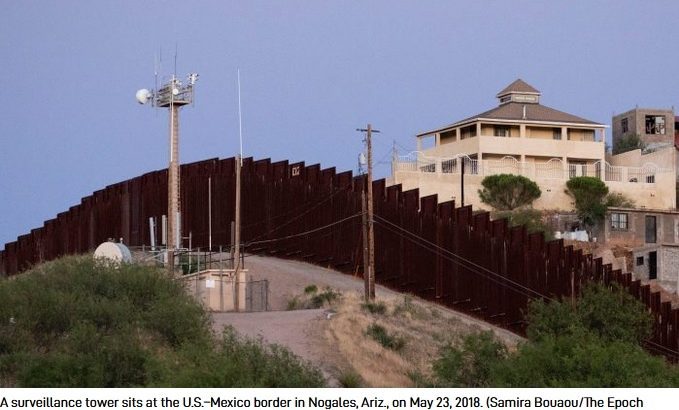 Drones, towers, license plate readers, and other surveillance tools comprise a “digital border wall” that threatens privacy and civil liberties, according to a new report from three immigration advocacy groups.

The Deadly Digital Border Wall report criticizes law enforcement’s surveillance of the U.S.-Mexico border, but the tools described in the report could be—and have been—used against all American residents as the government ramps up programs to counter domestic extremism.

The report—published by Mijente, Just Futures Law, and the Rio Grande Valley No Border Wall Coalition—details two main tools law enforcement uses to track migrations: drones and towers. Additionally, the government uses a wide array of surveillance systems and databases to track all people who cross U.S. borders—illegally or otherwise.

According to the report, there are at least 55 surveillance towers along with Southwest border. These structures are 80 to 140 feet tall and are equipped with day and night cameras and a radar that can identify people six miles away, the report said.

There are also more than 360 remote video surveillance systems—smaller, relocatable surveillance towers—and dozens of mobile surveillance systems. Each mobile system consists of a truck with telescoping poles in the bed that extend up to 35 feet in the air, outfitted with thermal and video cameras and a laser illuminator, the report explained.

Meanwhile, the government is rolling out its newest surveillance tool: an autonomous tower powered by artificial intelligence, which can be used without the direct control of a human operator, the report said.

“The relocatable towers are 33 feet tall and suited to work in remote environments with little maintenance, since they operate off the grid and around the clock, using solar panels for energy,” the report said, adding that Customs and Border Protection (CBP) plans on installing 200 of them by fiscal year 2022.

The growing number of towers is complemented by a fleet of drones along the border in the Southwest. The report said CBP has more than 135 drones, with plans to procure another 460.

“Nearly 600 operators were trained to fly them, and the agency aimed to double that number in 2021 with a training program in West Virginia,” the report said, adding, “Since 2016, CBP has expressed interest in developing drones with facial recognition capabilities.”

For instance, the report raised concerns about the forthcoming Homeland Advanced Recognition Technology System (HART), which the Department of Homeland Security is implementing to replace a legacy system.

“The planned database will collect this invasive personal data from diverse federal agencies like ICE, CBP, FBI, and the Department of Defense, as well as from local and state law enforcement, and from foreign governments including Mexico, the Northern Triangle countries of Central America, and the Five Eyes alliance.”

Another surveillance tool that has come under scrutiny is the automated license plate reader, which tracks plate numbers, precise dates and times, images, geolocation information, and other data.

“This data can be used to determine the travel patterns of individual drivers,” the report said. “Most importantly, the plate data can be matched with a car’s owner to track their movement, and stored and shared among different law enforcement agencies.”

Along with documenting the methods and tools used by the government, the report also tracks the private contractors that have been profiting off the growing surveillance state.

The most expensive system in the report is the HART biometric database system at an estimated $4.3 billion. Military contractor Northrop Grumman has been awarded a $143 million contract to develop the first increment of this system, the report noted.

According to the report, government and big tech are becoming increasingly intertwined when it comes to border surveillance.

“As border enforcement agencies become increasingly reliant on technology to monitor, detain, and deport immigrants, multi-million-dollar contracts are being signed to develop tools for the region.”

Lest people think that these tools are solely being used to curtail illegal immigration, the report explained that entire populations are being swept up in the surveillance dragnet.

In 2017, for instance, CBP stationed a tower in San Diego to monitor a protest, according to the report. Last year, CBP drones were deployed on Black Lives Matter protestors in at least 12 cities, the report added.

“Border communities feel the impact of this surveillance acutely. The surveillance towers above their towns don’t just monitor the border, they monitor their backyards too. The drones flying overhead are an ever-present eye in the sky, watching people as they walk, bike, and drive in their neighborhoods,” the report said.

A recent lawsuit from the ACLU and Electronic Frontier Foundation further backs the report’s claims, at least when it comes to license plate readers. The lawsuit revealed that one law enforcement department shared such information with more than 600 other agencies.

The report warned that border surveillance is just a taste of what could come for the rest of the country.

“The proliferation of checkpoints is a constant reminder that the entire border region is, in the eyes of DHS, a war zone. Border communities have become a legitimate target for surveillance and enforcement—a taste of what may await the rest of the country as these technologies are rolled out nationwide.”