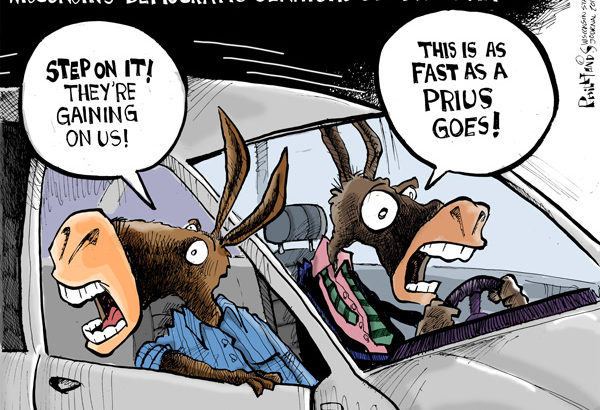 “Radical” is putting it lightly.

Kamala Harris, the politically shrewd California senator with a law enforcement background that has caused some tensions with the progressive left, was announced Tuesday as Joe Biden’s running mate.

“I’ve decided that Kamala Harris is the best person to help me take this fight to Donald Trump and Mike Pence and then to lead this nation starting in January 2021,” Biden said in an email to supporters.

She makes history as the first Black woman to serve as a major political party’s VP pick.

“I’m honored to join him as our party’s nominee for Vice President, and do what it takes to make him our Commander-in-Chief,” Harris tweeted.

The Biden campaign said Biden and Harris will deliver remarks together on Wednesday in Wilmington, Delaware.

Biden tweeted on Tuesday, “Back when Kamala was Attorney General, she worked closely with Beau. I watched as they took on the big banks, lifted up working people, and protected women and kids from abuse. I was proud then, and I’m proud now to have her as my partner in this campaign.”

The decision, following months of secret meetings and closely held deliberations, would indicate the former vice president is setting aside their friction from the primary campaign. Harris memorably drew sharp contrasts with Biden when she challenged him on the debate stage over his past resistance to federally mandated desegregation busing.

Signaling the campaign’s line of attack against Harris, President Trump responded by tweeting out an attack ad soon after the announcement that called her “phony Kamala Harris.”

The Trump campaign also released a statement from Katrina Pierson, a Trump 2020 senior adviser, that said: “In her failed attempt at running for president, Kamala Harris gleefully embraced the left’s radical manifesto, calling for trillions of dollars in new taxes and backing Bernie Sanders’ government takeover of health care. She is proof that Joe Biden is an empty shell being filled with the extreme agenda of the radicals on the left.”

The now-presumptive Democratic presidential nominee’s selection amounts to a vote of confidence in the senator’s political ability and her background, and a willingness to move past the bad blood. The decision may have been tipped days earlier, when he was photographed with talking points saying of Harris that he does “not hold grudges” and has “great respect for her.”

The choice also fulfills a commitment the former vice president made in March to name a woman as running mate. Naming a Black woman at a time when issues of racial inequality are front-and-center also responds to signals from some circles in the party that such a choice could help build bridges with the Black community.

The timing gives Biden space to re-introduce her to voters ahead of this month’s scaled-back Democratic National Convention.

“Joe Biden nailed this decision,” Obama said in a statement. “By choosing Senator Kamala Harris as America’s next vice president, he’s underscored his own judgment and character.”

Biden’s naming of 55-year-old Harris as his running mate comes 13 months after she flattened him on the debate stage in Miami at the first Democratic presidential primary showdown.

During the debate, Harris criticized comments by the former vice president spotlighting his ability to find common ground during the 1970s with segregationist senators with whom he disagreed, and his opposition decades ago to federally mandated school busing.

“Do you agree today that you were wrong to oppose busing in America?” Harris asked Biden during the debate.

And in a line that went viral, she spotlighted that “there was a little girl in California who was a part of the second class to integrate her public schools, and she was bused to school every day. And that little girl was me.”

Biden, who served eight years as vice president to Barack Obama, the first Black president in U.S. history, and who’s enjoyed strong support from African-American voters as he makes his third bid for president, angrily said the senator’s comments were “a mischaracterization” of his position.

Biden’s poll numbers briefly edged down after the debate – and Harris enjoyed a short-lived surge in the polls. But her campaign faltered later in the year, and Harris ended her White House bid last December.

By the time she suspended her campaign, the relationship between Harris and Biden had improved. Biden has publicly praised Harris numerous times – and has repeatedly pointed out that he’s thought highly of her since she became close to his late son, Beau Biden, when they both served as attorney general of their respective states.

Harris ended up endorsing Biden and appeared on stage with him – along with another former rival, Sen. Cory Booker of New Jersey – at a rally in Michigan on the eve of that state’s March 10 primary, which the former vice president ended up winning decisively as he moved closer to locking up the Democratic nomination.

The rally was Biden’s last before the coronavirus pandemic swept across the country, shutting down in-person campaigning. Since then, Harris has campaigned virtually for Biden, headlining online events and fundraisers.

While the Harris-Biden feud now seems like ancient history, what may still be relevant is her prosecutorial record as San Francisco district attorney and later as California attorney general.

Even before she announced her White House bid in January of last year, Harris’ record as a “progressive prosecutor” was being scrutinized and criticized by some on the left.

And that record was in the spotlight at last summer’s second Democratic primary debate in Detroit, as the senator faced withering attacks from Biden and another rival, Rep. Tulsi Gabbard of Hawaii.

The former vice president accused Harris of keeping nonviolent prisoners behind bars during her tenure as California attorney general because they were a source of cheap labor for the state.

“What happened? Along came a federal judge and said enough is enough and he freed 1,000 of these people,” Biden said as he argued that Harris was forced by a judge to release the prisoners.

Gabbard also jumped in to land heavy blows – accusing Harris of keeping “people in prison beyond their sentences to use them as cheap labor for the state of California.”

While the intra-party rifts from 2019 appear to have healed long ago, the attacks from past primary debates could be used as ammunition by President Trump’s campaign and allied groups to target Biden and Harris. And it remains unclear whether the progressive flank of the party will embrace her.

Harris, who was elected to the Senate in 2016, grabbed plenty of attention two years later for her grilling of Supreme Court justice Brett Kavanaugh during his contentious confirmation hearings.

Harris was a co-sponsor last year of The Green New Deal.

As a presidential candidate, she announced her support for the federal legalization of marijuana. The senator was an original co-sponsor of Sen. Bernie Sanders’ single-payer “Medicare-for-all” bill, which if enacted would essentially eliminate private insurance. But she moderated her stance during her nearly year-long White House bid. Harris took a political hit last summer when she introduced a health care plan that allowed for private insurance to co-exist with a government run system.

The senator’s called for a national moratorium on the death penalty. And on gun violence, Harris has proposed a ban on importing AR-15-style assault weapons and supported a national buyback program for such weapons. She also said on the campaign trail that if elected president, she would sign executive orders requiring enhanced background checks for weapons purchases if Congress failed to act.

Choosing a running mate is arguably the most consequential decision a presidential candidate can make.

Biden announced in March during a one-on-one Democratic primary debate with Sen. Bernie Sanders that if he won the nomination, he’d name a woman as his running mate.

And the former vice president emphasized for months that he needed to choose a running mate who’s “simpatico with where I am,” pointing to his own strong relationship with former President Obama during their eight years together steering the country.

Starting in late May, after the outbreak of protests in cities nationwide over systemic racism sparked by the death of George Floyd, a Black man who died while in police custody, the volume was turned up on calls for Biden to name a Black woman as the Democratic Party’s vice presidential nominee.

Biden told reporters during a rare news conference at the beginning of July that he had prepared a list of “women of color” for consideration – but he wouldn’t announce a decision until August.

Three weeks later he acknowledged that of those he was considering for this running mate, “among them there are four Black women.” The former vice president made his comments during an MSNBC interview.

Among the other Black candidates Biden was thought to be considering were Rep. Val Demings of Florida, who is a former Orlando police chief; Atlanta Mayor Keisha Lance Bottoms; former Georgia House leader and 2018 gubernatorial nominee Stacey Abrams; former U.S. ambassador to the U.N. under President Obama Susan Rice; and Rep. Karen Bass of California.

Biden was also thought to be considering progressive Sens. Elizabeth Warren of Massachusetts, who was a Biden rival during the Democratic nomination race; Tammy Baldwin of Wisconsin; and Tammy Duckworth of Illinois, the first Thai-born woman elected to Congress and an Iraq war veteran who lost both of her legs piloting helicopters in combat. Also believed to be on his list were Govs. Gretchen Whitmer of Michigan and Michelle Lujan Grisham of New Mexico.

Many of the other contenders congratulated Harris on Twitter after the announcement was made.

Biden’s naming of his running mate came just several days before the Democratic National Convention is scheduled to kick off on Aug. 17.