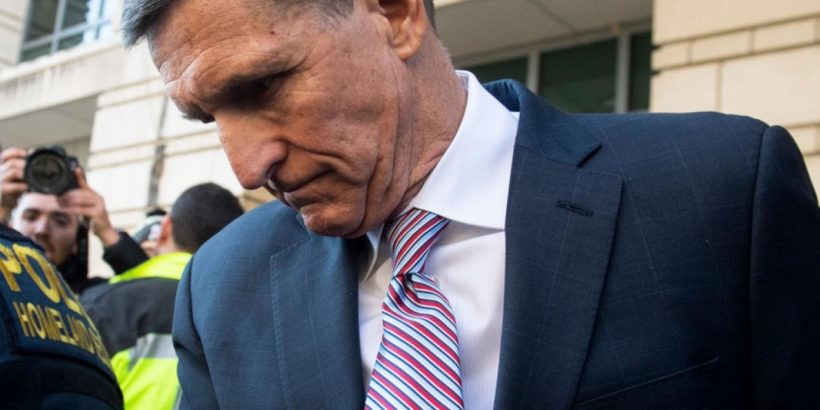 A senior FBI official’s handwritten notes from the earliest days of the Trump administration expressed concern that the bureau might be “playing games” with a counterintelligence interview of then-National Security Adviser Michael Flynn to get him to lie so “we could prosecute him or get him fired.”

The notes and other emails were provided to Flynn’s lawyers under seal last week and released Wednesday night by court order, providing the most damning evidence to date of potential politicalization and misconduct inside the FBI during the Russia probe.

The notes show FBI officials discussed not providing Flynn a Miranda-like warning before his January 2017 interview —  a practice normally followed in such interviews — so that he could be charged with a crime if he misled the agents, the officials said.

“What is our goal? Truth/Admission or to get him to lie, so we can prosecute him or get him fired?,” the handwritten notes of the senior official say. The notes express further concern the FBI might be “playing games.”

Multiple officials confirmed to Just the News that the author of the notes is William Priestap, the now-retired FBI Assistant Director for Counterintelligence and the ultimate supervisor for fired agent Peter Strzok, who led the Russia probe.

Justice Department officials are investigating whether Priestap’s notes were written in conjunction with meetings he had with top leaders like then-Director James Comey and then-Deputy Director Andrew McCabe, officials said. A special prosecutor is reviewing DOJ’s and the FBI’s handling of the Flynn prosecution, which led to the former Trump adviser and retired general pleading guilty to lying to the FBI under a plea deal with Special Counsel Robert Mueller in the Russia case.

Flynn’s lawyer Sidney Powell filed a court motion last week saying new evidence has emerged showing Flynn was “framed” and his conviction should be dismissed. The officials said the notes are part of that new evidence and had been withheld from Flynn’s defense team for years even though they were potential evidence of innocence.

More evidence is being produced in the next few days that will further illuminate the FBI’s conduct in the case that is now at the center of the DOJ investigation, officials said.

Among the new evidence released Wednesday night is an email chain involving former FBI lawyer Lisa Page and Strzok, the lead agent in the Russia probe known as Crossfire Hurricane. In the email exchange, the two and others discuss whether the FBI has to follow its normal rules and give Flynn the customary “1001 warning” at the start of his interview that if he misled agents he could be charged criminally.

“I have a question for you,” Page wrote in an email that included Strzok. “Could the admonition re 1001 be given at the beginning at the interview? Or does it have to come following a statement which agents believed to be false? Does this policy speak to that?

She added: “It seems to be if the former then it would be an easy way to just casually slip that in, Of course you know sir federal law makes it a crime to…”

A while later, Page gets an emailed response: “I haven’t read the policy lately, but if I recall correctly, you can say it any time. I’m 90 percent sure about that, but I can check in the a.m.”

The mere fact that FBI agents were using phrase like “slip that in” when talking about a warning designed to protect someone’s constitutional rights is certain to give Flynn’s lawyers more fodder to argue in court that his January 2017 interview was a set up as Powell has argued,

It is that January 2017 interview that Flynn was accused of lying in, though evidence has already emerged that FBI agents did not believe he was being deceptive and simply had a faulty memory. Flynn is now seeking to vacate his guilty plea and be exonerated.

The handwritten notes suggest the FBI official had concern about the way his bureau was approaching the interview with Flynn.

“I agreed yesterday that we shouldn’t show Flynn [REDACTED] if he didn’t admit • I thought @ it last night, + I believe we should rethink this,” he wrote.

Later he added: “If we’re seen as playing games, WH will be furious • Protect our institution by not playing games.”

The notes hint that some in the FBI might have believed giving Flynn the normal warning or allowing him the courtesy to see a transcript of his calls with Russians to refresh his recollection was “going easy” on the new Trump national security adviser.

“I don’t see how getting someone to admit their wrongdoing is going easy on him,” the official wrote to himself.

READ THE NOTES BELOW: