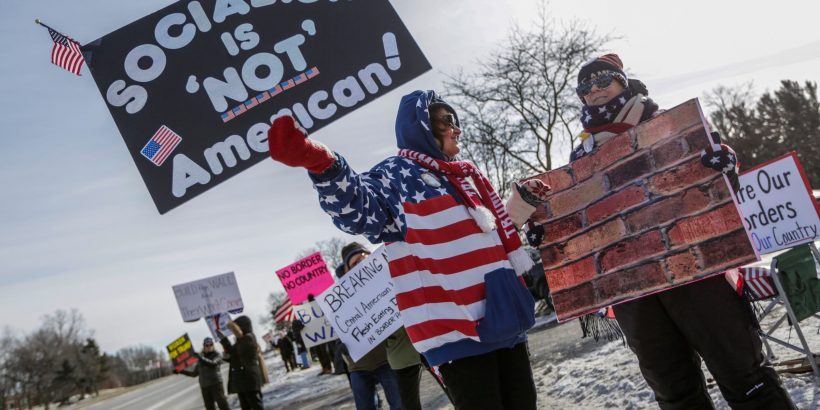 In preparation 2022 election, the Republican Party is reorganizing itself by finding conservatives and Republicans in local communities and getting them involved in party activities on the county level, Nikki Claibourn, a director at the Charleston County Republican Party, told EpochTV’s “Crossroads” program.

The message Claibourn and other Republican activists convey to people when trying to get them involved is, “Do we want to live in a communist country … or a socialist country?”

A lot of people are afraid of socialism and are concerned about policies that are currently in the process of being enacted in the United States, especially President Joe Biden’s executive orders, Claibourn said. “People feel [the policies] are infringing upon their rights.”

People are afraid of what would happen to the country in the upcoming years if these trends continue, Claibourn said. “So that is what really has people on fire.”

For people who argue that these policies are not socialist or communist, Claibourn encourages them to read the Constitution and look carefully at the executive orders being passed.

An example of one policy that concerns people is the COVID-19 stimulus checks that the government sent out, Claibourn explained.

“I know a lot of people that would say: ‘I didn’t ask for this check. I don’t want this check. You’re basically giving me back my money.’ It’s taxpayers’ money,” she said.

Republicans Reach Out to Communities

One of the forms of reaching out to communities is participation in food banks, which helps to get the message out that the Republican Party cares about homelessness and people who cannot afford food, Claibourn said. “There are a lot of social issues that Republicans do care about.”

The message however does not get out partly because most media are not willing to report on it, except only a few media organizations, Claibourn explained.

However, the Republicans volunteering at food drives get a chance to talk to other volunteers there, Claibourn said.

“When [other volunteers] find out that we’re Republicans, they react and say, ‘Wow, we didn’t know you guys cared.’ Yeah, we care,” Claibourn said.

Another way to reach out to communities is the annual nonpartisan Black History Banquet organized by Charleston County Republicans to honor and celebrate accomplishments that African Americans made in their lives and for their communities, Claibourn continued.

Publicly recognizing black Americans who have been successful in their lives helps to dispel the notion “about black people not necessarily being successful, not giving back,” said Claibourn, who is the director of the Charleston Republican Party’s Black History Banquet.

This year they planned to honor a successful businesswoman who turned making sweetgrass baskets—a craft dating back hundreds of years—into a profitable business, Claibourn said, but unfortunately, this year event had to be postponed due to the COVID-19 pandemic.

It was expected that the event would attract a lot of honorees, especially Democrats coming to their side, but only a few came, Claibourn said. “It’s been tough.” However, those who came have a lot of conservative values, she added.

Claibourn is a former Democrat who became a Christian after moving from California to South Carolina. “My conservatism came about because I believe in what the Bible says,” she explained.

She used to believe in a “Democrat way” because she was reared by her mother who was a Democrat.

Her involvement with the Republican Party was not only a consequence of her turning conservative but was also influenced by her father who was a military man and a Republican, Claibourn continued.

Her father used to say to her, “Regardless of who is our commander in chief, you live in the greatest country in the world, because as a woman, if you lived in another country, you likely would not have the rights that you have here in the United States,” Claibourn recalled.

More and more conservatives are getting involved in Republican Party activities and coming to party meetings, Claibourn said. They are very enthusiastic about their involvement, she added.

Her community work is primarily conducted in Charleston County. The county used to be red Claibourn said, but now people call it purple because it is in between. The county sheriff, who was a Republican and had held the post for decades, has been unseated in the 2020 election by a Democrat, Claibourn said, calling it upsetting.