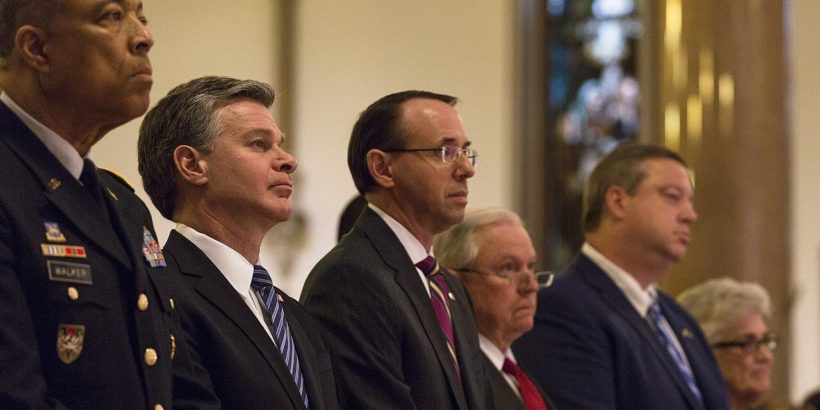 The Aug. 2, 2017 scope memo, which was provided by the Department of Justice (DOJ) to the Senate Judiciary Committee following requests from Sen. Lindsey Graham, R-S.C., cited Steele dossier collusion conspiracy theories about Manafort and Page.

Rosenstein ordered Mueller to investigate allegations that Page “committed a crime or crimes by colluding with Russian government officials with respect to the Russian government’s efforts to interfere with the 2016 election[.]” The same language was used to justify the targeting of Manafort.

Rosenstein’s memo also peddled discredited legal theories about the Logan Act, a 1799 law criminalizing political speech by American citizens that has never been successfully prosecuted, to justify investigations of former White House National Security Adviser (NSA) Michael Flynn. The scope memo directed Mueller to investigate allegations that Flynn “committed a crime or crimes by engaging in conversations with Russian officials during the period of the Trump transition.”

The Mueller probe, after nearly two years and tens of millions of dollars, unearthed no evidence of collusion by any Trump campaign officials. However, a sprawling investigation by the DOJ Office of Inspector General found that Rosenstein’s DOJ fabricated evidence and falsified documents to justify an illegal federal spy warrant against Page. A Federal Bureau of Investigations (FBI) lawyer, reported to be Kevin Clinesmith, allegedly altered documents from a U.S. intelligence agency to erase evidence that Page had for years worked on behalf of the U.S. government to help investigate Russian agents who were attempting to damage the U.S. and compromise national security.

The OIG investigation also revealed that Rosenstein’s DOJ repeatedly lied to federal courts and used bogus claims from Steele, who was funded by the Clinton campaign and the Democratic National Committee, to secure wiretaps against Page, who has never been formally charged with any wrongdoing. Rosenstein personally signed at least one of the false Foreign Intelligence Surveillance Act, or FISA, spy warrants against Page.

The new declassifications of portions of Rosenstein’s memo affirm charges from Rep. Devin Nunes, R-Calif., the ranking member on the House Permanent Select Committee on Intelligence, that Rosenstein used the Steele dossier to justify and direct Mueller’s special counsel probe.

“[I]t’s clear that false allegations from the Steele dossier played a major role not only in the FISA warrant application on Page, but in the appointment of the Special Counsel as well,” Nunes said in a statement after a lengthy report detailing Mueller’s investigation was released in 2019. Until now, those facts had been hidden behind redactions in the Rosenstein document.

Flynn, the former NSA, was eventually coerced into pleading guilty to making false statements to FBI agents. New documents released by the DOJ in that case, though, show that the FBI repeatedly abused its power during its investigation of Flynn and that one of Mueller’s top prosecutors, Brandon Van Grack, may have lied in federal court about the FBI’s basis for the interview in which Flynn allegedly lied. Newly released handwritten documents from Bill Priestap, the former top FBI counterintelligence official, showed that a primary goal of the FBI in investigating Flynn in the first place was “to get him fired.” Other FBI documents, released last week by the DOJ, show that the original FBI investigation of Flynn found no evidence of collusion and that the investigation was only kept open at the demand of fired former FBI agent Peter Strzok.

By Sean Davis, co-founder of The Federalist.