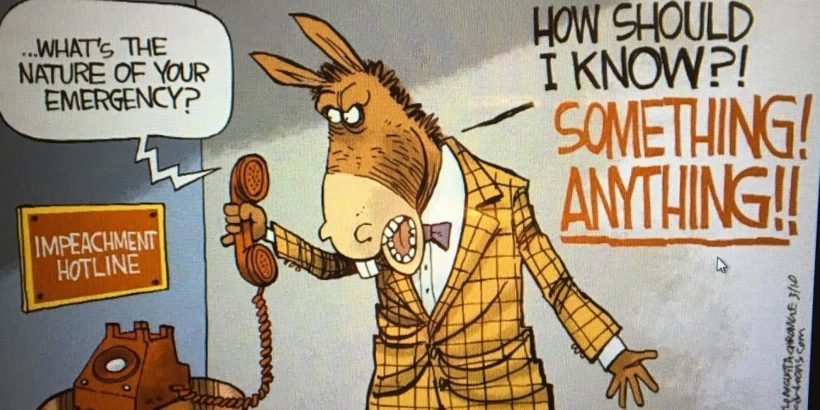 This fake Impeachment Inquiry is a real Donkey Show

When you hear, “The Rule of Law is broken”, believe it.  There’s a pattern by the Democrats of making up the rules as they go, and it’s nothing new. They’ve had years to hone their skills of manipulation and disregard for our Constitution – Wordspeak is their game – and it’s all about seizing raw power and keeping it.  Regaining their 18-year plan for the New World Order is absolutely necessary to them, and Trump is in their way.

Those who insist on having their own way will justify anything to get their own way.  What drives them?  Desperation and power – so they create mayhem based on phony accusations … hell-bent on silencing President Trump any way they can, lest they themselves are exposed and convicted of henious crimes committed over many years, including treason. Think Hillary and Bill Clinton, Obama, Schiff,  Pelosi, Schumer,  Nadler, and many others.  It’s either President Trump or them, and they know it.

Going by the rule of law would not give them the results they so desperately need, so manipulating and ignoring the law is the only way they can possibly win. But will they win?  I highly doubt it.

BTW:  If Eric Ciaramella is the real whistleblower, then their entire Impeachment scheme implodes.  Nice.  Let’s see how they manipulate this one.

May the Hounds of Heaven chase them.

A while back, we examined Hillary’s participation on the Watergate committee in 1974, when she was a 26-year-old recent law school grad, and the proposals she made — thankfully shot down by the Judiciary Committee — to control the process for impeaching Nixon. Now that the full House of Representatives has voted, along partisan lines, to approve rules for Schiff’s “impeachment inquiry,” which still has not been formally initiated, we can see that when it comes to denying a political enemy due process, Hillary (at least then) was an amateur.

Since those days, the Democrats have refined their skills and expanded their tactics. As I’ve said, they do not care about preserving concepts such as due process and executive privilege. With glistening eyes, they brandish the Constitution while knowing deep in their hearts that they would secretly use it for toilet paper if that got them what they want at the expense of their political enemies. They worship one thing, and that is power. We now see, very clearly, that the “whistleblower” complaint that kicked off Schiff’s secret “inquiry” was a set-up from the start. And it’s not an impeachment at this point, just a way for Schiff to pick and choose what he wants to release to try to shape a narrative that calls for one.

So, what are the “rules” that just got approved by the Democrats (no Republicans voted for this garbage), and how does this process differ from that followed by the Judiciary Committee during the Clinton inquiry? To start with, we don’t have the Judiciary Committee looking into it; we have numerous other committees instead.  Here are a few more examples…

Schiff has the authorization to make transcripts public, BUT HE IS NOT REQUIRED TO

He must prepare a report for the Judiciary Committee, BUT HE GETS TO SAY WHAT GOES IN IT.

Other committees are authorized to hand over “records” and “materials” to the Judiciary Committee, BUT THEY DON’T HAVE TO.

The resolution does provide for some due process,BUT ONLY AFTER THE CASE IS REFERRED BY SCHIFF TO THE JUDICIARY COMMITTEE.

Committee chairs must consult with the ranking (Republican) member,BUT APPARENTLY THEY GET TO CHOOSE WHAT THEY REVEAL AND WHAT THEY DON’T.

This means the House may choose to withhold information exculpatory to President Trump. During the debate on this provision, Arizona Republican Debbie Lesko proposed that the language be changed to say the chairs of those committees “shall” be required to transmit exculpatory evidence to the Judiciary Committee. The ensuing discussion tells you all you need to know: that the Democrat congressional leadership is capable of using mental gymnastics to rationalize ANYTHING and counter ANY argument made by a Republican.

Joel B. Pollack at Breitbart News lays it out (link below). Lesko thought it was absurd for members to have to rely on a partial account provided by Schiff, and noted that in previous impeachments, members of the Judiciary Committee would have heard the entire testimony for themselves, including exculpatory evidence. “There is no reason why anybody in this body should disagree that all materials must be transferred to the members of Congress on the Judiciary Committee,” she said.

Well, who needs a reason? Democrats don’t, but they countered with some lame ones. Rules Committee chair Jim McGovern of Massachusetts said there might be national security risks associated with transferring all the evidence. Lesko pointed out that, at least at this point, there is no classified material involved and that members could not be expected to vote on impeachment with incomplete information.

Sure they could!  Democrats countered Lesko again by saying that language such as “shall” (as opposed, I guess, to “may if they feel so inclined”) would be “too broad, taking in irrelevant as well as relevant information.”

Georgia Rep. Bob Woodall argued that the committees were already authorized to turn over everything if they wanted to; this would just guarantee that exculpatory information definitely would be.

Not so fast! McGovern countered by saying that Republicans would be allowed to submit a minority report –- mighty nice of them –- and that if Republicans had been serious about improving the bill, they would have submitted their improvements earlier.  (See?  It’s all Republicans’ fault!)

Republicans pointed out that they had received the resolution only 24 hours before.

Too bad!  “I understand the point Ms. Lesko is making,” McGovern said, “but I think it’s a poorly drafted amendment. And I think it is all-encompassing, and I think it could potentially be dangerous to somebody.”

Doesn’t matter! Maryland Rep. Jamie Raskin countered Burgess with the false canard that the impeachment process is like a grand jury. Lesko had already attacked that argument by saying a grand jury wouldn’t be allowed to leak the way the Democrats on this committee have been doing.

So what! Raskin then countered with the ludicrous claim that the resolution was going to make all the material available to all the members. Lesko pointed out that the resolution merely “authorized” them to release it; it didn’t require them to, which was why she had proposed an amendment requiring that.

Also, here’s a good opinion piece to serve as follow-up on Eric Ciaramella, who has been named by many sources as the person who posed as a whistleblower to kick off the “inquiry.” It reiterates what we reported yesterday, that this person, with his ties to John Brennan and others in the group spearheading the attempted “Trump/Russia” take-down; that this is someone who had tried before to use leaks from the White House to damage Trump; that his other associations, such as with DNC officials, are telling; and that an acknowledgement of his identify destroys the anti-Trump narrative and shows it to be an obvious set-up.

“Moving forward on impeachment based on the word of Ciaramella is like initiating a study to prove tobacco is healthy because of a report presented by Philip Morris,” it says. But as we see from the bizarre debate over “inquiry” rules, that won’t stop the Democrats from shooting down any arguments against doing so.

If Eric Ciaramella really is the whistleblower, the whole impeachment narrative is decimated