A breakdown of society reveals itself in Seattle.  It didn’t happen overnight.

Left Behind: Homeless Crisis in Seattle

In the summer of 2019, Fox News embarked on an ambitious project to chronicle the toll progressive policies have had on the homeless crisis in four West Coast cities: Seattle, San Francisco, Los Angeles and Portland, Ore. In each city, we saw a lack of safety, sanitation and civility. Residents, the homeless and advocates say they’ve lost faith in their elected officials’ ability to solve the issue. Most of the cities have thrown hundreds of millions of dollars at the problem only to watch it get worse. This is what we saw in Seattle.

SEATTLE — The richest man in America calls Seattle home. So do thousands of others who are forced onto the streets because they are too poor, too addicted or too detached from reality. At night, the city’s homeless sleep wherever they can — in tents crammed in parking garages, in parks or under highway overpasses. Some feel victimized by a society that has moved on without them. Others feel preyed upon by politicians eager to push pet projects and scattered initiatives that make themselves look good but do little else. Sick of stepping over used condoms, broken lighters and needles, residents say they are heartbroken to see the city they’ve loved turn into a dangerous, drug-infested den of filth and human misery.

People say they don’t feel safe or protected in places they once did, and have lost confidence in their elected leaders’ ability to turn the situation around.

“It’s no secret that — despite all the efforts — our city has shown itself incapable of dealing with the severe problem brought about by chronic homelessness, mental illness and drug abuse,” Father Michael Ryan of St. James Cathedral wrote in a June 14 letter to congregants. Ryan, the pastor at Seattle’s largest Catholic church, asked that everyone “pray that, in the days ahead, we will be able to find the balance we need in order to be not only a welcoming place, but a safe place.”

“It’s no secret that — despite all the efforts — our city has shown itself incapable of dealing with the severe problem brought about by chronic homelessness, mental illness and drug abuse…”

The letter was in response to a homeless man storming the church and smashing a 200-year-old wood carving of Mary with a large rock. There was another incident in which a homeless man walked into the crowded church, appeared to have a violent fit and broke a 15-foot bronze crucifix. The church’s Seat of Wisdom statue in its courtyard also has been damaged. Things have deteriorated to the point that St. James now has a uniformed officer present during all weekend Masses.

SAMARITAN: REVOLUTIONARY APP LETS USERS DIRECTLY DONATE TO AND INTERACT WITH THE HOMELESS IN THEIR NEIGHBORHOODS

In Seattle, arguably the country’s most liberal city, homelessness remains one of the most divisive topics. Over the past five years, the city has seen an explosion in homelessness, crime, substance abuse and addiction. Residents say they struggle to balance compassion with growing resentment.

Including private and public money, the region spends about $1 billion a year fighting homelessness. That’s $100,000 for every homeless man, woman and child in King County and yet the needle has mostly been moving in the wrong direction. Residents say there is a deep disconnect between them and those in charge and say elected officials are tone-deaf and offer up simple solutions to a complex problem.

During an explosive Ballard Town Hall meeting in 2018, the crowd turned on City Council members Mike O’Brien, Teresa Mosqueda, Lorena Gonzalez and Lisa Herbold after O’Brien told a woman who was complaining about the increase in crime to “call 9-1-1.”

The crowd erupted and the woman tore into O’Brien’s response.

“You’ve lost all credibility when you say those two words — call 9-1-1,” she said. “Do you understand that the police have told us to vote you all out so that they can do their jobs… and you’re telling us to call 9-1-1?”

The town hall had plenty of other fireworks which prompted local television station KUOWto dub the meeting as “the day that Seattle Nice died.”

Residents Fox News spoke to have complained the city’s “compassion campaign,” which encourages prosecutors to drop misdemeanor charges including theft, assault and drug possession, is misguided and puts them at risk.

James, a commuter who declined to give Fox News his last name, says he has watched his beloved city turn from a place of pride into a danger zone. 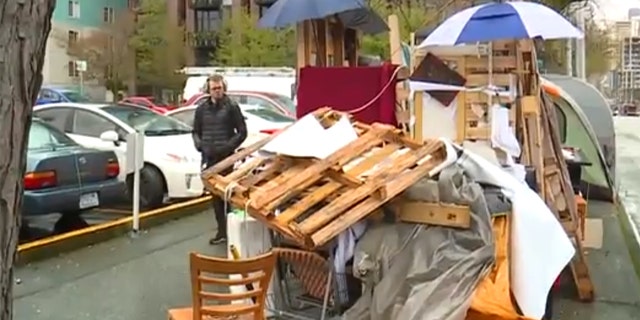 The homeless “mansion” was put together with whatever items people could scrounge together. (Q13)

“You used to be able to come down here and you’d see a quarter less of this stuff,” he said, looking around at the dozen or so homeless men spread out in Pioneer Square. “I work across the street and there are shootings. I see people walk between buildings dealing drugs during the middle of the day and the police standing next to them not doing anything.”

Jayma Cohn, manager of a clothing store in downtown Seattle, says she’s been yelled at while walking to work. She’s also witnessed aggressive behavior and has watched as a group of homeless men harassed tourists. She’s also seen a lot of drug use.

“I saw a woman smoking crack in her wheelchair near the bus stop,” she told Fox News, adding that the woman sells drugs from the same spot daily.

“I saw a woman smoking crack in her wheelchair near the bus stop.”

In late 2018, prosecutors in King County, which encompasses Seattle, became the first in the nation to stop charging people for possessing small amounts of drugs, including meth, heroin and crack. Many of the people cops would normally arrest are now offered treatment. Supporters say it’s an innovative approach, but critics argue it complicates how Seattle handles its homeless.

“I think the decriminalization of drugs is a problem,” Awan Johnson, a personal trainer in Seattle, told Fox News. “Whenever you play that card, you’re moving the responsibility somewhere else.”

Seattle officials are also quick to blame big businesses operating in the area — Starbucks, Microsoft and Amazon — for driving up housing costs. While the inability to keep up with rising rents undoubtedly plays a role in homelessness, Seattle leaders have been slow to admit that higher rents alone don’t push people onto the streets.

In an effort to address the homeless crisis, Seattle’s City Council has looked at different ways to raise money. In May 2018, they unanimously approved a $275 tax per employee on Seattle’s largest employers. Pitched as a progressive revenue source aimed at tackling homelessness, the tax was estimated to raise $47 million a year.

About a month after approving it, the City Council reversed course after intense backlash from the companies and workers that the tax was misguided. Amazon even temporarily halted construction planning on a new high-rise building near its Seattle headquarters in protest, and construction workers, worried they might lose their jobs if businesses left the area, packed city hall to demand a new vote.

“I am deeply troubled and disappointed by the political tactics utilized by a powerful faction of corporations that seem to prioritize corporations over people,” Councilwoman Gonzalez said, despite backing the reversal. 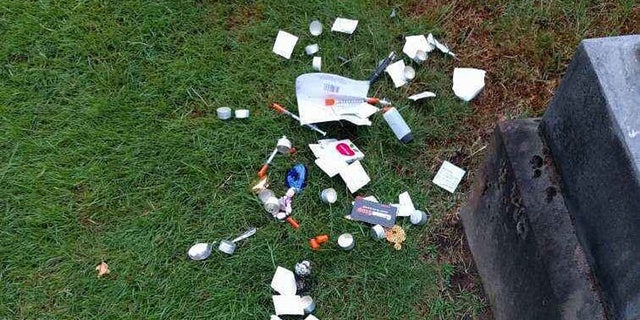 Groundskeepers frequently find trash and other debris at the cemetery in Seattle. (Courtesy Ari Hoffman)

The tax fiasco not only illustrated how quickly the city would cave to big business, but also how frustrated and angry residents had become over Seattle’s lack of progress.

A 2019 Seattle Times poll showed that while there’s strong support for the city to expand mental health and substance abuse treatments for the homeless, there’s skepticism of the elected officials’ ability to do it.

Most of those polled believed throwing money at the problem isn’t a cure-all. According to the Times, 53 percent of Seattle voters now support a zero-tolerance policy on homeless encampments. Sixty-two percent believe the problem is getting worse because the city “wastes money by being inefficient” and isn’t held accountable for how the money is spent.

Instead of waiting for Seattle and its surrounding cities to get their act together, business owners, residents and faith-based groups are now taking up the cause.

In July, Grace Lutheran Church in Bellevue donated more than $3.6 million for homeless services in King County. And when the area’s only men’s shelter looked like it would be shut down, a team of architects and civil engineers worked together to design a pro bono renovation that would bring the shelter up to code. A local company covered the construction costs, but there was still another $75,000 worth of work that needed to be done. Earlier this year, Microsoft, Puget Sound Energy and 84 other high-profile donors chipped in $100,000 each. 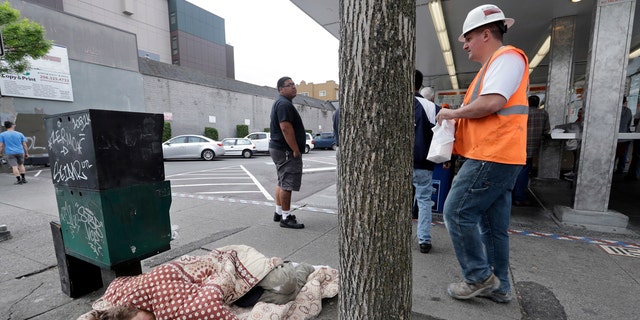 In this May 24, 2018, file photo, a man sleeps on the sidewalk as people behind line-up to buy lunch at a Dick’s Drive-In restaurant in Seattle. (AP Photo/Elaine Thompson)

The Metropolitan Improvement District, a non-profit funded by property owners and managed by the Downtown Seattle Association, has also put together a team of outreach workers that do everything from keeping public areas clean to handing out food. Their second chances program gives people who live on the street a way out.

“All of our ambassador positions in our cleaning program have really been oriented around folks coming out of homelessness who are living on the street one day and then a week later they are cleaning the same portion of the street,” Jon Scholes, president of the Downtown Seattle Association, told Fox News. “Now they are getting wages and benefits. They’ve got a retirement plan.”

“It will be because we came together as a city,” he told Fox News. “Not because we waited for this administration or the next or the one after that to figure it out.”