“Free Zone”  with no police?  Free it’s not, enslaved it is.

Don’t be fooled – Its real purpose is to establish Sharia Law Zones!

Seattle police: “We’ve heard, anecdotally, reports of citizens and businesses being asked to pay a fee to operate within this area. This is the crime of extortion. If anyone has been subjected to this, we need them to call 911”

Seattle police say they have received reports of armed guards and potential extortion in a self-declared autonomous zone that spans several blocks and includes a now-closed precinct.

“We’ve heard, anecdotally, reports of citizens and businesses being asked to pay a fee to operate within this area. This is the crime of extortion. If anyone has been subjected to this, we need them to call 911,” Assistant Chief of Police Deanna Nollette said on Wednesday.

The seemingly abandoned East Precinct station of the Seattle Police Department is covered in a tarp declaring it ‘property of the Seattle people’. Protesters declared a Cop Free Zone following days of demonstrations in response to the police-involved death of George Floyd in Minneapolis. (Toby Scott/SOPA Images/LightRocket via Getty Images)

The region encompasses the SPD’s East Precinct, which was abandoned by cops on Monday following days of violent clashes between law enforcement and protesters in the wake of George Floyd’s death, as well as parts of Capitol Hill.

Officers retreated from the area in an effort to quell the violence– which included multiple shootings, one that was sparked after a man rammed his vehicle into a crowd of protesters. Police officers have deployed tear gas and pepper spray to disperse large groups of people.

“We wanted to be able to facilitate and support peaceful demonstrations,” Nollette said.

Demonstrations within the autonomous zone have been mostly peaceful, with no reports of violence, but police say armed guards have been surrounding the perimeter of the region and residents who live within the boundaries are “forced to show ID to prove you “belong” there,” a law enforcement official told Fox News.

A volunteer works security at an entrance to the so-called “Capitol Hill Autonomous Zone” on June 10, 2020 in Seattle, Washington. (Getty)

Speaking on the condition of anonymity because they are not authorized to discuss the unfolding situation, the official told Fox News some people living in the area — which includes numerous bars, restaurants, businesses and private residences  — have been “begging for help because they are not being allowed into their homes without ID.”

Police have been told to stay away from the region unless there is a call to 911 for help.

The official also added that leaders in the anti-cop zone are “starting to extort money from the local businesses within the border for ‘protection.'”

Mckenzie Diamond, who lives in the “Autonomous Zone,” told Kiro 7 the experience has been “a bit stressful.”

“It’s like checking in with somebody to get into your own home,” Diamond told the news outlet.  “Just making it so people can get into their buildings. Keep the zone however they want, and move the fencing so people can go home.”

A sign is seen on a barrier at an entrance to the so-called “Capitol Hill Autonomous Zone” on June 10, 2020 in Seattle, Washington.  (David Ryder/Getty Images)

“No one at these checkpoints has the legal authority to demand identification from anyone. We ask if anyone is subjected to these demands to call 911 and report the incident,” Nollette said.

“While Washington is an open-carry state, there is no legal right for those arms to be used to intimidate community members,” she told Komo News.

Nollette also added that they are aware of threats to burn down the East Precinct, which she said “would endanger residents, firefighters and businesses.”

The police department is looking to start negotiations with the leaders of the protest movement to gain access to the police precinct but are unsure of who is leading the demonstrations.

“It’s just a matter of establishing this dialogue. We’d love nothing more than to be able to open our precinct buildings,” Nollette said. “What we want to do is give an opportunity for everyone’s tempers to calm, and for us to approach the table with a view towards equality.”

A protester sits out of the window of a car with an American flag as a youth-led protest group walks towards the Seattle Police Department’s West Precinct in Seattle, Washington, U.S. June 10, 2020.  (Reuters)

Supporters of the movement have posted photos on social media depicting a large, but peaceful scene.

Within the blockaded region, occupiers have set up tents, painted murals, and have music playing from speakers throughout the night.

Joe Mirabella
But before it dissapears it is worth swinging by while social distancing & wearing a mask. Check out the art, listen to some speakers, learn something new, buy something from a local business, take some photos, and then decide how you can live an anti-racist life.

Here are some photos. 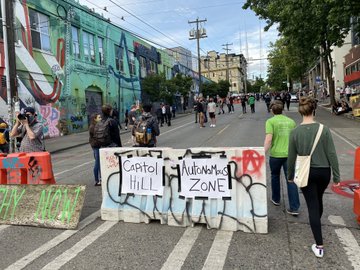 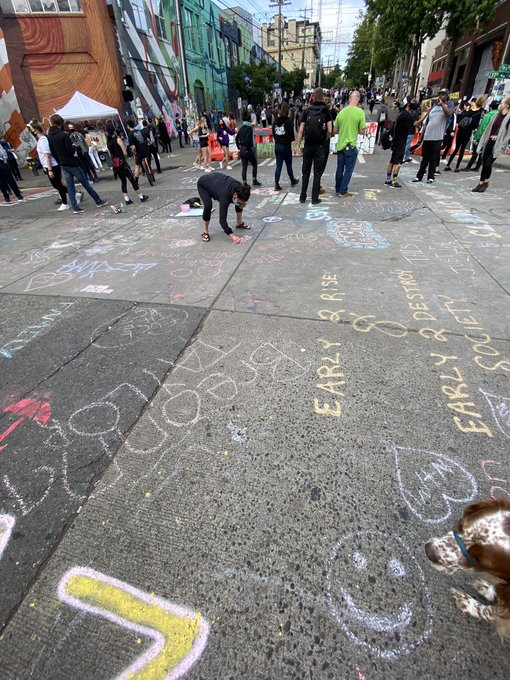 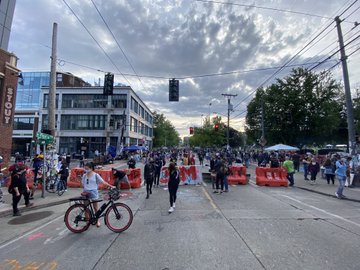 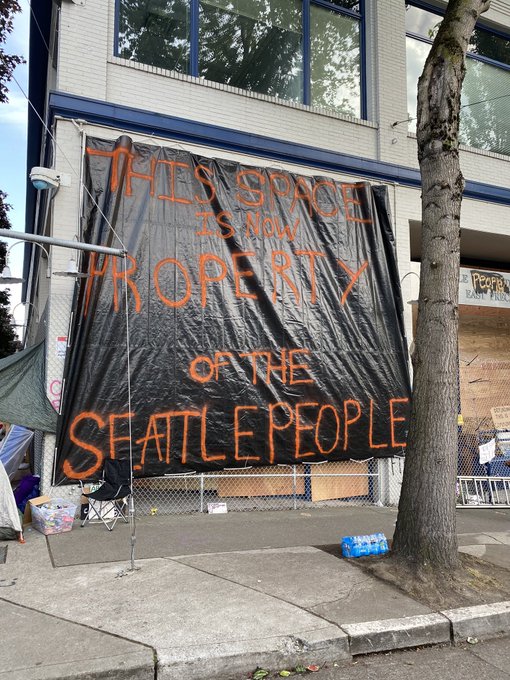 One resident in the area told police that there were “tents lining my streets, barricades littered throughout the intersection by protestors, and civilians walking around with AR15s,” an official told Fox News. “And the noise has not stopped.”
Seattle Fire Chief Harold Scoggins, whose firehouse is a few blocks from the region, has been one of the only city officials seen in the area working alongside demonstrators, according to Komo News.

“Well, we got a team, we are working through this and there is some trust built and I don’t want to compromise the trust,” Scoggins told the news outlet.

On Wednesday, President Trump demanded “LAW & ORDER!” in Seattle as the scene unfolded.

“Domestic Terrorists have taken over Seattle, run by Radical Left Democrats, of course,” he said on Twitter.

“Radical Left Governor @JayInslee and the Mayor of Seattle are being taunted and played at a level that our great Country has never seen before. Take back your city NOW. If you don’t do it, I will,” Trump wrote. “This is not a game. These ugly Anarchists must be stooped IMMEDIATELY. MOVE FAST!”

One of the perceived leaders of the movement, Raz Simone, tweeted a response to Trump on Wednesday decrying that he is “not a Terrorist Warlord.”

“The President really put a hit on my head. I’m not a Terrorist Warlord. Quit spreading that false narrative,” Simone tweeted. “The world has NEVER been ready for a strong black man. We have been peaceful and nothing else. If I die don’t let it be in vain.”