PERSPECTIVES ON THE PANDEMIC
The Epicenter Nurse; A Conversation With Erin Marie Olszewski 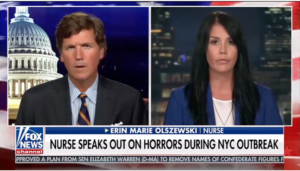 “No Governor let more people die from coronavirus than Andrew Cuomo did. His policies killed thousands. Now, a nurse has released shocking undercover video footage of what actually happened in New York’s hospital.”

“Very few countries in the world lost more people to coronavirus than New York did and no states lost more in the United States. How exactly did that happen? It’s a question that needs a serious answer. Many people died. Finding out seems of no interest whatsoever to the press, they’d rather shame people for visiting the beach. Erin Marie Olszewski is a nurse. She spent almost a month working in New York’s Elmhurst Hospital, that was the epicenter of the coronavirus outbreak.  She was so shocked by what she saw, she began to collect undercover footage what was happening around her.”

The video you are about to see will shock you. ERIN has sound documentation as well as video footage to support her story and she is sharing far and wide what she witnessed.

From the onset of the coronavirus epidemic in the United States, New York has been described as the epicenter of the outbreak by major news outlets.  Elmhurst Hospital in Queens, became known as, ‘The epicenter of the epicenter.’  When the crisis hit, ventilators were deemed essential, for without them we were told million of patients would die. Why did Elmhurst Hospital get hit the worst? Were ventilators the right approach in treating Coronavirus?

‘When you see the black body bags, you say, what’s in there? It’s Elmhurst Hospital, must be supplies. It’s not supplies, it’s people.” ~ President Trump.

Ventilators were mandated by medical experts. So, President Trump, not being a doctor, acquiesced and asked Ford Motor Company, in the midst of the pandemic, to ask their workers to return for ventilator assembly. Hundreds obliged.

Erin says the hospital in Florida where she worked saw ZERO COVID deaths, because she says they were treating the patients properly. What are they using that is causing a nearly 100% recovery?  Hundreds of doctors are using a combination of vitamins, steroids, blood thinners and Hydroxychloroquine.  Within 12 hours, patients are virtually symptom-free. For decades HCQ has been prescribed by doctors with success for lupus, and other various ailments. She was eager to bring her level of expertise to NY in hopes of helping during this pandemic.

Soon after her arrival, Erin realized protocol was not being followed. Elmhurst Hospital, had been admitting COVID and non-COVID patients, keeping them together on the same floors and sometimes sharing the same rooms. With enough single-bed rooms available, why would hospital administration appear to be so reckless?  She witnessed rooms were not being cleaned properly after a COVID death and said Elmhurst Hospital is run worse than the third-world Iraqi hospital she had been in.  Erin decided to go undercover and report her findings.

Doctors in other states were moving away from ventilators because they realized 60 – 90% of vented patients did not survive. If ventilators have this high of death rates, why is New York’s Governor Cuomo insisting on his state’s hospitals still using them? According to Erin, COVID patients are told, “‘If they don’t get on a ‘vent,’ then they’re probably not going to survive.’ The reality is if they get on that ‘vent,’ the likelihood of them getting out of the hospital is slim to none.”

At $29,000 per COVID death, plus expenses from the patient for ventilators, sedation, paralytics and supplies, makes one wonder if money is behind this gross negligence against humanity. Patients are heavily sedated with drips, one of her patients had NINE drips going at once.  Why so many?  Why are nurses at Elmhurst told not to resuscitate (DNR) when patients code (can’t breathe)?  Why was Erin told not to use an Epi-pen to revive a coded patient, which is considered standard procedure?

How can the Governor of New York or any other state, who does NOT practice medicine, have the right to practice medicine and put a ban on Hydroxychloroquine which has been proven over and over to heal people of COVID-19? If it is prescribed for COVID in the state of NY, physicians risk losing their license to practice medicine. Do governors have the right to intrude on the doctor/patient relationship? Cuomo later amended his order stating HCQ can be used in later stages of COVID, but by then, Erin says, it’s too late.  If patients catch it early, they heal but many are afraid to seek healthcare due to their fear of incompetent providers. This is AMERICA! Why are people afraid to get healthcare? Sadly, this is nothing new and many are searching for alternatives.

At Elmhurst Hospital in Queens, HCQ is rarely used and many, many are dying, unnecessarily. Since there has not been time for proper testing, many states refuse to allow doctor’s to prescribe it. Why doesn’t governor Cuomo at least implement the ‘Right To Try Act’ Executive Order President Trump signed in 2017?

Elmhurst has a policy. Normally they grant the family’s wishes, but now apparently Elmhurst has a COVID policy which states the Elmhurst Hospital does NOT need full family consent. Why not? Since there is NO family with these patients and they are essentially drugged, who speaks on their behalf?

Erin believes, in spite of some bad doctors and protocol at Elmhurst, there are very good doctors and staff at Elmhurst. Many who have seen the medical recklessness are afraid to speak out. Why? Are they being silenced?

One patient who was intubated, overheard the staff discussing his plight. He realized if he didn’t act quickly, he would be a statistic. He removed his own tube, refused their treatment and survived.

Erin learned the hospitals were struggling financially to remain open. In her opinion, this influx of COVID patients is to keep these hospitals open. There is really no rhyme or reason.  Erin believes only 1/2 of the patients admitted to Elmhurst Hospital actually came in with COVID-19. The other 1/2 contracted it there. Once on a ventilator, there is no going back.

Erin enlisted in the Army at age 17. In 2003, she deployed in support of Operation Iraqi Freedom. As part of her duties, she oversaw aid disbursement and improvements to hospital facilities as a military trauma nurse. Erin was wounded in combat. She received the Army Commendation Medal for meritorious service. Erin accepted the charge and was brought to New York from her home state of Florida, by a service funded by (FEMA). She was there 1 month and it changed her life forever.