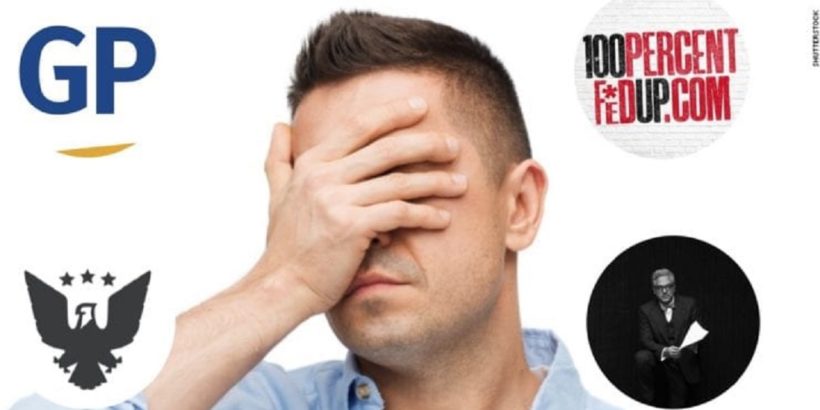 Most fact-checking organizations are bullies, who ignore the lies told by far-left publications like CNN, New York Times, Washington Post, The Atlantic, Buzzfeed, and others while focusing instead on labeling conservative news websites as fake or mostly fake news.

NewsGuard, a relative newcomer in the self-appointed arbiter of truth game, is certainly no exception.

Four days ago, Shayna Elliot of NewsGuard, sent an email to 1oo Percent Fed Up informing us that they were planning to write a report “highlighting social media accounts with high follower counts who have shared what we have found to be voting or election-related misinformation to their large audiences.” As an example of “election-related misinformation,” NewsGuard located ONE article from the 100percentfedup.com website that was posted on the 100 Percent Fed Up Facebook page that they used an example. The article, titled: Critical Swing State of PA: 372,000 Mail-In Ballot Applications Rejected After Discovering 90% Were DUPLICATES, was originally missing the word “Applications.” Once it was brought to our attention, it was immediately corrected.

NewsGuard’s Shayna Elliot wrote to 100 Percent Fed Up on Wednesday:

Your Facebook account (100 Percent Fed Up) is included based on a post* reviewed by NewsGuard which claims “372,000 mail-in ballots rejected” in “critical swing state” Pennsylvania, when in reality 372,000 ballot applications were rejected, a seemingly small but crucial distinction. Voters who were denied a mail-in ballot are still able to vote in person.

If you would like to include an on the record comment, please let me know as soon as possible. We intend to publish our report tomorrow morning, Wednesday, October 28.

Hi Shayna. My name is Patty McMurray. I wrote the article you are referring to. Unfortunately, when we wrote the article, ProPublica, the source we used that broke the story did not, from what I recall, mention “applications,” but instead, focused on mail-in-ballots. We were given a fact check violation by Lead Stories. We immediately corrected our title to add “applications,” and within hours, the fact check violation was removed. End of story.

If you want to talk about election-related misinformation, you might want to focus on CNN, MSNBC, NBC, ABC, CBS, New York Times, Washington Post, etc., who all reported a lie that President Trump was somehow working with the Russians to get elected, when in fact, it was the Democrats and Deep State who pushed a lie about the now disproven Steele Dossier, funded by Hillary Clinton’s campaign. You might also want to look into Hunter Biden’s emails and question why the mainstream media refuses to report on his father’s involvement in his dirty foreign deals. But alas, your focus is on the big stuff, like mail-in-applications vs. mail-in-ballots.

NewsGuard is of no interest to me. Feel free to write whatever you’d like. I’ve actually been waiting for the moment your organization attempted to threaten me again so I could write about NewsGuard and the research I did on the last guy who threatened me from your organization. I’ve taken over 100 screenshots of David Lepeska’s anti- Trump tweets, yet he was posing as a neutral “fact-checker” for your organization when he contacted us and asked us to give him information that we felt was none of his business. Your so-called “fact-check” group behaves more like a mob with a shakedown mentality than a professional organization. I will not be threatened by you or anyone at NewsGuard over the prospect of receiving negative press from you. We are two moms who’ve been publishing accurate conservative news for over 7 years. We have over 2.5  million followers who appreciate our hard work and dedication to the truth. NewsGuard is irrelevant to us.

Please feel free to print my statement (in bold). NewsGuard’s article, a hit piece on 38 major conservative Facebook pages and only TWO small liberal Facebook pages, the Palmer Report, and “Greg Palast” (each page has about 100K likes).

Four of the 38 conservative pages called out by NewsGuard are owned by 100 Perecentfedup.com (100 Percent Fed Up, Rush Limbaugh Radio Fan page, Women For Trump and Fed Up Americans) with a combined estimated 2.5 million likes. Other legitimate conservative pages with massive reach include the wildly popular “The Gateway Pundit,” “Glenn Beck,” and “The Federalist.” Many of the names of the Facebook pages targeted by the self-appointed arbiter of truth, NewsGuard, had either “Trump” or “Conservative” in them.

Most of Occupy Democrat’s multiple fact-check violations on Politifact’s website are considered “Half True, “Mostly False” or “Pants on  Fire.”

NewsGuard began their article by telling their readers they have given the “conservative news site” 100percentfedup.com a “red rating,” adding that they are “anonymously operated.”

In their first paragraph, they hilariously contradict themselves as they identify Patty McMurray as the “co-owner of the site 100PercentFedUp.com and the author of the article.”

Although to their credit, they did include the part of the email where I referred to them as a “shakedown organization,” they neglected to include the part about how I couldn’t wait for NewsGuard to threaten me again, so I could expose David Lepeska, who originally contacted us on behalf of NewsGuard on July 12, 2018.

Here’s the original email I received from the anti-Trump David Lepeska, who, according to him, was hired by NewsGuard, “a new service that reviews news and information websites for credibility and transparency.”

David Lepeska, like many of the so-called “fact-checkers” or researchers hired by “fact-check” organizations to determine for the public what is and what isn’t true, are nothing more than leftist activists.

NewGuard’s David Lepeska, who was tasked with researching our conservative, pro-Trump website, is hardly a politically neutral journalist.

Mr. Lepeska really doesn’t like President Trump, and his tweets and retweets prove it.

In a June 1 tweet by Lepeska, he posted a tweet by Melania Trump and claimed our First Lady is somehow “reaching out to us” for HELP! His tweet could easily be compared to a tweet by QAnon, a group Twitter refers to as a dangerous “conspiracy group” and has banned from their platform. But it’s okay with Twitter when “journalists” working for NewsGuard make incredible conspiracy claims about Melania Trump?

It seems that an employee of a so-called neutral “fact-checking” organization would celebrate a new crop of journalists who are “gunning” for our president. Finally, in another screenshot of a tweet by Lepeska (we have over 100 more), Lepeska posts a quote from a Breitbart article that states, “Still Rising”: Rasmussen Poll Shows Donald Trump Approval Ratings Now At 51%. The NewsGuard researcher warns Americans that they’re “looking down the barrel of 8 years of Trump,” telling them they need to “Step it up.”

Step it up??? Is that part of Lepeska’s role at NewsGuard to step up the activist fact-checkers’ efforts to discredit conservative news sites?

Editorial Editor of NewsGuard Eric Effron isn’t exactly a neutral player in the game of politics either.

On Oct 10, 2018, Eric Effron tweeted a fake news story from The Atlantic about a mystery Russian server connected to the Trump campaign. The story was completely debunked. Near the end of his article in The Atlantic, tweeted by the Editorial Editor of NewsGuard, the author, Franklin Foer, justifies pursuing his fantasy of catching Trump in a Russian scandal: On Nov 3, 2018, only days before the election, Effron tweeted a link from an anti-Donald Trump Jr. article by CNN, one of America’s most dishonest forms of “media.” Effron copied and pasted their idiotic headline along with the link.

If there’s one thing we’ve learned over the past 9 years, social media is a powerful tool, it can be used to silence the opposition, and it can also be used to reveal the true identity of your opposition, including third-rate “fact check” organizations posing as legitimate arbiters of truth.