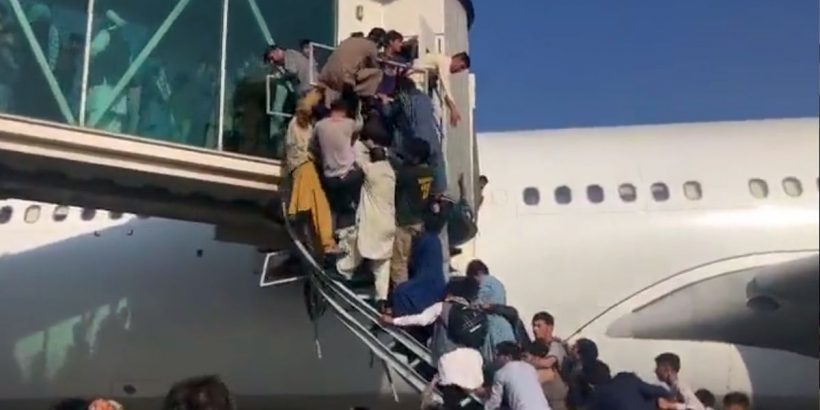 Three Democrat-led Senate committees are demanding answers on the Biden administration’s handling of the withdrawal of U.S. troops from Afghanistan after the country’s capital, Kabul, was taken unopposed by the Taliban terrorist group on Sunday.

Leaders of the Senate’s Intelligence, Foreign Relations and Armed Services committees issued statements this week as officials work to evacuate thousands of U.S. citizens and Afghan allies from the country following the Taliban takeover.

President Joe Biden in a speech on Monday defended his decision to withdraw U.S. troops from Afghanistan. He admitted, however, that the Afghan government fell more quickly than expected, suggesting that they lacked a fighting spirit.

In a statement on Tuesday, Sen. Bob Menendez, Democratic chairman of the Senate Foreign Relations Committee, expressed his frustration over the events unfolding in Afghanistan, and vowed to hold a hearing on U.S. policy toward the country.

“The events of recent days have been the culmination of a series of mistakes made by Republican and Democratic administrations over the past 20 years,” Menendez said. “We are now witnessing the horrifying result of many years of policy and intelligence failures.”

The committee would also investigate negotiations between the Trump administration and the Taliban, as well as Biden’s “flawed execution of the U.S. withdrawal,” Menendez said. The senator didn’t announce the date of the hearing.

“To see this army dissolve so quickly after billions of dollars in U.S. support is astounding,” Menendez added.

“The American and Afghan people clearly have not been told the truth about the ANDSF’s capacity and deserve answers,” he said, referring to the Afghan National Defense and Security Forces.

Former President Donald Trump signed a deal with the Taliban in February 2020 to withdraw U.S. troops by May 1 in exchange for the Taliban not attacking U.S. troops and their cutting ties with al-Qaeda. However, in April, Biden announced revised plans to withdraw all American forces from the country by Sept. 11.

Sen. Mark Warner (D-Va.), chairman of the Intelligence Committee, said he and other Senate panels would work together to “ask tough but necessary questions about why we weren’t better prepared for a worst-case scenario involving such a swift and total collapse of the Afghan government and security forces.”

Sen. Ted Cruz (R-Texas), member of the Senate Foreign Relations Committee, previously criticized the president in a statement on Friday for tearing up the former Trump administration’s efforts to negotiate a timed withdrawal with “extensive support from regional actors.”

“In Afghanistan, President Biden said he was putting his ‘trust’ in ‘the capacity of the Afghan military,’ and the result has been, again, an embarrassing spectacle, a diplomatic humiliation, and a national security catastrophe,” Cruz added.

The president on Saturday authorized some 6,000 additional combat troops to assist with evacuation efforts and promised a “swift and forceful” response if the Taliban attacks U.S. troops or disrupts their evacuation operations.

“We will defend our people with devastating force if necessary,” he said.

The Epoch Times has contacted the Biden administration for comment.