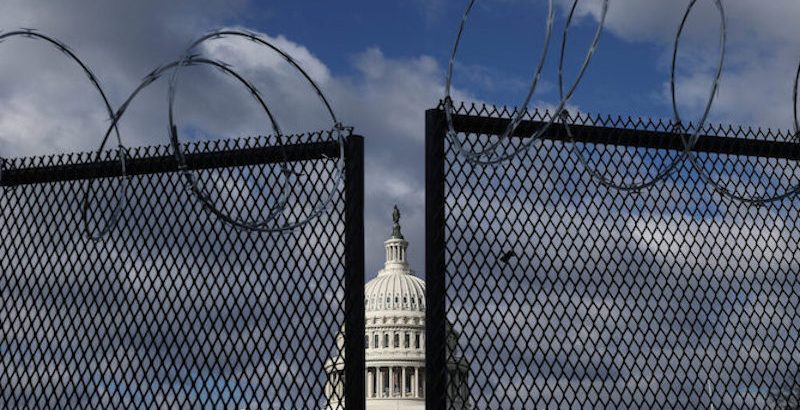 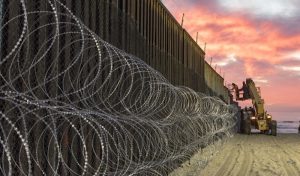 During former President Trump’s first term, he was severely criticized for enforcing the 450 mile wall along the Mexican border, yet the razor wire surrounding the Capitol Building oddly resembles its counterpart on the Southern border. Both fences were said to keep people out.  Does this display a note hypocrisy?

Do our new leaders feel the need to protect themselves from the very people who voted them in… unless we didn’t?

Now, Speaker Pelosi has been asked to see that the Capitol fence is removed. Will she do it?

Republicans Call on Pelosi to Remove ‘Military-Style Fencing’ Around Capitol

Forty-two House Republicans have sent a letter to House Speaker Nancy Pelosi (D-Calif.) urging her to remove the barricades surrounding the Capitol in Washington, erected in the days after the building was stormed on Jan. 6.

Rep. Ted Budd (R-N.C.), the primary signatory of the letter (pdf), said in a statement that the request is for Pelosi to remove what some fear is poised to become “permanent military-style fencing around the Capitol.”

The undersigned representatives said they are concerned about the presence of “enhanced fencing” surrounding the Capitol even though the presidential inauguration and related high profile events that led to its erection have since passed.

“In particular, we are concerned with recent reports that the fencing surrounding the Capitol may become permanent,” they wrote.

“We are willing to have an honest debate about providing Capitol Hill Police with the resources they need to be better prepared without turning the Capitol into a permanent fortress,” they wrote, and urged Pelosi to take down the barbed wire fencing and send the National Guard troops home.

“It’s time for healing and it’s time for the removal of the fencing so the nation may move forward,” they said in the letter.

Calling the events that happened on Jan. 6 “horrific,” the lawmakers expressed understanding for why enhanced security was adopted in their wake.

“But it is time for Congress and its representatives to stop hiding,” they wrote.

Calling the Capitol a “symbol of freedom both at home and abroad,” the lawmakers argued the “fortress-like security” sends the wrong message.

“At the top of the Capitol building stands the Statue of Freedom,” they wrote. “Much like the Statue of Liberty in New York City, the statue symbolizes why so many people from around the world come to America. They come to start anew, unshackled by tyranny and oppression, to be free from political and religious persecution, and to live in freedom and peace. The current state of the Capitol Complex fundamentally undermines that message, and we urge an end to it,” they said in the letter.

In January, the Capitol police force’s acting chief said permanent fences around the Capitol complex should be part of the “vast improvements” in security needed to protect the building and the lawmakers who work inside.

This drew the ire of members of Congress on both sides of the aisle, along with local lawmakers and neighborhood residents.

“DC does not support it,” said Councilmember Charles Allen, whose district includes the Capitol Hill neighborhood.

Rep. Jennifer Wexton (D-Va.) said on Twitter, “I believe we can keep Members, press, staff, my constituents, and all those who work here safe without walling off the symbol of our democracy. It’s the People’s House—let’s keep it that way.”

A petition being circulated online against making permanent the temporary fencing around the Capitol had roughly 9,000 signatures by mid-afternoon Friday. “Visitors and residents of DC would be punished by a permanent fence, a permanent scar on our beautiful city, and would lose access to this beautiful beacon of democracy,” the petition reads.

The grounds of the Capitol attract crowds for public events, daily exercise, as well as rest and relaxation.