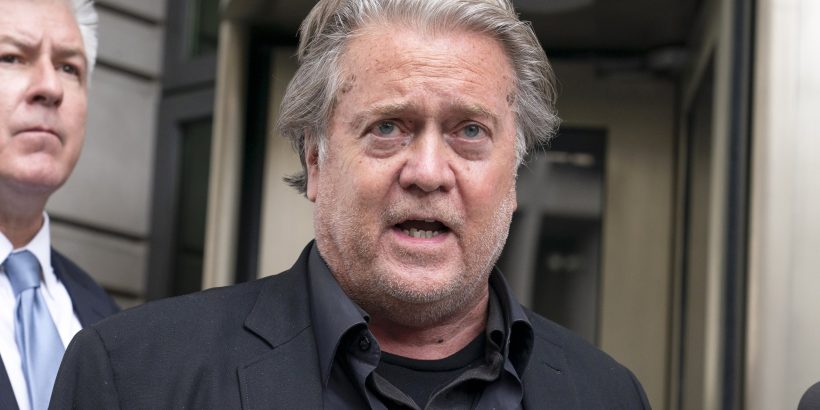 WASHINGTON—Former White House strategist Steve Bannon has been found guilty of contempt of Congress by a jury in Washington.

Jurors convicted Bannon, who worked in the Trump administration, on two counts.

Bannon faces up to two years in prison. Sentencing will take place on Oct. 21.

Before Bannon’s trial, the last criminal contempt of Congress case took place in 1983, according to the Congressional Research Service.

Bannon chose not to testify in his own defense. Prosecutors called just two witnesses, an FBI agent and Kristen Amerling, a lawyer for the House of Representatives panel investigating the Jan. 6, 2021, breach of the U.S. Capitol.

Bannon told reporters outside the courthouse that he respected the jury’s decision.

“We may have lost a battle here today but we’re not going to lose the war,” he added.

The case stemmed from Bannon’s refusal to comply with a subpoena demanding documents and testimony. The subpoena was issued by the House panel.

Panel members alleged that Bannon has information that would help their investigation.

Bannon offered to comply once the question of executive privilege, which had been asserted by former President Donald Trump, was resolved.

Bannon was indicted in late 2021, several weeks after the House voted to hold him in contempt.

In closing arguments, prosecutors said the evidence was clear that Bannon failed to comply with a lawful subpoena.

“This case is not complicated, but it is important. This is a simple case about a man—that man, Steve Bannon—who didn’t show up. Why didn’t he show up? He didn’t want to provide the January 6 committee with documents, didn’t want to recognize the government’s authority,” Molly Gaston, one of the prosecutors, told the jury. “Why is this important? Government only works if people show up, play by the rules, and are held accountable when they do not.”

Evan Corcoran, a lawyer representing Bannon, said that there’s no evidence Bannon was connected to the breach and that his client was in negotiations to appear before the panel before the contempt vote. He also questioned whether Rep. Bennie Thompson (D-Miss.), chairman of the panel, had signed the subpoena.

David Schoen, another Bannon lawyer, said that the case is a “bulletproof appeal.”

“You will see this case reversed on appeal,” he said.

Prosecutors overreached by not taking into account why Bannon didn’t comply, which stemmed from the privilege concerns, according to Schoen.

“When a former president or a current president invokes executive privilege, it’s presumptively valid. Period,” he said. “It’s not for Congress to decide it’s not valid.”