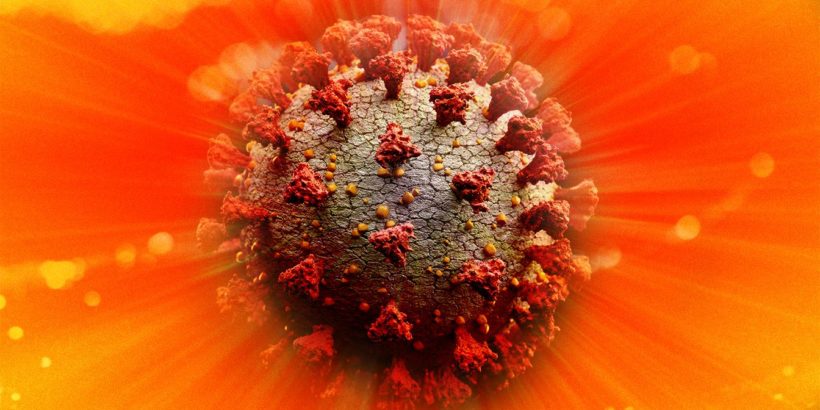 Will Gates and Fauci’s Pounding Drums of ‘Peril Until Vaccinations’ Fall Silent?

For weeks now, we’ve been hearing Dr Fauci warn of what might happen if we all come out of our homes and get back to life too soon. Many states have even gone so far as to ban outdoor activities like surfing, hiking and fishing. All the while we’ve heard the vaccine narrative running like a strong current through it all.

Q has asked us to consider the possibility that cures ALREADY exist. (These people are SICK!)

What might Trump and the Patriots know? I think the Deep State narrative might be on the brink of public defeat…. as we await the next plot twist in this show!

Pass the sunscreen, please? Bring on the summer sun-lit fun!

The CCP virus appears to weaken or die more readily when exposed to increasing amounts of sunlight, heat, or humidity, a U.S. Department of Homeland Security (DHS) official said.

William Bryan, the acting undersecretary of the science and technology for the DHS, said that government researchers have so far found that the virus survives best in indoor and dry conditions, and is less able to survive in hotter, more humid conditions.
Citing emerging government test results, Bryan singled out sunlight as a powerful factor in killing the CCP (Chinese Communist Party) virus, also known as the novel coronavirus.

“Our most striking observation today is the powerful effect that solar light appears to have on killing the virus—both on surfaces and in the air,” Bryan said at the White House Coronavirus Task Force briefing on Thursday. “We’ve seen a similar effect with both temperature and humidity as well, where increasing the temperature or the humidity or both is generally less favorable to the virus.”
“The virus dies quickest in the presence of direct sunlight,” he later said.

Bryan told reporters that while summer is approaching, “it would be irresponsible for us to say that we feel that the summer will totally kill the virus and that it will be a free-for-all.” He encouraged Americans to continue to adhere to the White House’ guidelines on the CCP virus.

A report was leaked to Yahoo News on April 18 attributed to the DHS Science and Technology Directorate. The report said that “sunlight destroys the virus quickly.” At the time, a DHS spokesman told The Epoch Times that “it would be irresponsible to speculate, draw conclusions, or to inadvertently try to influence the public based upon a document that has not yet been peer-reviewed or subjected to the rigorous scientific validation approach.” 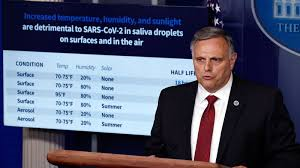 Practical Applications:
At the news briefing on Thursday, Bryan shared research results headlined, “Increased temperature, humidity, and sunlight are detrimental to SARS-CoV-2 in saliva droplets on surfaces and in the air.”
The results come from tests that the DHS has been carrying out at the National Biodefense Analysis and Countermeasures Center, a government biodefense research laboratory in Frederick, Maryland.

For aerosol-type conditions, such as when people cough or sneeze, the virus has a half-life of about an hour in dark, low-humidity conditions. Adding direct sunlight, however, decreases the virus’s half-life to one and a half minutes.

Bryan said that while there are “many unknown links in the COVID-19 transmission chain,” the trends observed so far can support practical decision-making to curb the spread of the CCP virus.”
Some practical applications include “increasing the temperature and humidity of potentially contaminated indoor spaces” to reduce the stability of the virus, and taking extra care for drier environments that don’t have sunlight, Bryan said. 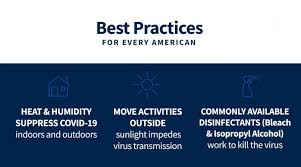 Researchers have also found that bleach and isopropyl alcohol can kill the virus, with bleach taking about five minutes and isopropyl alcohol taking about 30 seconds, he said.
“And that’s with no manipulation—no rubbing—just spray it on and leaving it; you rub it, and it [the virus] goes away even faster,” Bryan said of the disinfectants’ application on the virus. The researchers are also experimenting with the effects of other disinfectants on the virus, Bryan added.

President Donald Trump said on Thursday at the briefing that his administration may extend its national social distancing guidelines until early in the summer or later. The guidelines—first shared in mid-March have already been extended once and will last until April 30 at the earliest.

At least sixteen U.S. states have released plans to lift movement restrictions and reopen for business. The Trump administration is coordinating efforts between the Centers for Disease Control and Prevention (CDC) and local governments to dramatically increase the capacity for contact tracing.
More than 874,000 people in the United States are confirmed to have been infected, and over 49,600 have died due to the CCP virus.