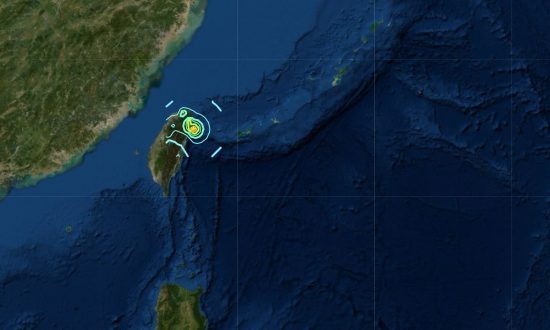 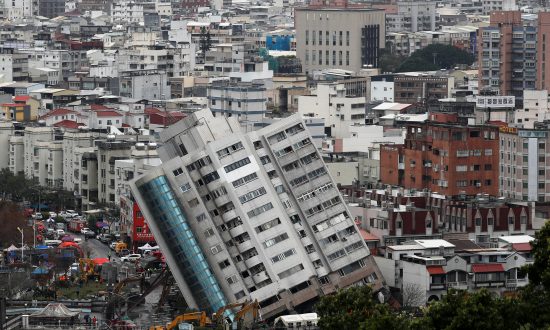 TAIPEI, Taiwan—A powerful typhoon was expected to hit Taiwan on Aug. 8, bringing the risk of landslides and high seas, according to weather forecasters, just hours after a magnitude-6.0 earthquake struck the island.

Typhoon Lekima, categorized at the strongest typhoon level by Taiwan’s weather bureau, was expected to approach the island’s northeastern coast. It was moving in a north-northwesterly direction at 9 miles per hour, weather officials said.

Lekima had maximum winds of 141 mph as it approached Taiwan, the weather bureau said.

The bureau issued wind and rain warnings for greater Taipei, the northern port city of Keelung, and other northern counties. It also put out a warning to seafarers off the south and east coasts.

A 6.0-magnitude earthquake struck off Taiwan’s northeastern coast on Aug. 8, the island’s weather bureau said, rattling buildings and cutting power to thousands of buildings. A Reuters witness said the shallow quake shook buildings in the capital, Taipei. The quake, which was centered near the northeastern county of Yilan, had a depth of 13 miles.

“An earthquake struck when we were making preparations for the typhoon, which is a rare event,” Premier Su Tseng-chang told a meeting at a national emergency center, urging authorities to stay on alert as the storm approaches.

The earthquake cut power to more than 10,000 buildings and forced the suspension of regional railway service in northern Taiwan; a woman was killed by a falling wardrobe. There were also reports of gas and water leaks.

Taiwan, a self-ruled island that China considers a renegade province, lies near the junction of two tectonic plates and is prone to earthquakes.

More than 100 people were killed in a quake in southern Taiwan in 2016, and some Taiwanese remain scarred by a 7.6-magnitude quake that killed more than 2,000 people in 1999.

More than 1,500 people were evacuated to safety, most of them tourists on islands off its east coast, while troops were deployed in some areas amid fears of floods.

The storm is expected to proceed to China, approaching the eastern city of Shanghai over the weekend, the weather bureau said.

Typhoons regularly hit Taiwan, China, the Philippines, and Japan in the second half of the year, gathering strength from the warm waters of the Pacific Ocean or South China Sea before weakening over land.

Typhoon Morakot devastated the island in 2009, killing nearly 700 people, most of them in landslides.

Turn your phone into a beacon of freedom and independent news. Download The Epoch Times app.