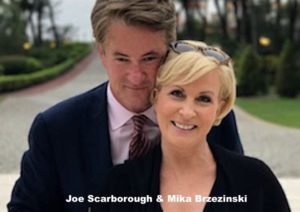 In 2001, Lori Klausutis a young intern for ‘Morning Joe,’ Joe Scarborough, was killed. President Trump recently tweeted the story calling it a ‘cold case,’ and Mika Brzezinski flipped out calling for President Trumps twitter account be deleted. Now we know, President Trump brought this up for a reason. Earlier, her husband, Joe was on the Don Imus radio show joking about having sex with the intern then killing her. Seriously?

Apparently, Mika doesn’t believe in journalism in the true sense of the word. It’s ok for her to give her opinion, but when Donald Trump gives it, it’s not ok? She was caught on camera saying, “He [Trump] could have undermined the messaging so much that he can actually control exactly what people think, and that is our job.”  Actually, the job of the media is to report facts, not control what people think. Could there be a reason the stations call it ‘programming?’ Brzezinski has written three books, all of which were published by ‘Weinstein Books.’

The media has been doing everything possible to avoid promoting alternative coronavirus cures. They push the lock-down, mask-wearing and the idea HCQ will kill you.  When the people learn that HCQ cures many ailments including coronavirus, and the media has silenced all these doctors from speaking the truth, most likely many lawsuits will be filed. They are going to be brought into all of this because they were complicit with these treasonous DS people.

President Trump has set them up and has been exposing their corruption. The military hands out 42,000 doses of FDA approved HCQ, every day. Why is the media telling us not to take it even though the President and doctors admit to taking it?

HCQ has been given to more than 40,000 healthcare workers in the UK who have been in contact with Covid patients. It has recently been coated RED. Red-pilling just got a whole new meaning! Why are so many journalists so bent on instilling fear? Remember, HCQ has been on the market for decades.

FaceBook, Twitter and other social media platforms have taken down posts about HCQ. They should never be judge and jury in regard to our health. Social media took posts down because it didn’t fit their narrative, the media created fear saying HCQ will kill you. This is incorrect information. What if we all rose up and sued all these companies for giving incorrect information regarding our health? They might think twice about censorship.

The Deep State is cracking down.They are going to great lengths to keep our businesses closed. Business owners are being harassed by cops, by CPS, by the health department and sabotage with even one church being burned to the ground.

A 3-panel judge has been put in place to review the Flynn case. Flynn’s lawyers the Appeals Court asked for dismissal of Judge Sullivan claiming he is biased against Flynn.  If these judges follow the rule of law, it will easily be dismissed.

Stuffing ballot boxes seems to be a trait of the DS. Democrats paid Pennsylvania election officials to stuff ballot boxes. A former Judge of elections in Philadelphia, Pennsylvania, has been charged and pleaded guilty to illegally adding votes for Democrat candidates in judicial races in 2014, 2015, and 2016.

The Senate just confirmed John Ratcliffe (R) as the next Director of National Intelligence (DNI). The Senate was the key. Ric Grenell was terrific in this role due to the declassification he did. Ratcliffe is on deck. The DS is panicked.

Everything is in place. Biden-gate, Obama-gate, treason, and all who knowingly protected these people are all being exposed. The swamp is deep and the swamp is wide, but the Patriots are still in control!