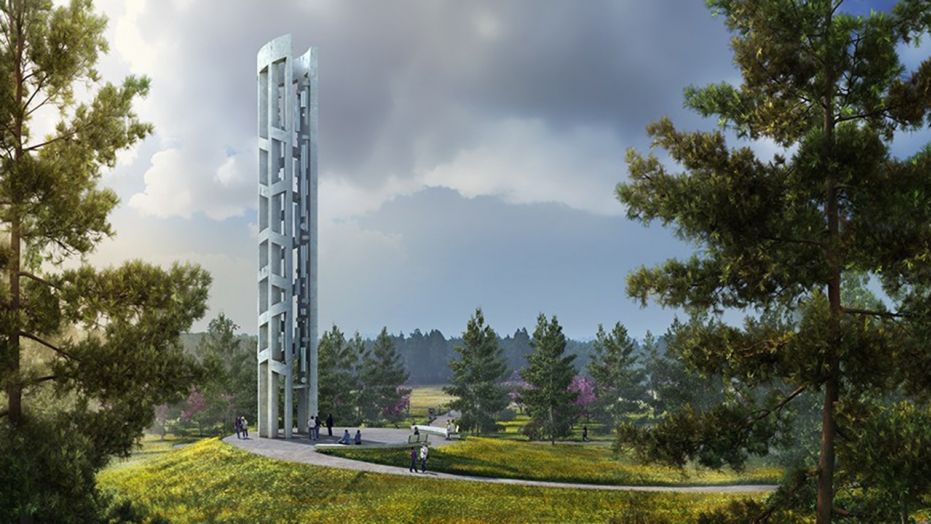 This week marks 17 years since the 9/11 terror attacks, and in memory of the 40 lives lost aboard United Flight 93 – which crashed into an open field in Shanksville, Pa. – a one-of-its-kind memorial has been erected in Somerset County.

Called the “Tower of Voices” and located at the already-existing Flight 93 Memorial, the $6 million project – financed by the National Park Foundation – stands at around 93 feet tall and is the embodiment of a musical instrument holding 40 wind chimes, honoring the 40 victims.

According to the U.S National Park Service, the “intent is to create a set of 40 tones that can signify through consonance the serenity and nobility of the site while also through dissonance recalling the event that consecrated the site.”

“The Tower of Voices serves as both a visual and audible reminder of the heroism of the 40 passengers and crew. There are no other chime structures like this in the world. The shape and orientation of the tower are designed to optimize air flow through the tower walls to reach the interior chime chamber,” the Park Service states. “The chime system is designed using music theory to identify a mathematically developed range of frequencies needed to produce a distinct musical note associated with each chime.”

Moreover, the “C” shape of the tower enables sound to echo externally from the open side in a fan-shaped arrangement. The chimes are wind activated and have internal strikers attached to sails protruding from the base of each chime.

“It’s the first visible memorial feature that you see as you enter, so it’s like a welcoming beacon or a landmark that introduces the memorial to the visitors,” architect Paul Murdoch told reporters ahead of Sunday’s dedication ceremony. “It’s not just an emotional memorial for those of us who have lived through it, especially those who lost ones, but something that needs to be here to tell the story of what happened.”

Murdoch’s design was selected from more than 1,100 applications and construction began last year. The Tower of Voices is the last sizable addition to the ever-flourishing memorial, and is situated at the entrance as the first visible feature to welcome visitors inside.

“Those 40 heroes that rose up to fight the terrorists that morning, that’s a critical part of the story,” added Gordon Felt, president of Families of Flight 93. “The choice that they made not to sit back and allow others to dictate the terms on how their lives would end.”

Hollie McKay has been a FoxNews.com staff reporter since 2007. She has reported extensively from the Middle East on the rise and fall of terrorist groups such as ISIS in Iraq. Follow her on twitter at @holliesmckay