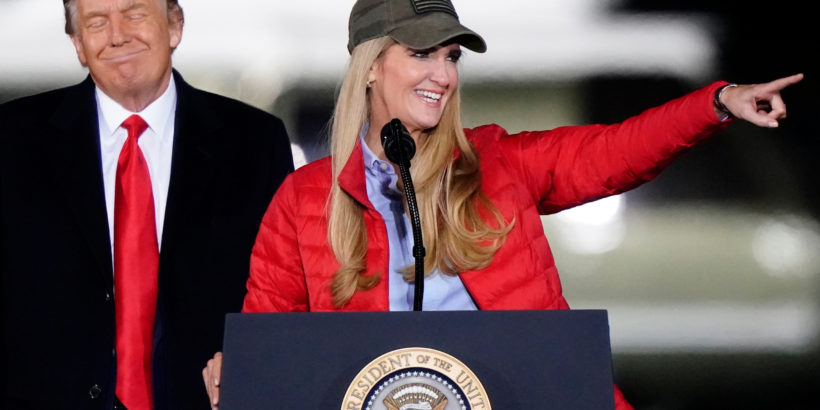 President Donald Trump intends to continue pursuing challenges to the outcome of the 2020 election in as many as eight states regardless of the result of the joint session of Congress on Jan. 6, when lawmakers will vet and count Electoral College votes.

During a Jan. 4 rally at an airfield in Dalton, Georgia, the president told a crowd of thousands of supporters to expect more news about the challenges to the election over the next two weeks.

“That was a rigged election, but we’re still fighting it and you’ll see what’s going to happen.

“You can lose and that’s acceptable. You lose, you lose … but when you win in a landslide and they steal it and it’s rigged, it’s not acceptable.”

Trump later said he’ll be in Georgia to campaign against Republican Gov. Brian Kemp and Secretary of State Brad Raffensperger “in about a year and a half,” which suggests that the president views the post-election challenge as a long-term battle. Kemp and Raffensperger, who certified former Vice President Joe Biden as the winner of the election in the Peach State, both have been largely uncooperative with Trump’s requests to audit the election.

Most recently, they objected to a signature audit in Fulton County, the state’s most populous county, according to Trump.

The president was in Georgia to drum up support for Sen. Kelly Loeffler and Senate candidate David Perdue for the runoff election set to conclude on Jan. 5. While Loeffler and Perdue have both committed to objecting to slates of Biden electors from disputed states during the joint congressional session on Jan. 6, it’s unclear if either will participate, since the results of the runoff elections may not be known for days.

The importance of the joint session has continued to grow as dozens of lawsuits by Trump’s legal team and a handful of third parties have been dismissed by courts in Georgia, Pennsylvania, Michigan, Wisconsin, Arizona, and Nevada. Only a handful of the cases featured evidentiary hearings, while the vast majority were dismissed on procedural grounds.

Trump added a layer of significance to the events on Jan. 6 by issuing an unprecedented call for supporters to descend on Washington that day for a “big” and “wild” protest. Some of the organizers believe the event may turn into the biggest Trump rally in history.

More than 100 members of the U.S. House of Representatives have committed to objecting to slates of Biden electors on Jan. 6, according to White House chief of staff Mark Meadows. At least 74 have done so publicly, according to a tally by The Epoch Times. A group of 13 senators has committed to adding their names to the objections.

An objection to each slate of electors will trigger two hours of debate followed by a vote by each chamber on which slate should be counted. Republican electors in seven states have sent procedural electoral votes to Congress. Democrats have the majority in the House and enough Republican support in the Senate to certify the Biden electors.

‘I Hope Mike Pence Comes Through for Us’

Vice President Mike Pence, in his capacity as the president of the Senate, will lead the joint session set to begin at 1 p.m. on Jan. 6. While the Electoral Count Act restricts Pence’s role to the opening of the envelopes containing the Electoral College votes, some experts argue Pence has more options because the act could be unconstitutional.

“The Vice President has the power to reject fraudulently chosen electors,” Trump wrote on Twitter on Jan. 5.

“I hope Mike Pence comes through for us,” Trump said at the rally in Georgia the night before. “If he doesn’t come through, I won’t like him quite as much. No, Mike is a great guy. He’s a wonderful man and a smart man and a man that I like a lot. But he’s going to have a lot to say about it. You know one thing with him: you’re going to get straight shots. He’s going to call it straight.”

Pence has spent hours huddling with Trump, staff, and the Senate parliamentarian ahead of the Jan. 6 proceedings. People close to the vice president have stressed his respect for institutions and said they expect him to act in accordance with the law and follow the Constitution.

David McIntosh, president of the conservative Club for Growth and a friend of Pence, told The Associated Press: “I think he will approach this as a constitutionalist, basically, and say, ‘What’s my role in the Constitution as president of the Senate?’

“What he’ll do is allow anybody who is going to move to object to be heard, but then abide by what the majority of the Senate makes the outcome.”

Pence was in Georgia on Jan. 4 campaigning for Loeffler and Perdue. In a speech at Rock Springs Church in Milner, the vice president told the crowd that “we’ll have our day in Congress.” The vice president subsequently made an extensive appeal to faith, suggesting that he doesn’t view himself as being in a position to take an election-altering stand on Jan. 6.

‘He’s Just Such a Fighter’

“I think he’s just such a fighter,” Amy Hicks, a homemaker from Muscle Shoals, Alabama, told The Epoch Times. “While most Republican candidates, if they lost they wouldn’t fight for it, he’s not the typical person or politician, and he never has been in his four years in office.

“If they certify [Biden] tomorrow, Trump, I don’t think he’ll ever concede. He’ll just move on.”

Thousands of supporters walked for half an hour on a pitch dark rural road from the police checkpoint to the rally on the airfield at the Dalton Municipal Airport. The crowd broke into chants of “Four more years,” “Fight for Trump,” and “Stop the steal” throughout the president’s speech, suggesting that his supporters view the election as a done deal.

“It’s within his right to fight as long and hard as he can, based on our Constitution,” Glen Ruggiero, of Canton, Georgia, told The Epoch Times. “To just give up because you don’t want to divide a country, we’re already divided. To give up because you want a smooth transition, they can make a transition anytime.

“As long as he is following what’s been provided for him within the constitution from our founding fathers, I believe he should fight to the very end.”