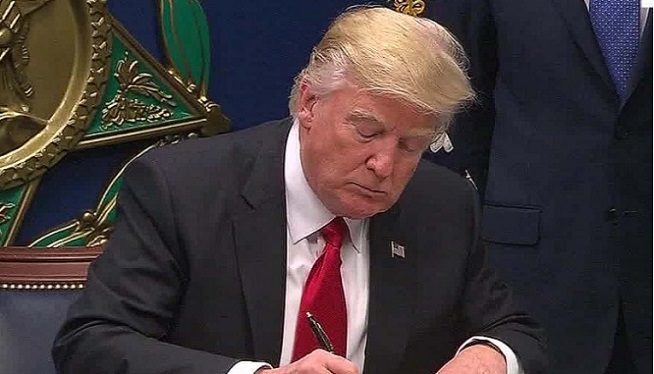 The move covers about 20 pages of the warrant obtained to monitor former Trump campaign adviser Carter Page and FBI interviews.

Trump’s directive caught intelligence agencies off-guard, and it remained unclear Monday whether national security professionals would have any opportunity to challenge any aspect of the decision.

ODNI spokesperson Kellie Wade said, “As requested by the White House, the ODNI is working expeditiously with our interagency partners to conduct a declassification review of the documents the President has identified for declassification.”

In a statement, a Justice Department spokesperson said, “When the President issues such an order, it triggers a declassification review process that is conducted by various agencies within the intelligence community, in conjunction with the White House Counsel, to seek to ensure the safety of America’s national security interests. The Department and the Federal Bureau of Investigation are already working with the Director of National Intelligence to comply with the President’s order.”

A U.S. official with direct knowledge told NBC News that the agencies would not be able to conduct a damage assessment on the text messages, because there are too many of them.

Rep. Adam Schiff, D.-Calif., the ranking member of the House Intelligence Committee, said he had been told the release of these materials could compromise intelligence sources and methods.

“President Trump, in a clear abuse of power, has decided to intervene in a pending law enforcement investigation by ordering the selective release of materials he believes are helpful to his defense team and thinks will advance a false narrative,” Schiff said in a statement.

The president has the authority to declassify any secret in the government, but experts could not recall a president doing so in a manner that seemed to leave aside any concerns raised by his own intelligence advisers.

“This is certainly unprecedented,” said Robert Litt, the former general counsel of the ODNI during the Obama administration.

“Between the compromise of sources and methods, the impact on the willingness of people to cooperate, and the potential of selective release of classified material for partisan purposes, I think intelligence officials will find it very troubling.”

Trump’s move was clearly aimed at fueling a theory that has simmered for months in right-wing media and on Trump’s Twitter feed: That the FBI’s investigation into Russian election meddling, which began in July 2016, was tainted by “corruption” from its very start.

Trump argues, wrongly, that the investigation began based on the information gathered by former British intelligence officer Christopher Steele, who created a so-called dossier.

In fact, American officials have said, the FBI Russia investigation began when a Trump aide, George Papadopoulos, bragged that a Russian agent told him the Russian government had thousands of Hillary Clinton’s emails.

On Sept. 13, one of the lawmakers who had requested the materials, Rep. Devin Nunes, the chairman of the House Intelligence Committee, gave a speech before a conservative group in which he said Democrats had “corrupted” the Justice Department and the FBI.

He hinted that the materials he sought could soon be declassified.

Parts of the Carter Page surveillance application were made public in July, but they were heavily redacted. It was an application to the highly secret Foreign Intelligence Surveillance Court, which grants secret national security surveillance warrants.

Nunes said that a “key to this election” is “what the other side did to dirty up a campaign…by corrupting the FBI and the DOJ…That is important for the American people to know, and we have to deliver that message going into October.”