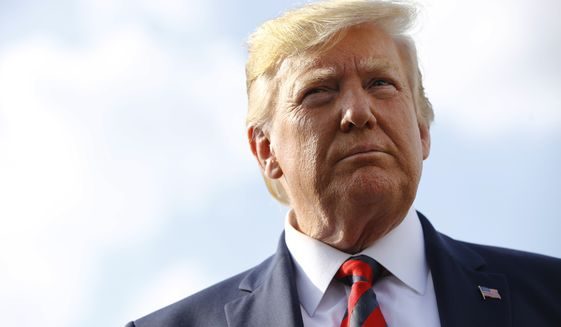 President Trump on Monday said Google tampered with as many as 16 million votes in the 2016 election and that the tech giant should be sued. 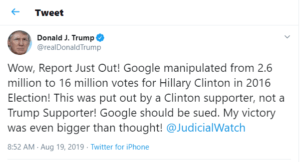 “Wow, Report Just Out! Google manipulated from 2.6 million to 16 million votes for Hillary Clinton in 2016 Election! This was put out by a Clinton supporter, not a Trump Supporter! Google should be sued. My victory was even bigger than thought!” President Trump tweeted.

While the president did not link to the report in question, he did tag conservative organization Judicial Watch in the tweet.

Judicial Watch and its president, Tom Fitton, have both recently tweeted about election integrity, but there have been no posts about that specific range of votes or Google’s involvement.

The low end of the range of numbers cited by Mr. Trump matches testimony from psychologist and commentator Dr. Robert Epstein, who told the Senate Judiciary Committee in June “biased search results generated by Google’s search algorithm likely impacted undecided voters in a way that gave at least 2.6 million votes to Hillary Clinton (whom I supported).”

However, Mr. Epstein made no mention of the 16 million figure cited by the president.

Google has dismissed Mr. Epstein’s research in the past as “nothing more than a poorly constructed conspiracy theory,” The Washington Post reported in 2017.

The president has said on multiple occasions that he didn’t win the popular vote against Democratic opponent Hillary Clinton because of voter fraud, but hasn’t provided evidence despite the Federal Elections Commission’s request.

Mr. Trump and some conservative media outlets have also accused Google of having an anti-Republican bias, a claim Google has denied.

By Bailey Vogt – The Washington Times