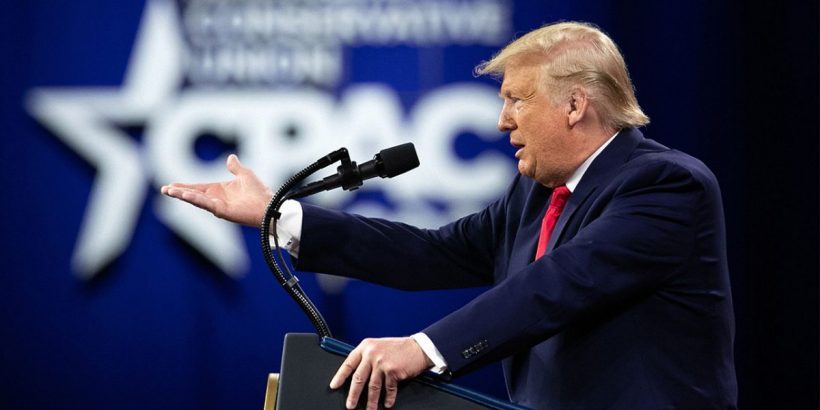 ORLANDO—In his first speech since leaving the White House, former President Donald Trump declared his America-first movement to be far from over, criticized the Biden administration, charted the course for the future of the Republican Party, and hinted that he may run for president again in 2024.

Speaking before an energized crowd at the annual Conservative Political Action Conference (CPAC), Trump said that President Joe Biden had the “most disastrous first month of any president in modern history.” Trump cautioned that Biden has followed a radical socialist path that could lead to communism.

“We will save and strengthen America, and we will fight the onslaught of radicalism, socialism, and indeed, it all leads to communism,” Trump said.

“We all knew that the Biden administration was going to be bad, but none of us imagined just how bad they would be, and how far left they would go.”

“Biden’s radical immigration policies aren’t just illegal—they are immoral, they are heartless, and they are a betrayal of our nation’s core values,” he said.

Trump projected that Biden’s immigration policies alone are enough for the Democrats to lose the White House in 2024. He then hinted at a potential run for the presidency.

“Who knows, I may even decide to beat them for a third time,” Trump said, prompting a loud ovation from the audience.

Trump called on Biden to reopen schools and accused the president of acting at the behest of teachers’ unions, which are resisting reopenings. He touted his administration’s successes in dealing with the CCP virus pandemic.

Trump addressed the rift in the Republican Party fueled by a small number of Republicans who voted in favor of impeachment and conviction before the Senate acquitted the former president. Trump named each Republican who voted against him by name.

“The Republican Party is united. The only division is between a handful of Washington, D.C., establishment political hacks, and everybody else all over the country,” Trump said.

The former president affirmed that he’s not interested in starting a third political party, saying that “we have the Republican Party.”

Trump’s remarks marked his first public appearance since he left the White House on Jan. 20. He was banned from Twitter and Facebook before he left office, compounding his absence from the limelight. The former president said, “the time has come to break up the big tech monopolies.”

Trump’s position as the leader of the conservative movement was clear throughout the four days of speeches and panels at CPAC, with the crowd often breaking into cheers when Trump’s name was mentioned. None of the speakers criticized the former president.

A straw poll taken at the conference showed that 95 percent of the attendees want Trump’s policies to be continued, and 97 percent approved of his performance in office. Trump also garnered more than twice the support of any other Republican candidate in a hypothetical 2024 presidential ballot. Florida Gov. Ron DeSantis received 21 percent of the vote compared to 55 percent who chose Trump.

Trump laid out the agenda for the Republican Party, identifying election integrity as one of the top priorities. He said the election was “rigged,” prompting a chant of “we won” from the crowd. He said the Supreme Court didn’t have the “courage” to take up the Texas election challenge.

The speech often resembled his signature rally addresses with a message akin to that of a campaign platform.

“We believe in standing up to China, shutting down outsourcing, bringing back our factories and supply chains, and ensuring that America, not China, dominates the future,” he said. “Companies that leave America to create jobs in China, and other countries that have ripped us off for years, should not be rewarded, they should be tariffed, fined, and punished.

“The future of the Republican Party is as a party that defends the social, economic, and cultural interests and values of working American families—of every race, every color, and every creed,” Trump said. “Republicans believe that the needs of everyday citizens must come first.”