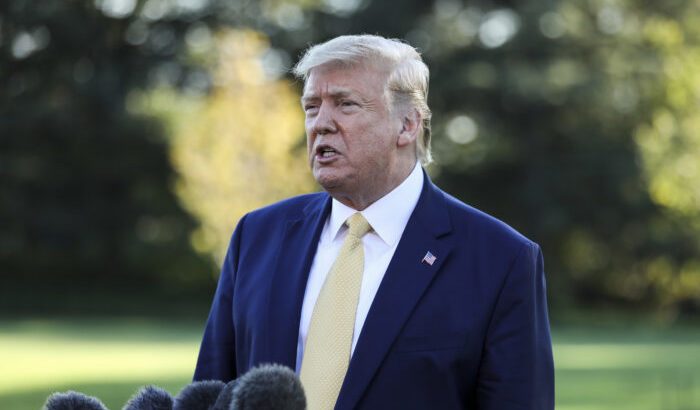 President Donald Trump likened the impeachment inquiry against him to a lynching, a description later defended by an administration official.

“So some day, if a Democrat becomes President and the Republicans win the House, even by a tiny margin, they can impeach the President, without due process or fairness or any legal rights,” Trump wrote in a statement on Twitter on Oct. 22.

“All Republicans must remember what they are witnessing here – a lynching. But we will WIN!”

Earlier in the morning, Trump referred to a poll showing responders in six battleground states opposing impeaching the president, 53 percent to 43 percent.

So some day, if a Democrat becomes President and the Republicans win the House, even by a tiny margin, they can impeach the President, without due process or fairness or any legal rights. All Republicans must remember what they are witnessing here – a lynching. But we will WIN!

“I thought a very revealing poll was done by The New York Times. By about a 10 point margin, those in battleground states polled are against impeaching the President, and if Nancy Pelosi doesn’t take note of that, maybe she is the third rate politician,” Trump wrote, quoting “Fox & Friends” anchor Brian Kilmeade.

Trump was criticized by a number of lawmakers for using the term “lynching,” with some claiming he was racist to use it.

“This is disgusting and wrong. This impeachment inquiry is a constitutional process you brought on by your actions. Lynchings are hate crimes and a dark stain on our nation’s history. Your inability to recognize the difference says a lot,” wrote Sen. Jeff Merkley (D-Ore.) in a statement.

Pressed on the use of the word, White House Principal Deputy Press Secretary Hogan Gidley told reporters outside the White House: “The president’s not comparing what’s happened to him with one of our darkest moments in American history. He’s just not. What he’s explaining clearly is the way he’s been treated by the media since he announced for president.”

“The word impeachment was used about this president the day he was elected and before he was even sworn into office. Let’s not talk about that. I understand there are many people in the media who don’t agree with his language. He has used many words to describe the way he has been relentlessly attacked,” he continued.