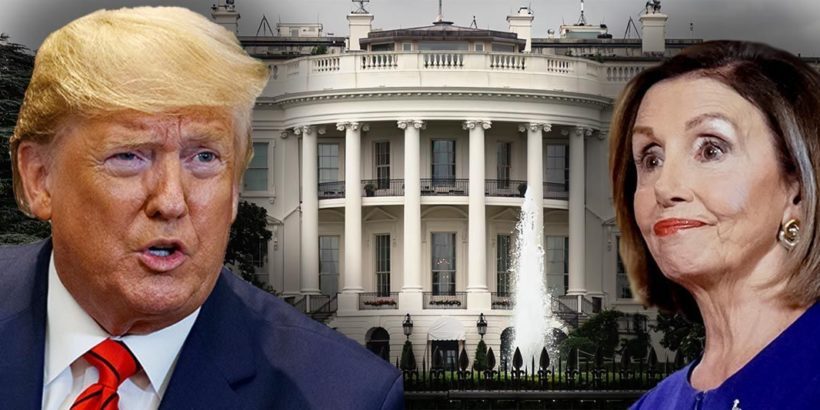 “You can’t impeach a president for doing a great job. This is a scam.”

The White House outlined in a defiant eight-page letter to House Speaker Nancy Pelosi and top Democrats on Tuesday why it will not participate in their “illegitimate and unconstitutional” impeachment inquiry, charging that the proceedings have run roughshod over congressional norms and the president’s due-process rights.

Trump administration officials called the letter, which was written by White House counsel Pat Cipollone and obtained by Fox News, perhaps the most historic letter the White House has sent. The document tees up a head-on collision with Democrats in Congress, who have fired off a slew of subpoenas in recent days concerning the president’s alleged effort to get Ukraine to investigate political foe Joe Biden during a July phone call with Ukraine’s leader.

“President Trump and his administration reject your baseless, unconstitutional efforts to overturn the democratic process,” the letter stated. “Your unprecedented actions have left the president with no choice. In order to fulfill his duties to the American people, the Constitution, the Executive Branch, and all future occupants of the Office of the Presidency, President Trump and his administration cannot participate in your partisan and unconstitutional inquiry under these circumstances.”

Substantively, the White House first noted in the letter that there has not been a formal vote in the House to open an impeachment inquiry — and that the news conference held by Pelosi last month was insufficient to commence the proceedings.

“In the history of our nation, the House of Representatives has never attempted to launch an impeachment inquiry against the president without a majority of the House taking political accountability for that decision by voting to authorize such a dramatic constitutional step,” the letter stated.

It continued: “Without waiting to see what was actually said on the call, a press conference was held announcing an ‘impeachment inquiry’ based on falsehoods and misinformation about the call.”

SCHIFF SAYS ‘WE’ DIDN’T TALK TO WHISTLEBLOWER — THEN BACKTRACKS

Despite Pelosi’s claim that there was no “House precedent that the whole House vote before proceeding with an impeachment inquiry,” several previous impeachment inquiries have been launched only by a full vote of the House — including the impeachment proceedings concerning former Presidents Andrew Johnson, Richard Nixon and Bill Clinton.

The letter went on to note that “information has recently come to light that the whistleblower” who first flagged Trump’s call with Ukraine’s president “had contact with [House Intelligence Committee] Chairman [Adam] Schiff’s office before filing the complaint.”

And Schiff’s “initial denial of such contact caused The Washington Post to conclude that Chairman Schiff “clearly made a statement that was false,” the letter observed.

Ken Dilanian  ✔@KenDilanianNBC
An aide says Schiff meant the full committee here. To me it seems like a deceptive answer.https://twitter.com/rncresearch/status/1179476466469396480 …
RNC Research

FLASHBACK: Adam Schiff lies, insists: “we have not spoken directly with the whistleblower”https://youtu.be/qOSF3qMieBA 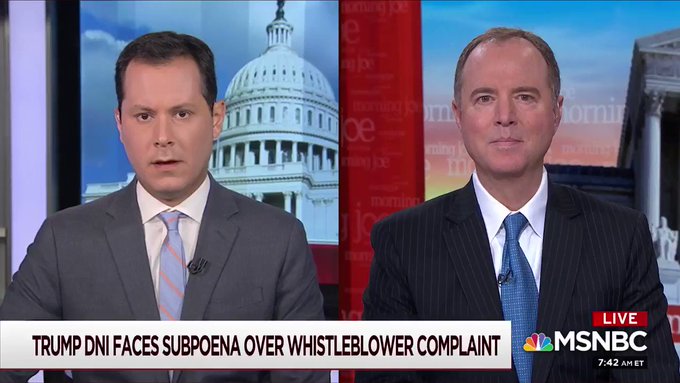 The letter added: “In any event, the American people understand that Chairman Schiff cannot covertly assist with the submission of a complaint, mislead the public about his involvement, read a counterfeit version of the call to the American people, and then pretend to sit in judgment as a neutral ‘investigator.'”

The White House was dinging Schiff for reciting a fictional version of Trump’s call with Ukraine’s leader during a congressional hearing. Schiff later called his statements a “parody.”

TUCKER CARLSON AND NEIL PATEL: THE TRUTH ABOUT IMPEACHMENT

“Perhaps the best evidence that there was no wrongdoing on the call is the fact that, after the actual record of the call was released, Chairman Schiff chose to concoct a false version of the call and to read his made-up transcript to the American people at a public hearing,” the letter stated. “The chairman’s action only further undermines the public’s confidence in the fairness of any inquiry before his committee.”

Ukraine’s president has said he felt Trump did nothing improper in their July call, and DOJ lawyers who reviewed the call said they found no laws had been broken. The White House released a transcript of the conversation last month, as well as the whistleblower’s complaint, which seemingly relied entirely on second-hand information.

Separately, the letter asserted multiple alleged violations of the president’s due-process rights. It noted that under current impeachment inquiry proceedings, Democrats were not allowing presidential or State Department counsel to be present.

Democrats’ procedures did not provide for the “disclosure of all evidence favorable to the president and all evidence bearing on the credibility of witnesses called to testify in the inquiry,” the letter noted, nor did the procedures afford the president “the right to see all evidence, to present evidence, to call witnesses, to have counsel present at all hearings, to cross-examine all witnesses, to make objections relating to the examination of witnesses or the admissibility of testimony and evidence, and to respond to evidence and testimony.”

Democrats also have not permitted Republicans in the minority to issue subpoenas, contradicting the “standard, bipartisan practice in all recent resolutions authorizing presidential impeachment inquiries.”

The letter claimed that House committees have “resorted to threats and intimidation against potential Executive Branch witnesses,” by raising the specter of obstruction of justice when administration employees seek to assert “long-established Executive Branch confidentiality interests and privileges in response to a request for a deposition.”

“Current and former State Department officials are duty bound to protect the confidentiality interests of the Executive Branch, and the Office of Legal Counsel has also recognized that it is unconstitutional to exclude agency counsel from participating in congressional depositions,” the letter stated.

Additionally, the letter noted that Democrats reportedly were planning to interview the whistleblower at the center of the impeachment inquiry at an undisclosed location — contrary, the White House said, to the constitutional notion of being able to confront one’s accuser.

According to a White House official, the bottom line was: “We are not participating in your illegitimate exercise. … If you are legitimately conducting oversight, let us know. But all indications are this is about impeachment.”

The document came as the White House aggressively has parried Democrats’ inquiry efforts. One of the administration’s first moves: the State Department on Tuesday barred Gordon Sondland, the U.S. ambassador to the European Union, from appearing before a House panel conducting the probe into Trump.

GOP INTRODUCES RESOLUTION TO KICK PELOSI OUT OF THE HOUSE

I would love to send Ambassador Sondland, a really good man and great American, to testify, but unfortunately he would be testifying before a totally compromised kangaroo court, where Republican’s rights have been taken away, and true facts are not allowed out for the public….

….to see. Importantly, Ambassador Sondland’s tweet, which few report, stated, “I believe you are incorrect about President Trump’s intentions. The President has been crystal clear: no quid pro quo’s of any kind.” That says it ALL!

The strategy risked further provoking Democrats in the impeachment probe, setting up court challenges and the potential for lawmakers to draw up an article of impeachment accusing Trump of obstructing their investigations. Schiff said Sondland’s no-show would be grounds for obstruction of justice and could give a preview of what some of the articles of impeachment against Trump would entail.

But, as lawmakers sought to amass ammunition to be used in an impeachment trial, the White House increasingly has signaled that all-out warfare was its best course of action.

“What they did to this country is unthinkable. It’s lucky that I’m the president. A lot of people said very few people could handle it. I sort of thrive on it,” Trump said Monday at the White House. “You can’t impeach a president for doing a great job. This is a scam.”

House Democrats, for their part, issued a new round of subpoenas on Monday, this time to Defense Secretary Mark Esper and acting White House budget director Russell Vought. Pelosi’s office also released an open letter signed by 90 former national security officials who served in administrations from both parties, voicing support for the whistleblower who raised concerns about Trump’s efforts to get Ukraine to look into Biden’s business dealings in Ukraine.

“A responsible whistleblower makes all Americans safer by ensuring that serious wrongdoing can be investigated and addressed, thus advancing the cause of national security to which we have devoted our careers,” they wrote. “Whatever one’s view of the matters discussed in the whistleblower’s complaint, all Americans should be united in demanding that all branches of our government and all outlets of our media protect this whistleblower and his or her identity. Simply put, he or she has done what our law demands; now he or she deserves our protection.”

The House Intelligence, Oversight and Foreign Affairs Committees were investigating Trump’s actions alleging he pressured Ukraine to investigate Biden and his son, potentially interfering in the 2020 election. The former vice president, for his part, has accused Trump of “frantically pushing flat-out lies, debunked conspiracy theories and smears against me.” And, Biden’s campaign has sought to have Trump attorney Rudy Giuliani, who has accused Biden of possible corruption, removed from the airwaves.

Biden has acknowledged on camera that in spring 2016, when he was vice president and spearheading the Obama administration’s Ukraine policy, he successfully pressured Ukraine to fire top prosecutor Viktor Shokin. At the time, Shokin was investigating Burisma Holdings — where Hunter had a lucrative role on the board despite limited relevant expertise. Critics have suggested Hunter Biden’s salary bought access to Biden.

The vice president threatened to withhold $1 billion in critical U.S. aid if Shokin, who was widely accused of corruption, was not fired.

“Well, son of a b—h, he got fired,” Biden joked at a panel two years after leaving office.

Fox News’ Catherine Herridge and The Associated Press contributed to this report.