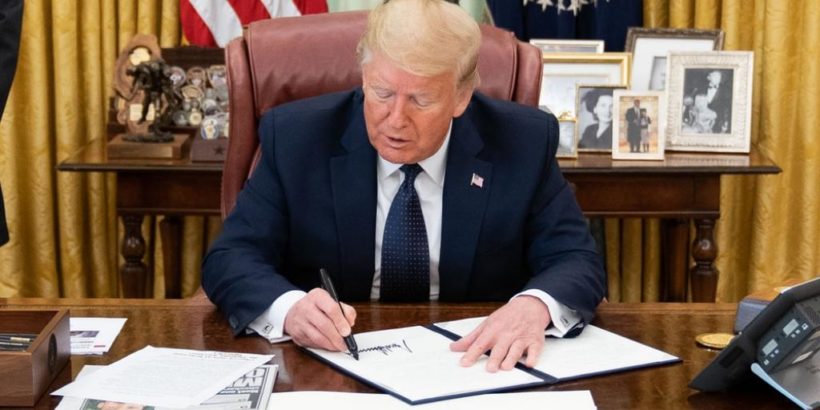 “What they’re doing is tantamount to monopoly, to taking over the airwaves.”  “Can’t let it happen. Or else we’re not gonna have a democracy.”

NOTE:  The following video and report was originally published on May 28, 2020

Flanked by Attorney General Bill Barr, President Trump signed an executive order in the Oval Office on Thursday that interprets Section 230 of the Communications Decency Act of 1996 (CDA) as not providing statutory liability protections for tech companies that engage in censorship and political conduct.

The president’s order, which also cuts federal funding for social media platforms that censor users’ political views, came just two days after Twitter took the unprecedented step of slapping a “misleading” warning label on two of Trump’s tweets concerning the fraud risks of nationwide mail-in balloting. The move immediately backfired: Experts disputed that Trump’s tweet was actually misleading, in part because mail-in balloting has been linked to ongoing fraud; Twitter’s fact-check itself contained false statements; and Twitter failed to apply the standard of review to other users.

“My executive order calls for new regulations under Section 230 of the Communications Decency Act to make it so that social media companies that engage in censoring any political conduct will not be able to keep their liability shield,” the president said.

He added: “My executive order further instructs the Federal Trade Commission (FTC) to prohibit social media companies from engaging in any deceptive acts or practices affecting commerce. This commerce resides in Section 5 of the Federal Trade Commission Act. … Additionally, I’m directing the attorney general to work cooperatively with the states … to enforce their own laws against such deceptive business practices. The states have broad and powerful authority to regulate in this arena.”

Under the CDA, platforms are ordinarily not liable for users’ defamatory or otherwise problematic posts, while publishers that actively shape and create content do face liability. (Copyright law, which has a strong constitutional foundation, ordinarily does require sites like Twitter to remove offending content, or face liability.) 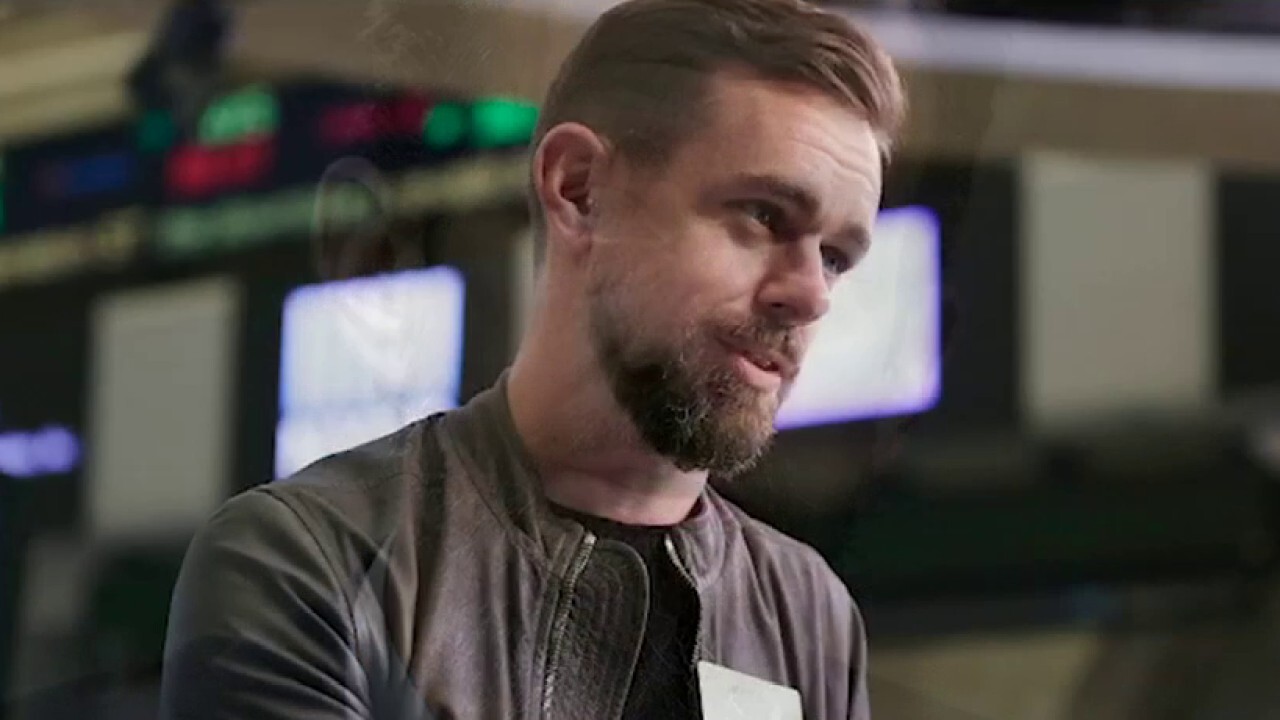 Although the “good faith” standard is ambiguous, UCLA law professor Eugene Volokh has noted that some case law suggests that “blocking material ostensibly because it’s offensive but really because it’s from your business rival might well be seen as being not in good faith,” while “blocking material that you really do think is offensive to many of your users (much like sexually themed or excessively violent or harassing material is offensive to many of your users) seems to be quite consistent with good faith.”

Trump’s order instructs the federal government to interpret and apply the CDA, as agencies typically do when laws give them that flexibility. “It is the policy of the United States that the scope of that immunity should be clarified: the immunity should not extend beyond its text and purpose to provide protection for those who purport to provide users a forum for free and open speech, but in reality use their power over a vital means of communication to engage in deceptive or pretextual actions stifling free and open debate by censoring certain viewpoints,” the order states.

Volokh, for his part, argued that while there could be an argument that providers act in “bad faith” when they remove content they don’t truly find objectionable, it would be a nonstarter to argue that removing “offensive” content necessarily transforms a platform into a publisher.

However, Trump made his position on the matter clear. “The choices that Twitter makes when it chooses to suppress, edit, blacklist, shadowban are editorial decisions, pure and simple,” Trump said. “In those moments Twitter ceases to be a neutral public platform and they become an editor with a viewpoint.” In its fact-check, Twitter added several paragraphs to Trump’s tweets.

Indeed, the executive order reads: “It is the policy of the United States to ensure that, to the maximum extent permissible under the law, this provision is not distorted to provide liability protection for online platforms that — far from acting in ‘good faith’ to remove objectionable content — instead engage in deceptive or pretextual actions (often contrary to their stated terms of service) to stifle viewpoints with which they disagree.”

“Section 230 was not intended to allow a handful of companies to grow into titans controlling vital avenues for our national discourse under the guise of promoting open forums for debate, and then to provide those behemoths blanket immunity when they use their power to censor content and silence viewpoints that they dislike,” the order adds.

“What they’re doing is tantamount to monopoly, to taking over the airwaves.”  — President Trump

The White House had discussed a social media executive order for the past several months, and lawmakers — including GOP Sens. Marco Rubio and Josh Hawley — have increasingly sought CDA reforms.

On Thursday, Trump pointed out that some Democrats agreed with him. Former Vice President Biden, in a January interview with The New York Times, said that Section 230 “should be revoked, immediately should be revoked” because Facebook “is propagating falsehoods they know to be false, and we should be setting standards not unlike the Europeans are doing relative to privacy.”

“As has been reported, Twitter seems never to have placed such a label on another politician’s tweet.  As recently as last week, Representative Adam Schiff was continuing to mislead his followers by peddling the long-disproved Russian Collusion Hoax, and Twitter did not flag those tweets,” Trump’s order reads.  “Unsurprisingly, its officer in charge of so-called ‘Site Integrity’ has flaunted his political bias in his own tweets.”

Also at the signing ceremony, Trump openly said he would “shut down” Twitter if he could legally. He also called out Facebook’s new oversight “tribunal” for hiring Pamela Karlan, the anti-Trump professor who testified at his impeachment hearing.

So ridiculous to see Twitter trying to make the case that Mail-In Ballots are not subject to FRAUD. How stupid, there are examples, & cases, all over the place. Our election process will become badly tainted & a laughingstock all over the World. Tell that to your hater @yoyoel

“What they’re doing is tantamount to monopoly, to taking over the airwaves,” Trump said. “Can’t let it happen. Or else we’re not gonna have a democracy.”

On Wednesday, however, the D.C. Circuit Court of Appeals handed Twitter and other tech giants an early win on the issue, finding that in the absence of state action, there can be no First Amendment violation.  The court also did not find a Sherman Antitrust Act violation, even though the plaintiffs alleged that big tech was conspiring to advance a left-wing agenda in restraint of commerce.

The president had teased the executive order Thursday morning, saying: “This will be a Big Day for Social Media and FAIRNESS!”

Fox News is told that, separately, the administration is working on a commission to look at alleged anti-conservative bias among big social media platforms.

Meanwhile, Republicans were waging a broad, all-out war against what they perceive as pervasive Silicon Valley bias. Several Republican lawmakers suggested on Thursday they will soon take action against Reddit, saying the influential Internet message board systematically singled out, censored, and destroyed a once-popular pro-Trump “subreddit,” or subforum, known as “r/The_Donald.”

Reid Hoffman, the co-founder of LinkedIn said he found out that telling someone you’re buying a house in New Zealand is “kind of a wink, wink, say no more,” when it comes to survivalism.

And, Vox reported on Wednesday that big tech billionares are fighting back against Republican efforts, in part because of Joe Biden’s struggling operation. The outlet said LinkedIn founder Reid Hoffman, Facebook co-founder Dustin Moskovitz, Laurene Powell Jobs, and ex-Google CEO Eric Schmidt were leading the charge — sometimes upsetting Democratic operatives, who had wanted to run their own operation.

Hoffman has been a big financial backer of MotiveAI, which has been linked to spreading overtly fake news. For example, The Daily Beast reported that four Colorado-based companies “associated with MotiveAI” used “50 seemingly independent Facebook pages to purchase ads in 2018” — including a page that suggested Brett Kavanaugh “had helped Bill and Hillary Clinton cover up the murder of a White House aide.”

Hoffman alone has also dumped approximately $10 million into Acronym, which backed the company Shadow — which, in turn, was behind the disastrous Iowa caucus app.

According to Vox, Acronym hopes to secure another $25 million “to set up seven of its own media properties in swing states, creating local news sites that portray moderate Democratic candidates in a favorable light, but appear to be objective, homespun outlets.”