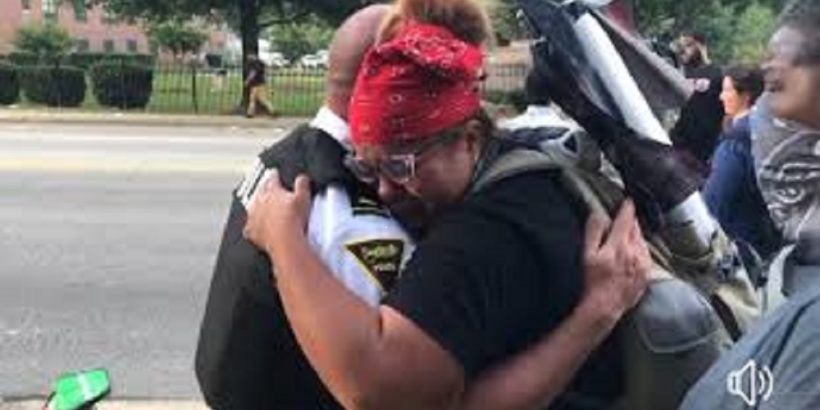 President Donald Trump and Attorney General William Barr on Monday spoke out against the “defund the police” movement, a multi-hued effort that in its extreme application proposes disbanding police departments entirely in favor of ill-defined alternatives.

Speaking at a meeting with law enforcement officials and officers at the White House, Trump praised police for the nation’s low crime numbers and acknowledged their service.

“There’s a reason for less crime. It’s because we have great law enforcement. I’m very proud of that,” Trump said, adding, “They protect people, risk their own lives for people they’ve never seen before—people, in many cases, they don’t know.”

The president sought to set the record straight on cases of misconduct by police, saying that the actions of several “bad actors” were limited in scope and should not taint the accomplishments of broader law enforcement structures.

“Our police have been letting us live in peace, and we want to make sure we don’t have any bad actors in there,” Trump said, adding that he believes “99 percent” of officers are “great people.

The president’s remarks about miscreants on the force come after weeks of protests, some of which have resulted in violent riots, following the police-custody death of George Floyd. All officers involved in Floyd’s death have been arrested and charged with crimes.

The incident has sparked outrage, which has fueled the movement to overhaul police procedures, including limiting legal protections for police, creating a national database of excessive-force encounters, and banning the use of chokeholds.

A rallying cry of some protesters and proponents of police reform is to “defund the police,” a multi-layered movement that ranges from calls to adjust police budgets to fund the establishment of complementary community-based solutions, to extreme proposals to disband police departments entirely.

Activist group MPD150 says on its website that it is gradually “working towards a police-free Minneapolis”, describing the concept as being about “strategically reallocating resources, funding, and responsibility away from police and toward community-based models of safety, support, and prevention.”

Rep. Karen Bass (D-Calif.), chairwoman of the Congressional Black Caucus, said part of the movement is really about how money is spent.

“Now, I don’t believe that you should disband police departments,” she said in an interview with CNN. “But I do think that, in cities, in states, we need to look at how we are spending the resources and invest more in our communities.”

“Maybe this is an opportunity to re-envision public safety,” she added.

Attorney General William Barr told Fox News in an interview Monday that he, too, opposes moves to defund the police.

“I think it’s the exact opposite of the way we should go,” Barr said, warning that disbanding police departments would lead to a spike in criminality.

He acknowledged the grievances of the black community but urged people not to use the “ghastly” actions of several bad actors, referring to the circumstances around Floyd’s death, to frame entire police structures as corrupt.

“I understand given the history of racial injustice in this country why the African American community, or at least some of it, would view the ghastly events in Minneapolis as manifestations of institutional racism in police departments,” Barr said.

“But I think, in fact, in the past 50 or 60 years, we’ve had a lot of reform of police departments,” Barr said, adding that compared to his previous tenure as Attorney General some 30 years ago, “I can tell you there’s a world of difference.”

“It’s the same with police officers. Every organization has individuals who engage in misconduct and we have to be very careful before we say ‘the whole organization is rotten,’” Barr added.

The Attorney General acknowledged there is “a crisis in policing,” but said cutting police budgets would only make things worse because this would make it harder to attract and retain talented and responsible staff.