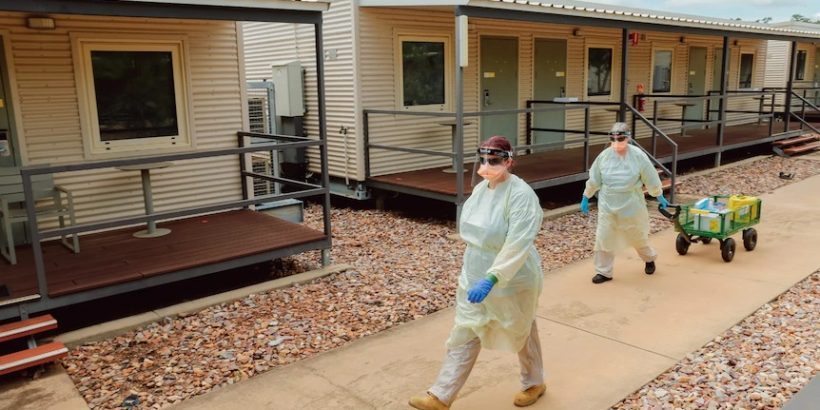 Australian authorities are removing COVID-19-positive patients and residents in the Northern Territory to a quarantine camp in Howard Springs, after nine cases were identified in the community of Binjari, according to a local official.

Hard lockdowns were implemented in Binjari and nearby Rockhole on Nov. 20, according to Northern Territory’s chief minister.

“Residents of Binjari and Rockhole no longer have the five reasons to leave their homes,” Chief Minister Michael Gunner said in a Facebook post dated Nov. 20. Australia’s five allowable reasons for people to leave their homes include going to work or school, buying food or supplies, exercising, caregiving, or getting vaccinated.

Officials have “identified five additional close contacts in Borroloola that had not previously been known to us. … They have all tested negative, and they are being transferred to Howard Springs,” he said.

Gunner said on Nov. 21 that eight people have been taken to a facility in Howard Springs, the Guardian reported.

“It’s highly likely that more residents will be transferred to Howard Springs today, either as positive cases or close contacts,” Gunner said. “We have already identified 38 close contacts from Binjari, but that number will go up. Those 38 are being transferred now.”

According to the Northern Territory government website, those who are taken to Howard Springs or the other quarantine camp, the Alice Springs Quarantine Facility, and “do not undergo a test, you will be required to remain in quarantine a further 10 days at your own expense.”

On Nov. 22, Police Commissioner and Territory Controller Jamie Chalker confirmed to news outlets that a 77-year-old man who was on an international repatriation flight died at the Howard Springs quarantine site over the weekend.

“He was an international repat. Obviously, he was a 77-year-old individual,” Chalker said, local media reported. “We’re just looking at whether they had any existing other issues, but certainly the initial advice is not indicating that it was a death relating to COVID.”

Over the weekend, thousands of people demonstrated in multiple Australian cities against vaccine mandates. About 85 percent of the eligible population is currently vaccinated as of Nov. 19.

In recent months, concerns have been raised about Australia’s federal and state governments’ COVID-19 emergency lockdowns and restrictions. For example, Melbourne has endured likely the longest lockdown in the world.

“There are concerns among parts of the community about some pandemic management legislation that the state government is currently trying to pass through the upper house of Parliament,” Melbourne-based journalist Dana Morse told Al Jazeera. “That bill has stalled, but people are concerned about the amount of power that the state government will have if the bill passes.”

Meanwhile, earlier this month, Australia reopened its borders to vaccinated travelers from New Zealand after having been shut for nearly 600 days. Prime Minister Scott Morrison said on Nov. 22 that Australia will allow foreign visa holders to enter the country in December.

Australia closed its international borders in May of last year and allowed only a restricted number of citizens and permanent residents to enter.