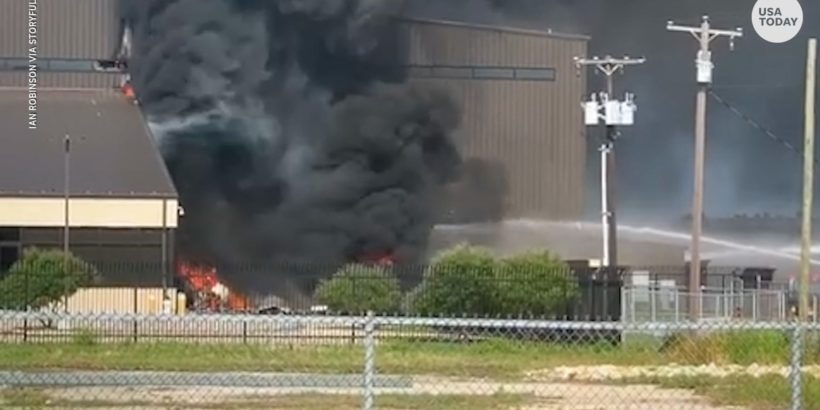 Updated at 6:25 a.m. Tuesday: Revised to reflect that two more passengers have been identified.

The day after a plane crashed after takeoff at Addison Airport, the list of the dead began to emerge: A family of four, a 28-year-old pilot, an executive of a prominent real estate firm and his wife.

As of early Tuesday morning, nine of the 10 people who were lost have been publicly identified.

Eight passengers and two crew members were on the twin-engine Beechcraft Super King Air 350 that was destroyed by flames after it crashed into a hangar at 9:11 a.m. Sunday as it departed for St. Petersburg, Fla.

The cause of the crash remains unknown.

Those killed are Brian and Ornella Ellard and her children, 15-year-old Alice Maritato and 13-year-old Dylan Maritato; Steve and Gina Thelen; John and Mary Titus; and Matthew Palmer, 28.

John Paul II High School in Plano sent a letter to families Monday identifying the Maritato children, as well as their mother and stepfather. The children are survived by their father, Michele Maritato.

Alice would have been a sophomore in the new school year, and Dylan was entering the eighth grade at Dallas’ All Saints Catholic School.

Ornella Ellard was an interior designer and Brian Ellard, 52, owned an art gallery and Mille Lire, an upscale Italian restaurant in the Centrum building on Oak Lawn Avenue in Dallas.

Mille Lire was a personal, family business: Chef Giuliano Matarese was Brian Ellard’s brother-in-law, a native of Naples, who opened the restaurant with Brian Ellard in late 2017. Much of the menu is based on Matarese family recipes.

“Mille Lire was built around the tradition of our family, and as you can imagine, this sudden loss has affected us all,” a written statement from restaurant general manager Robert Bissell said. “… We are thankful for the support of our community. We continue to ask for thoughts and prayers for everyone involved.”

A woman at the home of Brian Ellard’s mother, Jo Ellard, said Monday that she was not ready to talk about the crash. Jo Ellard, who also owns a home in St. Petersburg, lives next door to her son and his family in Dallas.

The letter from John Paul II High encouraged mourners to attend Mass at 9 a.m. Wednesday at All Saints Catholic Church.

Steve Thelen, 58, who worked at the JLL real estate company, and his wife, Gina, also died in the crash, the company said in an email to its employees. The Plano couple’s adult son and daughter were not on the plane.

“Steve was among the best of us — a leader, partner and friend,” the email said. “Our thoughts are with his son, Kyle, and daughter, Christy, during this difficult time. Please keep them in your thoughts and prayers.”

The Thelen family said it wasn’t ready to speak publicly about their loved ones’ deaths.

Victoria Reynoso said she had worked as Steve Thelen’s assistant at JLL from 2010 to 2014. She remembered him as devoted to his family.

“I admired the love that he had for his wife,” Reynoso said. “His children were everything to him.”

Reynoso said Thelen was always generous, regularly inviting JLL administrative staff to his home and grilling for them. He was also involved as a volunteer for The Family Place, she recalled.

Mary Titus was the mixed league director for Tennis Competitors of Dallas, according to WFAA-TV (Channel 8). The league sent out an email to its members informing them of the deaths of the Tituses.

“We are shattered by this loss as I know many of you who knew the involved families are as well,” the email said, according to WFAA.

“Mary was a true champion for the Mixed League and she loved working with all of you. I cannot tell you how proud I am of all that she has done for TCD and how greatly she will be missed.”

The Dallas County medical examiner also identified one of the crew members, Matthew Palmer, 28. Public records show he lived in Fort Worth.

Palmer has a pilot’s license and was a flight instructor, but details about his role in Sunday’s flight have not been released. He and his wife, Courtney, celebrated their first anniversary in May, according to her Facebook.

The pilots had been cleared for takeoff and were communicating with air traffic control before departing for St. Petersburg, said Bruce Landsberg, vice chairman of the National Transportation Safety Board.

The plane was briefly airborne before it veered off the runway and began to roll to the left before crashing into the hangar, he said. No one was in the hangar at the time of the crash.

Searching for the cause

Sunday night, a team of investigators led by the NTSB recovered the cockpit voice recorder.

The plane was not equipped with a flight data recorder, but the contents of the voice recorder were being downloaded at a lab in Washington, D.C., Landsberg said. The voice recorder should include any communications between the crew and air traffic control, as well as conversation in the cockpit.

“The other thing we may be able to get out of — and I stress may — is there may be some background noise that is picked up by the … [voice recorder] which will give us a little better idea of what’s going on with the airplane itself,” he said.

The NTSB expects to have a preliminary report on the crash in about two weeks. It will be reviewing video from the airport’s security cameras, which captured the crash.

A full analysis of what happened, which will address maintenance records as well as records of the flight crew’s history and training, could take up to 18 months, Landsberg said.

Takeoff is a critical time

J.F. Joseph, a plane crash investigator who runs a consulting company, said it’s too early to say what caused the plane to crash after takeoff.

Joseph, who is not investigating Sunday’s crash, said the Beechcraft Super King Air is a well-liked plane, used by a large number of operators.

He said it and other planes with propellers are more challenging than aircraft with a turbofan or turbo jet engines.

A loss of thrust — the force that moves an aircraft — can affect propeller planes right after takeoff and cause a crash.

“At low air speeds,” he said, “the most critical time is right after takeoff.”

David Snell, a 49-year-old pilot who lives in Frisco, was at the Addison Airport with another pilot when the plane crashed.

It was only a few hundred feet in the air when they knew something was wrong, he said.

“I’ve been flying for 33 years, and I know the sound of a King Air when it’s taking off,” Snell told reporters after an NTSB briefing Monday. “It sounded very underpowered.”

The plane had tail number N534FF but was in the process of being changed to tail number N511EF. The NTSB confirmed Monday that the aircraft, which was about 2 years old, was owned by EE Operations, LLC.

Planemasters Jet Charter, based in the Chicago area, told The Dallas Morning News it once had owned the plane but no longer did.

Todd DeSimone, Planemaster’s general manager, told KXAS-TV (NBC5) the plane had been sold this year to EE Operations, a company based in Addison.

Attempts to reach anyone at EE Operations, which is registered in Delaware, were unsuccessful.

Landsberg, the NTSB vice chairman, said investigators did not yet know the relationship between the plane’s owner and the people on the plane. But he described it as a personal flight.