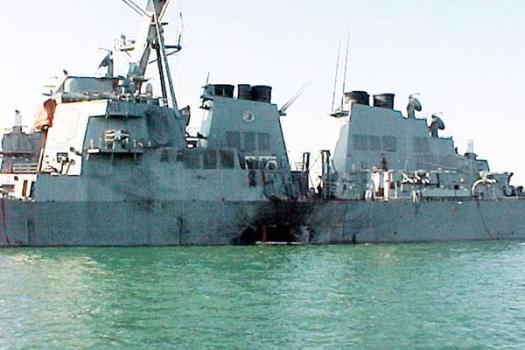 How is it possible to have a decent trial when the judges keep quiting? Remember the terrorist attack on the USS Cole in the port of Yemen? Our precious servicemen and women died in that attack!  The year was 2000.

The year was 2000, yet only recently had there been enough traction to set a trial date for January, 2019.

But even then, the January, 2019 trial became a spastic on-again, off-again ordeal, with death-penalty charges against Saudi captive Abd al Rahim al Nashiri hanging in the balance. It seemed to barely get off the ground and the presiding judge would leave.

It’s becoming a familiar pattern in these military tribunals, and we need to ask ourselves WHY. It could be just normal life circumstances similar to what we peons experience, or could there be something else going on behind the scenes? Only time will tell.

We thank The Miami Herald for their excellent article (below) 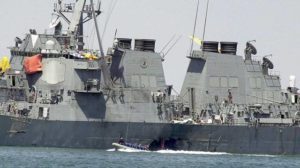 In another setback to the resumption of the USS Cole tribunal at Guantánamo, a military judge who was supposed to preside in the case has found a new job in an immigration court, the second judge in the case to do so.

In August, the chief judge for military commissions assigned Air Force Col. Shelley Schools to preside in the on-again, off-again death-penalty trial against Saudi captive Abd al Rahim al Nashiri. She was chosen to replace Air Force Col. Vance Spath, who was retiring to serve as an immigration judge too.

Nashiri was captured in Dubai in 2002, held for years in secret CIA prisons and charged in 2011. But the start of trial has been delayed by a series of structural, personnel and evidence challenges.

On January 22, a federal appellate court in Washington will hear arguments on whether Spath should have disclosed his nearly three-year pursuit of a job with the Department of Justice to become an immigration court division. He left military service last year and is hearing cases as a civilian immigration judge in Arlington, Virginia. Defense lawyers for Nashiri want all of Spath’s rulings nullified during the time he secretly pursued the job because case prosecutors appearing before him came from the Department of Justice’s National Security Division.

Schools, however, has never presided in the Nashiri case at Guantánamo as higher courts have been reviewing several questions. . War court prosecutors disclosed in a Jan. 4 appellate court filingobtained by McClatchy that Schools may never convene the case. She had applied for an immigration court judge job in April, four months before she was assigned the USS Cole case, according to the filing, and accepted the position in September to start this summer.

The prosecutors, Joseph F. Palmer and Danielle Tarin, write that Schools is to retire “in the relatively near future.” So, they write, they “would not oppose a defense request for reassignment of this case to a new military judge when military commission proceedings resume.”

The next judge would be the fourth U.S. military officer assigned to handle pretrial proceedings in the capital case against the alleged architect of al-Qaida’s suicide bombing of the U.S. Navy warship off Aden, Yemen, on Oct. 12, 2000. Seventeen American sailors died and dozens more were injured when two men pulled an explosive-laden skiff alongside the destroyer and then blew it up.

There is a growing backlog of some 800,000 immigration cases pending and members of Congress have called for a hundreds of judges to be hired. 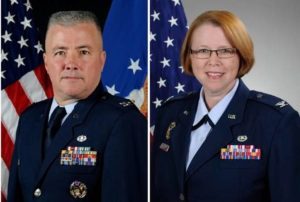 At left, Air Force Col. Vance H. Spath, before he retired to become an immigration court judge in Arlington, Va. At right Air Force Col. Shelly W. Schools, who was appointed in August to replace him, who likewise has secured post-retirement employment with the Department of Justice as an immigration court judge, a job pursuit that defense lawyers in the USS Cole case could present a conflict of interest.

Carol Rosenberg reports on the U.S. base and prison at Guantánamo Bay, Cuba. She joined the Miami Herald staff in 1990 as Middle East correspondent. Her Guantánamo coverage has received the Robert F. Kennedy Journalism Award and the ABA Silver Gavel among other honors. She was also part of a Herald team that won the Pulitzer Prize for Breaking News coverage in 2001.