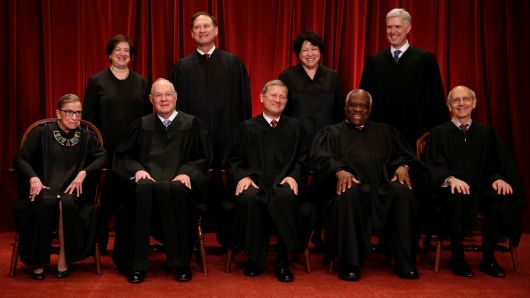 He said this judicial nomination will trump the meeting with Kim Jong Un, tax cut legislation and Trump’s moves to deregulate the economy.

“This moment is the biggest opportunity so far,” said Wallace, since 81-year-old Kennedy was the deciding vote many times in the middle of four conservative justices and four left-leaning justices.

He said Trump’s second Supreme Court nomination, if confirmed by the Senate, could change the complexion of the court “for a generation or two.”

“This is a very big deal,” said Wallace, pointing to his interview this past week with Leonard Leo of the Federalist Society as his “Fox News Sunday” Power Player.

Leo told Wallace that the Federalist Society has an extensive list of recommended Supreme Court justice picks and Trump “could throw a dart” at it and hit a “solid” conservative for the high court.

Wallace emphasized that Kennedy was the swing vote protecting abortion rights and was the key vote on same-sex marriage decisions.

“Replacing him with a solid conservative is enormously important,” he explained.

Kennedy announced Wednesday that he plans to retire on July 31.

This C-VINE News article was either found from another news source, or put together by our C-VINE team of volunteer investigative, citizen journalists, who make certain all information is vetted for accuracy before publishing. C-VINE News is run by, “We the People” and distributed without profit, but for educational purposes.