The Great Awakening Is Happening Thanks To The Deep State 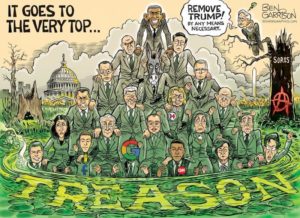 The Deep State is all about controlling the people. Since President Trump took office, he has been exposing their crimes through their power-grabbing attempts. They wanted the country to be shut down until elections, but in spite of the coronavirus and the economy crash, Trump began opening up the country in April. We saw no second wave of the pandemic.

Since the virus didn’t work, the DS decided to create a race-war to take back control. They paid Antifa to create millions of dollars of destruction on America. The ‘One Million Mob March’ they set for Washington DC, failed.

The Patriots know the DS’s playbook and this is why Trump is always steps ahead. He has been using counter measures to fight the DS. Trump and the Patriots need to take these same plays for what lies ahead. Exposing the scandals of the former ‘scandal-free administration’ is going to take a public awakening… a Great Awakening. What the media has hidden for decades when exposed, will shock the world.

Thousands of people are allowed to protest in the streets, but we aren’t allowed to open schools, churches, many businesses, nor even go to a funeral. They told us we had to give up our lives, our wealth, our freedoms or we’d kill ‘Grandma.’ But if they are saying riot gatherings are ok, why are we still wearing masks? Where in the world is Fauci?

We are still in lockdown because it’s a part of the Deep State’s plan. They are trying to create chaos, panic and fear just to regain control. Rioters were allowed to loot, hurt and kill people, burn down homes and churches. Does social justice matter more than social distancing? When did this change because this wasn’t the case a few short weeks ago. Now they are saying it’s ok to kill people as long as it’s for social justice. What?

Trump is not the one who undermined the US Constitution. It is every person, every elected official, who does not believe in the rule of law under our US Constitution. Who are they? Remember their names.

Why don’t elected officials want a police force and are calling to defund them?  Will they replace the police force with Sharia Law?  It is impossible for Sharia Law and the US Constitution to co-exist. Which one do you want to submit to? People are beginning to see truth. How far will we allow them to go before we take back control?

Business owners are seeing the Deep State players once again, having a different set of rules for residents and business owners, so now, the business owners are opening up saying they are ‘peacefully protesting.’ It’s all back-firing! We couldn’t have graduations, elective surgeries, we couldn’t go to movies or the beaches. All this had potential to be deadly, we were told, enough for us to be threatened with arrests if we protested. None of it made sense, but now we are seeing their lies

People are asking questions. These questions will lead to the greatest awaking in history. By November, the DS will have exposed their corruption for all the world to see. We will vote. We will win!