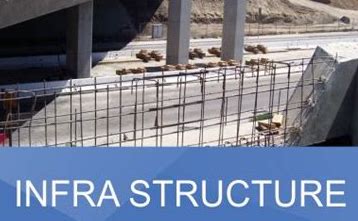 Thousands of Americans look in bewilderment as everything they worked for crumbled right before their eyes.  What didn’t collapse with a virus is now being destroy by criminals and rioters.

Contrary to the mainstream media’s narrative, President Trump began rebuilding a dying America 3 years ago and is now doing it again. Instead of relying on foreign imports, with American resources, our economy will be stronger than it has ever been before.

According to the White House, the damage caused to the economy by the CCP virus means that without intervention, the United States would likely face a sustained and protracted recovery period characterized by persistently high levels of unemployment.

The order aims to expedite transportation infrastructure projects, civil works projects from the Army Corps of Engineers, and infrastructure and other projects on federal lands.

According to the order, the Council on Environmental Quality (CEQ) has, in emergency situations, provided flexibility to government agencies in complying with the National Environmental Policy Act (NEPA)—a law environmentalists view as essential in determining the environmental impacts of infrastructure and other projects.

According to the executive order, the CEQ’s regulations “provide that when emergency circumstances make it necessary to take actions with significant environmental impacts without observing the regulations, agencies may consult with CEQ to make alternative arrangements to take such actions.” Such emergencies would include, among others, natural disasters, threats to national defense, “and employment and economic prosperity.”

President Trump claims that ordering state agencies to speed up permit acquisition for companies in a range of fields, such as infrastructure and energy, will encourage investment and return jobs to an embattled economy. His plan calls for highway and bridge construction, public works, and energy projects such as pipelines and LNG terminals to be fast-tracked through the permitting process. The responsible agencies are to get the ball rolling within 30 days on projects that have the capacity to kick-start the economy.

On Jan. 9, Trump announced that his administration would seek to cut what he called “job-killing regulations” in the form of federal permitting and approval processes, which meant that some infrastructure projects were being subjected to delays of decades before construction could begin—if approved at all.

“We want to build new roads, bridges, tunnels, highways bigger, better, faster, and we want to build them at less cost,” he said, adding that: “We’re going to have very strong regulation, but it’s going to go very quickly. And if it doesn’t pass, it’s going to not pass quickly. It doesn’t have to take 10 years or much longer than that.”

Many of the delays Trump spoke about were due to the National Environmental Policy Act (NEPA) which requires federal agencies to assess the environmental impacts of federal projects—a process that has become more complex and protracted over the years. Key components of NEPA’s environmental protections include the requirement for (often lengthy) environmental impact assessments and public consultations.

Referring to the CCP virus crisis as “the national emergency,” Trump has now ordered that “agencies, including executive departments, should take all appropriate steps to use their lawful emergency authorities and other authorities to respond to the national emergency and to facilitate the nation’s economic recovery.” This would include taking “all reasonable measures to speed infrastructure investments and to speed other actions in addition to such investments that will strengthen the economy and return Americans to work.”

Will the Environment Suffer?

The move to fast-track a host of infrastructure projects met with some resistance, with House Speaker Nancy Pelosi saying she was disappointed by the move.

“By using the coronavirus pandemic to justify fast-tracking potentially wasteful, dangerous, or destructive infrastructure programs, the president has proven once again his utter contempt for our laws, for the health of our communities and for the future of our children,” she said.

The order also came in for criticism from Sen. Tom Carper (D-Del.), the top Democrat on the Senate Environment and Public Works Committee.

“By allowing projects to plow ahead without public engagement or input, this executive order will fast-track projects that could tear through communities, harm air quality, endanger drinking water sources, destroy critical habitats, and threaten endangered species.”

Getting America Back to Work

Sen. John Barrasso (R-Wyo.), chairman of the Senate Committee on Environment and Public Works, said he was keen to see America’s infrastructure rebuilt.

At a hearing titled “Infrastructure: The Road to Recovery,” Barrasso said: “As Congress considers what can be done to help the economy recover, funding our nation’s infrastructure should be at the top of the list. Investments in highways and bridges create jobs, reduce costs of goods and services, and grow the economy.” 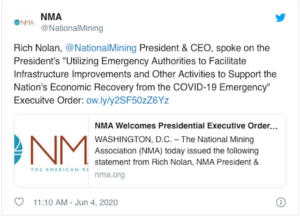 “Infrastructure does not exist without mining,” he said. “Whether it’s copper for wiring, metallurgical coal required for steel-making, or zinc for galvanization, our transportation, water supply, and energy infrastructure systems simply cannot be built or updated without mined materials. Today’s executive order provides an opportunity to jump-start our economic recovery by ensuring that we are rebuilding and modernizing with American-made materials, equipment, and jobs.”

Nolan said that permitting reforms would help U.S. companies to develop domestic mineral reserves instead of relying on imports. “Now is the time to rebuild the supply chains essential to our infrastructure, national security, and the future health of our economy,” he said.